Could AUD/CAD extend rally despite BOC being more hawkish than RBA?

Although at the moment the Bank of Canada is clearly more hawkish than the Reserve Bank of Australia, the recent sell-off in oil prices has dented the appeal of the Loonie a little. Meanwhile economic data from Australia has improved – as indicated, for example, by the 32,800 jump in October employment – while hopes have risen that the nation’s largest trading partner, China, will soon end its trade dispute with the US.

The AUD/CAD is an interesting pair to watch over the coming days. Although at the moment the Bank of Canada is clearly more hawkish than the Reserve Bank of Australia, the recent sell-off in oil prices has dented the appeal of the Loonie a little. Meanwhile economic data from Australia has improved – as indicated, for example, by the 32,800 jump in October employment – while hopes have risen that the nation’s largest trading partner, China, will soon end its trade dispute with the US. As a result, the Aussie has bounced back a little. Whether or not the AUD/CAD will be able to sustain its rally will now depend to a large degree on the US-China trade talks and the direction of oil prices.

But for the time being, the AUD/CAD is displaying bullish characteristics and the path of least resistance remains to the upside. Indeed, we have seen some bullish technical developments of late. Among other things:

Thus, price action is objectively telling us that the trend has indeed been bullish. Going forward, traders may wish to watch the following technical levels closely:

So, in a nutshell, the path of least resistance is to the upside for the AUD/CAD and we could see further short-term gains. But we would drop our bullish view in the event price breaks back below the pivotal level of 0.9490, or shows a clear reversal sign at higher levels first. 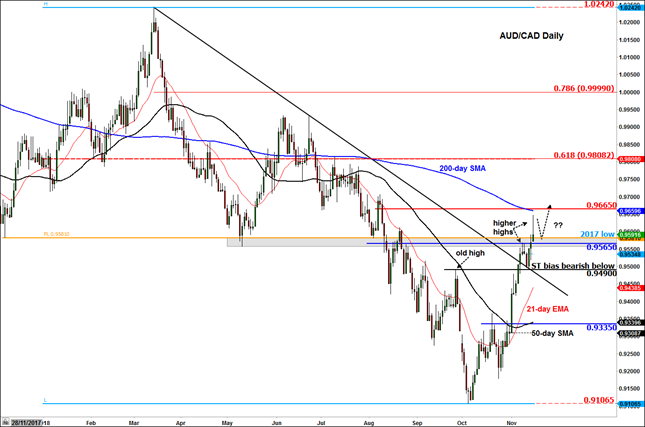