Over the past several weeks, prices have stabilised across the board as fears over the clampdown on crypto exchanges abated.

With four central bank meetings and some top-tier data to look forward to as well, things could get quite interesting in the markets this week. But at the start of the week, there’s not much clarity with the dollar continuing to push higher against commodity currencies but trading mixed against the European currencies. While the dollar decides on its direction, it might be a good idea to look at FX crosses, or something completely different like crypto currencies, which continue show signs of revival. The carnage that started towards the end of last year, which wiped out many weaker hands, has come to an end – at least for now, anyway. Over the past several weeks, prices have stabilised across the board as fears over the clampdown on crypto exchanges abated. Bitcoin has managed to recover from sub $6000 to trade above $11500 at the time of this writing. It has almost doubled in price, in other words. Among other cryptos, Ripple is also catching the eye today after going back above $1 to trade at $1.0645 at the time of writing. Other cryptos including Neo, Litecoin, Bitcoin Cash and Ethereum, all look a bit quiet, however.

Crypto currencies are among the most technically-friendly markets out there. Part of the reason for this may be because it is almost impossible to value Bitcoin using fundamentals. As a result, we prefer technical analysis over fundamental analysis when it comes to Bitcoin. In this regard, I concluded in my previous note on Bitcoin that the digital currency was looking like it was trying to form a base, but that it still needed to repair further damage before one could conclude that the corrective trend is over. Well, the bullish consolidation since last week means that the corrective bearish trend line has now been taken out. In this regard, the bulls have definitely gained some ground. However, the upper end of the $11200-$11800 resistance range has not been taken out yet. But if recent price action is anything to go by then it could be just a matter of time before BTC/USD goes above this area. That being said, we would be quick to drop our short term bullish views in the event price does not conform our analysis.

The previously-mentioned $11200-$11800 range is important in that it had previously offered both support and resistance. But with the trend line broken and price moving above the 50-day moving average, not to mention the 200-day average and the long-term trend line, the path of least resistance remains to the upside. We may get further confirmation in the event Bitcoin goes above that resistance range. In this potential scenario, Bitcoin could take off again with the next bullish objectives coming in at $12800 (50% of the drop from near $20K), $14400 (61.8% Fib against the all-time high) and $15500, an old support and resistance level.

Meanwhile support for Bitcoin is now seen around the lower end of the abovementioned range at $11200. However if this level does not hold then Bitcoin may drop towards the next pivotal area between $8950 and $9500, an area which was previously support and resistance. The upper end of this range has already been successfully tested. The next potential test might lead to a breakdown. 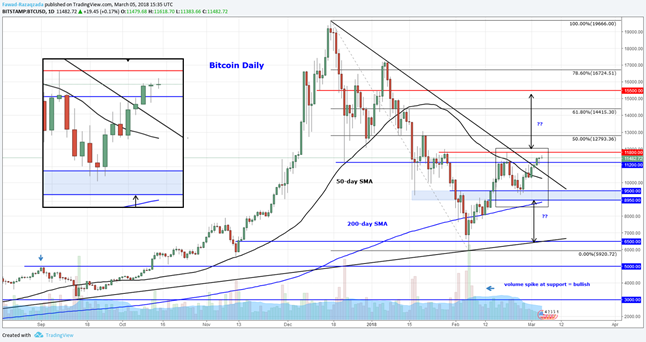