Could EU stocks find some much needed love?

With the US out celebrating thanksgiving holiday today, the afternoon session should be a quieter one. This morning, though, volatility has remained elevated as the pound surged higher on the back of a leaked draft text on the UK’s future relationship with the EU after Brexit. Meanwhile, European stock indices started well into the red despite yesterday’s sharp rebound. But despite today’s pullback, a sizeable rally for stocks could potentially be on the way soon – if not today, then perhaps in the near future.

Granted, there has been no major fundamental development to help shore up investor confidence. However, the stock markets could still rise nonetheless, for a start on the back of short covering given the extent of recent falls. But the potential rebound need not be a short covering rally. With the global economy apparently slowing down again, and given the risks stemming from the Italian budget and Brexit, to name but a few, central banks may decide against tightening their respective monetary policies aggressively in order to avoid another downturn. Indeed, there is a real risk that the German economy could fall into a technical recession after it contracted more than expected in the third quarter. Consequently, Friday’s Eurozone PMI data will be scrutinised closely. The recent slowdown of growth here is in part due to the emerging market currency crisis hitting demand for exports of luxury goods. With EM currencies still not much higher from their worst levels hit in the summer, and given the potential for further escalation in the US-China trade dispute, demand could be hit even more – although the downside risks may well have been priced in by now. In fact, a couple of Federal Reserve members have already expressed concerns about these risks last week and hinted at the prospects of slower rate hikes going forward. Meanwhile, inflationary pressures stemming from the crude oil market should also be weakening given the big recent falls for Brent and WTI amid concerns over excessive supply and slower demand growth for the black stuff. This is an additional reason why central banks may decide to keep monetary conditions extremely loose for the foreseeable future.

While we still haven’t seen a clear reversal pattern for the major indices as none of them have broken a previous high to form a higher high – a prerequisite for us to turn bullish – there has been tentative signs that the selling pressure may be easing a little. Indeed, the FTSE managed to rally yesterday and created an apparent bullish picture in that it formed a higher low relative to its low at the end of October. Meanwhile other European indices, such as the DAX, also closed in the green. However, the German benchmark stock index still created a lower low for the year before bouncing back sharply. The FTSE, therefore, continued to show relative strength in that it formed a higher low. Granted, the UK benchmark index hasn’t showed any bullish follow-through yet, which may be due in part to today’s sizeable rebound in the pound, but it could still turnaround and outperform its peers. Technically, the FTSE is still holding that long-term support in the 6900 region, so there is indeed a good chance it could stage a recovery here. That being said, we would certainly not rule out the possibility for even more short term pain than gain for stock market bulls given that the trend for the global indices is currently bearish. In other words, momentum could potentially push the indices further lower in the short term. But we are now on the lookout for bullish price action to emerge. 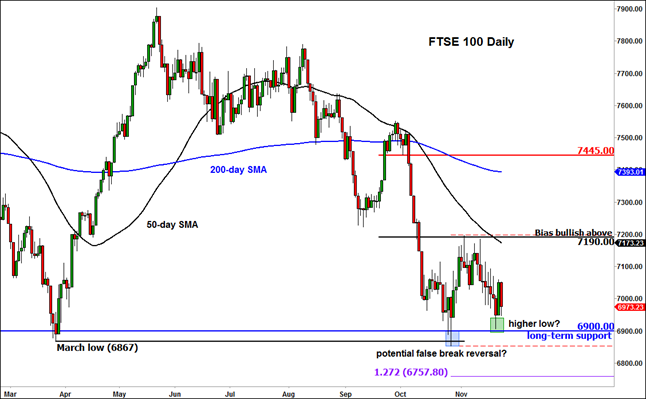 Source: eSignal and FOREX.com. Please note, this product is not available to US customers.