Could GBP/USD surge higher this week?

Despite the EUR/USD’s lack of response to the PMI data, some of the euro crosses such as EUR/GBP, EUR/JPY and EUR/AUD weakened. The EUR/GBP’s move lower supported the GBP/USD. The GBP/USD may now play “catch up” and follow the footsteps of the EUR/USD from last week...

The Eurozone flash PMIs released this morning were mostly weaker than expected. Yet there was little reaction in the EUR/USD, which actually started to come off the lows having started the day on back foot following its sharp gains last week. The EUR/USD broke to a new 52-week high last week after the ECB gave no indications that it was worried about the strength of the single currency and suggested that the future of the QE stimulus programme will be discussed in the September meeting. Despite the EUR/USD’s lack of response to the PMI data, some of the euro crosses such as EUR/GBP, EUR/JPY and EUR/AUD weakened. The EUR/GBP’s move lower supported the GBP/USD.

The GBP/USD may now play “catch up” and follow the footsteps of the EUR/USD from last week, for as long as (1) the EUR/GBP holds or ideally moves lower and (2) the dollar remains out of favour. The cable has now spent a considerable amount of time trading on both sides of the 1.30 handle. There was very little follow-through to the downside when it broke lower last week. This suggests to me that the market probably wants to push higher as the sellers apparently do not want to commit at these levels.

So as things stand, I am bullish and expect to see range expansion to the upside, perhaps similar to the EUR/USD price action last week. Indeed, with this almost being the last week of July, and with GBP/USD now above this month’s opening price of 1.3010 and last month’s closing price of 1.3022, it looks like we may already have seen the wick of the monthly candlestick form. Now it may be time to see range expansion and the body of monthly candle to form – similar to last month’s candle. However, if the cable ends this month below this 1.30 handle then this would invalidate the bullish idea. In the very short term, a break below last week’s low at 1.2930/35 would also be bearish.

In any case, there's plenty of key economic data coming up this week which could help accelerate the next move in the GBP/USD pair. Among others, we have UK GDP and the FOMC meeting on Wednesday, while GDP from the US will come in on Friday. 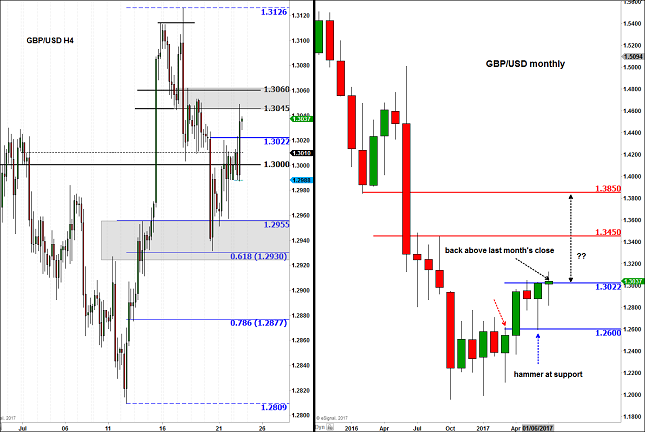