Look ahead: Could stocks and dollar resume slide?

As we start the first full trading week of 2019 now, the dollar is finding itself under pressure and stock indices are giving back some of the sharp gains made on Friday.

Investors, speculators and other market participants who were away during the festive period, are slowly returning to the markets. Those that made it back in the first week of the new year, had to hit the ground running. Stocks initially tumbled on the back of a revenue warning from Apple and as fears about the health of the Chinese economy grew, before Wall Street staged one of the best one-day gains for in 7 years on Friday. Friday’s gains came on the back of a strong jobs and wages data from the US economy, which alleviated growth concerns about the wold’s largest economy. What’s more, the Federal Reserve Chairman Jay Powell delivered some reassurance on interest rates as he said the Fed will not rush to tighten its belt further while reducing the central bank’s balance sheet was not necessarily on “autopilot,” walking back his previous hawkish comments. Stocks were supported further after China announced fresh measures to boost lending in order to halt a slowdown in the world’s second largest economy. Meanwhile there were signs of progress on the US-China trade dispute after Beijing confirmed that it would hold trade talks with the US next week. In the FX space, the US dollar fell on Friday despite news of a 312,000 gain in December non-farm payrolls and a better-than-expected 0.4% rise in average hourly earnings, as Powell’s dovish remarks gave the dollar bears the perfect excuse to exert pressure on the buck after its post-NFP bounce.

Stocks still not out of woods but pressure growing on dollar

As we start the first full trading week of 2019 now, the dollar is finding itself under pressure and stock indices are giving back some of the sharp gains made on Friday. It is not clear at this stage whether it is “risk-off” again, as some profit-taking should have been expected after Friday’s big rally in what essentially is a bearish trend for stock indices. Things should become clearer in a few days’ time as the major US indices test key technical levels, with the S&P 500, for example, deciding whether to hold below or break back above February 2018 low around 2532. In addition, the fourth quarter US earnings season is set to unofficially start next week. If we see more misses than beats then the selling pressure could resume again. Meanwhile as far as the dollar is concerned, sentiment is slowly turning bearish on the buck as investors continue to push their Fed rate hike expectations further out, and prepare for potential tightening from the likes of the European Central Bank and Bank of England. The CFTC’s latest positioning data shows speculators are still heavily net long the dollar, which may not be a great sign for the buck going forward. Profit-taking from this group of market participants could unravel the dollar-rally. In fact, the Dollar Index may have already started its bearish trend, as it has broken outside of its bullish channel, as per the below chart.

Going forward, investors will be watching trade developments between the world’s largest economies closely again after Presidents Donald Trump and Xi Jinping agreed last month to a trade truce on the sidelines of the G-20 summit in Argentina. Meanwhile, be prepared to be bombarded with Brexit-related headlines as UK Parliament returns from the Christmas holiday with the rescheduled “meaningful vote” on Prime Minister Theresa May’s withdrawal agreement deal due to take place, most likely, on Tuesday 15th January next week. Although a lot could go wrong, the GBP/USD is inching higher for now as the dollar sells off.

US CPI and BOC among fundamental highlights this week

In terms of this week, don’t expect too much reaction from the minutes of the FOMC’s December policy meeting, which will be released on Wednesday. At that meeting, the Fed decided to raise interest rates for the fourth time in 2018 despite pressure from Trump and signalled just two rate rises in 2019. However, the minutes will be dated as we have already heard from the Fed Chair on Friday, when he walked back his remarks on the Fed’s balance sheet reduction being on autopilot. Jay Powell is expected to speak again on Thursday at The Economic Club of Washington DC. As far as this week’s scheduled economic data is concerned, we will have the ISM services PMI later today but the key US data will probably be Friday’s publication of consumer price inflation. Investors will be watching for signs that inflation is slowing down as they try to determine the Fed’s next move on monetary policy. On Friday we will also have UK GDP and manufacturing production data, although the markets are unlikely to react too much on this as the focus will be firmly fixated on Brexit. Meanwhile, the Bank of Canada’s rate decision is on Wednesday. Previously, the BOC was expected to hike rates to 2.0% at this meeting, but now the market expects the central bank to keep rates unchanged at 1.75% after a strong hint from the bank’s Governor at the end of last year. 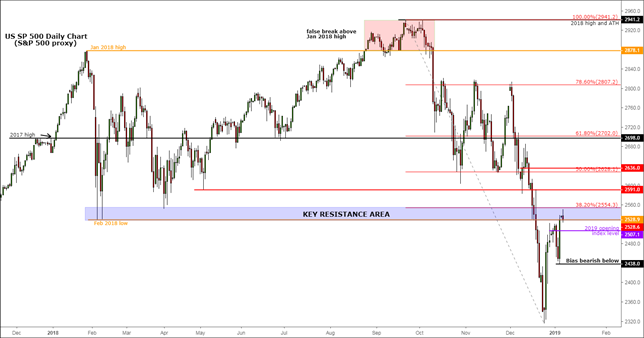 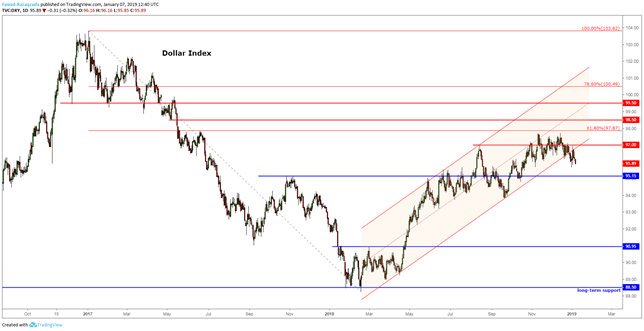