European stock markets have started Friday’s session brightly, extending their advance from the late afternoon rebound on Thursday. The rally has probably taken many people by surprise, although this shouldn’t be the case given that the markets in both the UK and US are still very close to their all-time highs. There is a reason why the markets are still elevated despite all the doom and gloom out there, and it continues to be this: cheap central bank money.

European stock markets have started Friday’s session brightly, extending their advance from the late afternoon rebound on Thursday. The rally has probably taken many people by surprise, although this shouldn’t be the case given that the markets in both the UK and US are still very close to their all-time highs. There is a reason why the markets are still elevated despite all the doom and gloom out there, and it continues to be this: cheap central bank money. Although the Fed looks almost certain to raise rates in December, central banks elsewhere will remain extremely accommodative – not least the Bank of Japan and the Bank of England. The focus will be on the European Central Bank next week and market participants will want to know whether policymakers here have started discussing the prospects of tapering ECB’s QE stimulus programme. If Mario Draghi again denies this and delivers a dovish message then we could see further gains for the European markets.

Meanwhile in the US, the quarterly earnings season has gotten off to a bad start but that could change if banks produce better results, starting with JP Morgan, Citi and Wells Fargo later on today.  Of course, it is possible that US bank earnings will disappoint expectations and that could derail the rally on Wall Street. The strengthening of the dollar may mean that future earnings when repatriated back to the US currency will cause earnings to weaken. This and the US presidential election are additional uncertainties which could weigh on risk appetite in the US.

However, in the UK, the slumping pound means earnings in sterling terms will be stronger than would otherwise be the case. For that reason, I think that the European stock markets, the UK in particular, will outperform the US in Q4.

As well as earnings and the ECB, there will be plenty of domestic data in the UK to look forward to next week, which includes CPI inflation, employment, wages and retail sales figures. It must be pointed out though that UK assets seem to have decoupled from the economy as the focus is currently on politics. But the FTSE, and the stock markets in general, will nevertheless respond to important economic pointers from China – which include GDP and industrial production figures on Wednesday – provided that they are not bang in line with the expectations.

Now the FTSE has, for now, been able to defend its key support area in the 6930/55 region after its attempt to push to a new record high on Tuesday was rejected forcefully as the longs took profit and the sellers showed up at this critical juncture. But as before, for as long as this 6930/55 area holds, the technical bias remains bullish in the short-term outlook. This area had been strong resistance in the past and it also where the support trend of the bullish channel comes into play. Thus, the rebound on Thursday from this key level makes technical sense. The FTSE’s lethargic attempts to push to new unchartered territories may mean that the bullish trend is losing momentum, which is something the negatively diverging RSI is currently pointing to. As things stand, a clean break to a new record high above the 7120/30 area is needed to re-affirm my bullish view. However If 6930/55 breaks first then all bets would be off, in which case I would then expect to see some sort of a correction. 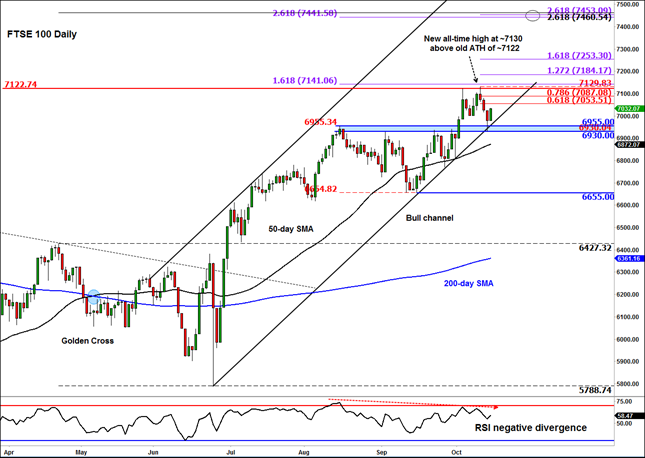