Could USD/CAD stage a surprise comeback?

It has made back the losses suffered on the back of Friday’s stronger Canadian jobs data and weaker US employment figures. What’s more, the commodity currency has failed to track oil prices higher, despite both Brent and WTI rising sharply in recent days. This may suggest that FX market participants are not convinced that the rally in oil may be sustainable.

At the time of this writing, the US dollar was still down against most major currencies. The greenback fell on the back of an earlier report from Bloomberg – citing people familiar with the matter – that China is considering reducing or halting its purchase of US government debt.  While the dollar has fallen against most currencies, it has still outperformed the British pound and the Canadian dollar. The USD/CAD actually managed to close higher both on Monday and Tuesday, and as mentioned, is higher again today. It has made back the losses suffered on the back of Friday’s stronger Canadian jobs data and weaker US employment figures. What’s more, the commodity currency has failed to track oil prices higher, despite both Brent and WTI rising sharply in recent days. This may suggest that FX market participants are not convinced that the rally in oil may be sustainable. We also think that oil prices may head lower, as we discussed it in our oil report yesterday HERE. So price is refusing to do what it “should” be doing. Usually this is a bullish sign. But for us technically-minded analysts and traders, the USD/CAD needs to break and hold above the 1.2500/15 resistance area in order to suggest that the buyers are back in control in this pair. However if the Loonie starts heading lower from this previous support area then we would have to put our bullish idea on hold. So it is one to watch for now. 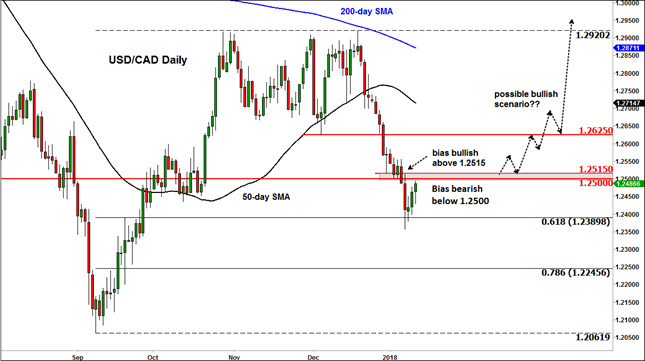