Following four consecutive weeks of gains, crude prices have turned lower this week as momentum-chasing oil speculators banked profit after both Brent and WTI contracts hit three-year highs. At the time of this writing though oil prices had turned green on the day, but still remained red for the week. Prices had rallied on the back of noticeable de-stocking of crude inventories, owing in part to reduced crude production from the OPEC and Russia. But we reckon that the upside is now limited for oil prices and there is a possibility prices may have already formed a short-term peak. Most oil market analysts, ourselves included, think that US oil producers will ramp up production in the coming months. In fact, the US Energy Information Administration (EIA) reckons that US shale oil output will increase by a good 111,000 barrels per day next month to 10 million bpd and that it will rise to about 11 million bpd by the end of next year. This would but the US on par with Saudi Arabia and Russia's output. Indeed, the signs that oil production may rise are all there. At the end of last week, for example, Baker Hughes reported that the US oil rig count rose by another 10 to 752, putting them at the highest level in over six months. Perhaps the sell-off could be triggered on signs that the recent declines US oil inventories is over. Could the American Petroleum Institute (API) tonight or the EIA tomorrow produce such data? Last week, though, both agencies reported drawdowns in US crude stockpiles for the eighth consecutive time. Will it be different this week?

On Friday we reported HERE that Brent had formed a reversal-looking price candle when it probed liquidity above its previous swing high of $69.60 hit back in 2015. While Brent is still below this level, it hasn’t suffered further declines. So it remains to be seen if the London-based oil contract has indeed topped out. Meanwhile the WTI contract remains above its corresponding level of $62.55 for now although it too has shown some short-term weakness signs after breaking below $64.10/15 support. Once support, this level has offered some resistance for WTI today, although we haven’t seen a significant move away from this level yet. But should support at $63.40/5 area break down in the coming days then that could see price retreat back towards $62.55 and possibly lower. The technical outlook on WTI would turn bearish if it goes on to take out support at $61.35. 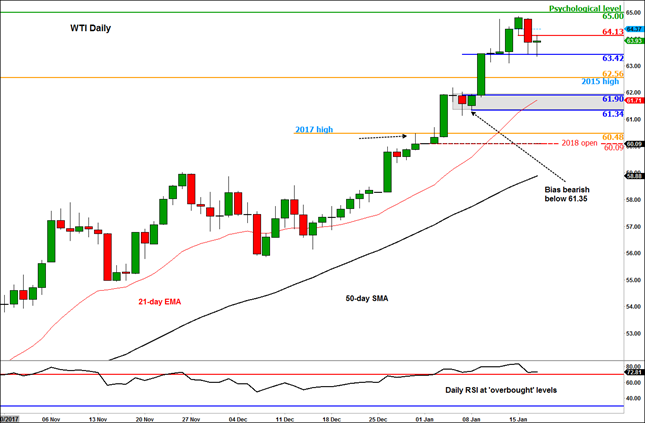