CRUDE: Brent oil about to rip?

The price of oil may have started the new week on the back foot, but that could change very quickly if I am reading the charts correctly.

The price of oil may have started the new week on the back foot, but that could change very quickly if I am reading the charts correctly. Technically, Brent remains in an uptrend and unless something changes fundamentally I think crude oil prices are about to rip. As well as price making higher highs and higher lows, all of the major moving averages are pointing higher, too. Don’t get me wrong, I am NOT a big fan of using moving averages, but they nonetheless tell us objectively the direction of the trend. One could argue that the failure of Brent oil to hold above the 2016 high of $58.35 at the end of September may be bearish. Though that may be the case, price action since then does not really conform to that theory. Take, for example, that long-legged inverted doji candle that was formed on the weekly chart when price failed to hold above last year’s high. If oil was going to go lower, (1) it should have moved significantly lower by now and (2) the low of that candle should have held as resistance. But as can be seen on the chart, there was very little follow-through and by the following week, Brent had already formed a bullish engulfing weekly candle. Last week’s price action confirmed the bullish reversal as Brent prices held above the prior week’s range. At the start of this week, oil has traded lower, but if and when we move back above Monday’s high of around $57.90 then we may see the week’s range expand to the upside. I think in the short-term, Brent oil will want to go above that weekly doji candle around $59.50 where many sellers’ buy stop orders may be resting. The cluster of orders there may act as a magnet and pull price towards it. My slightly longer-term objective is the Fibonacci extension convergence area around $62.15, where the 1.272% and 161.8% extension levels of the previous corrective price swings meet. But first thing is first, let’s see if Brent will be able to clear intermediate resistance in the range between $57.90 (Monday’s high) and $58.35 (2016 high). If and when price gets above this range, I think we may see a quick push to higher levels. Now, that’s all good in theory. In practice price action may not unfold the way I have envisaged. So, I do have some invalidation levels where I don’t want to see price go near, let alone break. Chief among them is $56.70, which marks last week’s low and the closing price of that doji candle on which I am basing most of this bullish analysis on. Any clean break below that level would render this bullish technical outlook invalid in the short-term. The slightly longer-term invalidation level is at $55.10, the most recent low. 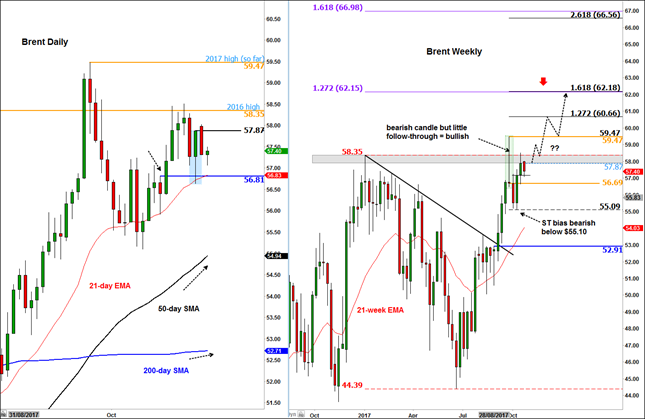