Crude: everything hinges on oil as prices test $30

Whether we like it or not, it appears as though crude oil is currently driving almost everything at the moment. It has been correlating very positively with the equity markets, which makes sense because of oil’s obvious impact on the energy stocks. In FX, the likes of the CAD, NOK and RUB have all suffered big falls, which also make sense because of the fact Canada, Norway and Russia are among the oil exporting countries. The EUR meanwhile has found support in recent times because the on-going stock market sell-off, which is undoubtedly made worse by the falling price of oil, means that traders are unwinding their carry trades. The volatility in oil prices is therefore currently having an indirect impact on the euro, too. So whatever you are trading, lose focus of oil prices at your peril!

Yesterday, oil prices suffered a fresh blow after the US Department of Energy reported a very bearish-looking weekly oil report. Contrary to data from industry group the American Petroleum Institute that was released the day before, the official report showed a build of 0.2 million barrels in inventories for the week ending January 8. Although admittedly this was a very small build, this was still way off the API’s estimate of a 3.9 million barrel drop. In addition, crude stocks at Cushing reached a record high while stocks of oil products also jumped, with gasoline inventories rising by 8.4 and distillates by 6.1 million barrels in the reporting week.  The data therefore suggest that in addition to oversupply, demand may not be as strong as previously thought.

Following the oil report, WTI fell to near the $30 handle while Brent momentarily slipped through this level for the first time in more than a decade. Yet, both contracts have has since managed to bounce back a tad off the lows. If, BIG IF, oil manages to rally now in spite of this latest bearish news, this would be deemed a rather bullish outcome. If this sort of news fails to make oil go below $30 then it would strongly suggest that a near-term bottom may have been formed.

However, outside of the US, the other big worry for oil speculators is Iran’s potential return to the market, which looks imminent now. Though this will almost certainly be another bearish development for oil prices as it will mean even higher global oil supply, we probably wouldn’t see a massive reaction when the deal is announced because most of the news has already been priced in. The full impact may be felt when the market knows for sure how much oil Iran will actually produce and what the response from its competitors will be. Will the OPEC accommodate for this additional supply by reducing existing output? I have serious doubts about that, especially given the increased tensions between Iran and Saudi Arabia recently. Iran may have to sell its oil cheaper in order to attract fresh customers, and this may start another price war with the other OPEC members. So, there are lots of unanswered questions and for that reason the near term outlook for oil remains bleak.

However, with oil prices at $30 and severely oversold, both contracts may be due for a short-term bounce, especially since these psychological levels also roughly correspond with the Fibonacci extension levels of previous price swings and as sentiment is currently so bearish. That being said however, the lack of a more significant bounce so far may be unnerving some bullish oil speculators and so there is the scope for further disappointment for this group of market participants. If a rally fails to materialise here then another significant drop, possibly towards $25 a barrel, could be on the cards soon.

If oil falls below $30 decisively, stocks could also further extend their declines while the euro and gold could be among the beneficiaries. Conversely, a potential bounce for oil here, could support the downbeat commodity currencies, especially the Canadian dollar, and may even provide some short term relief for stocks, too. So whatever you are trading, watch oil prices closely! 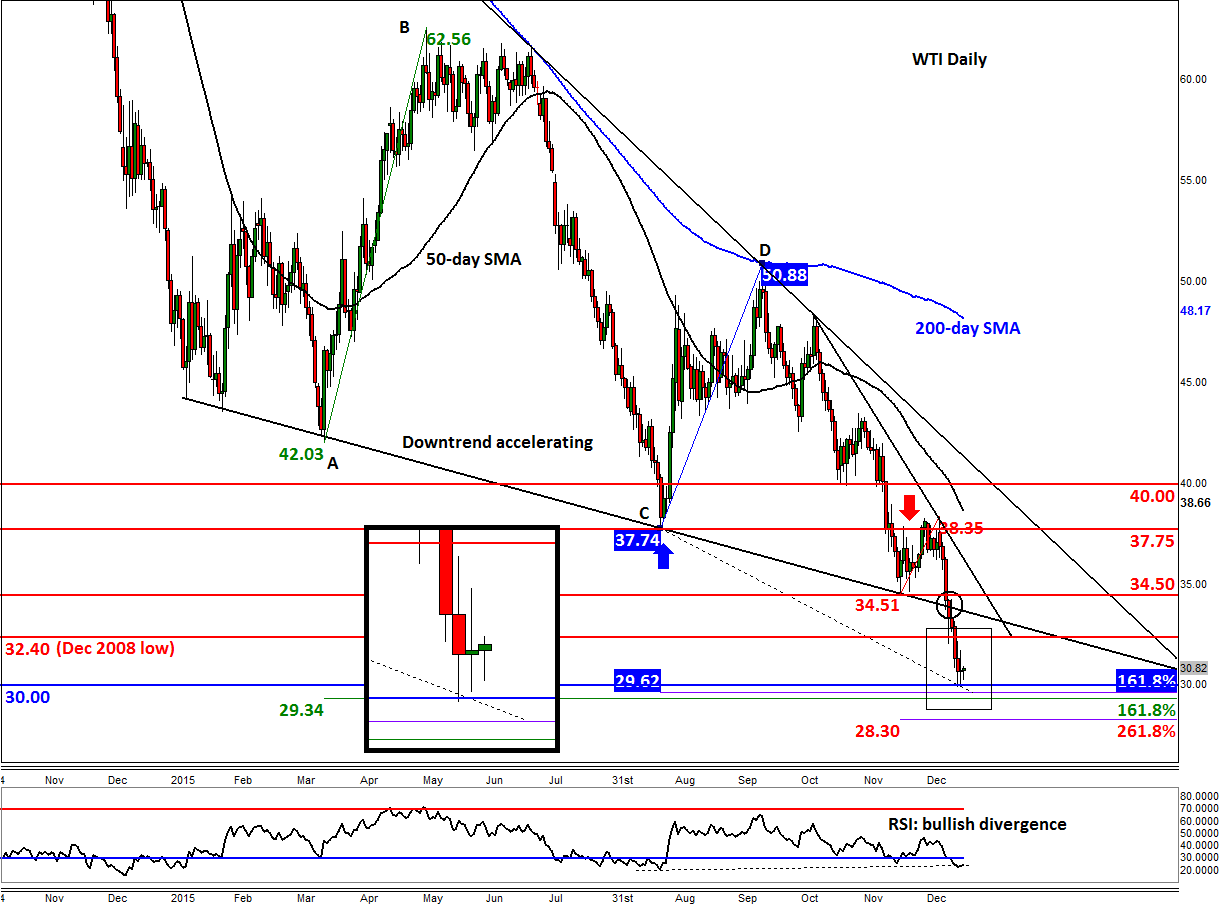 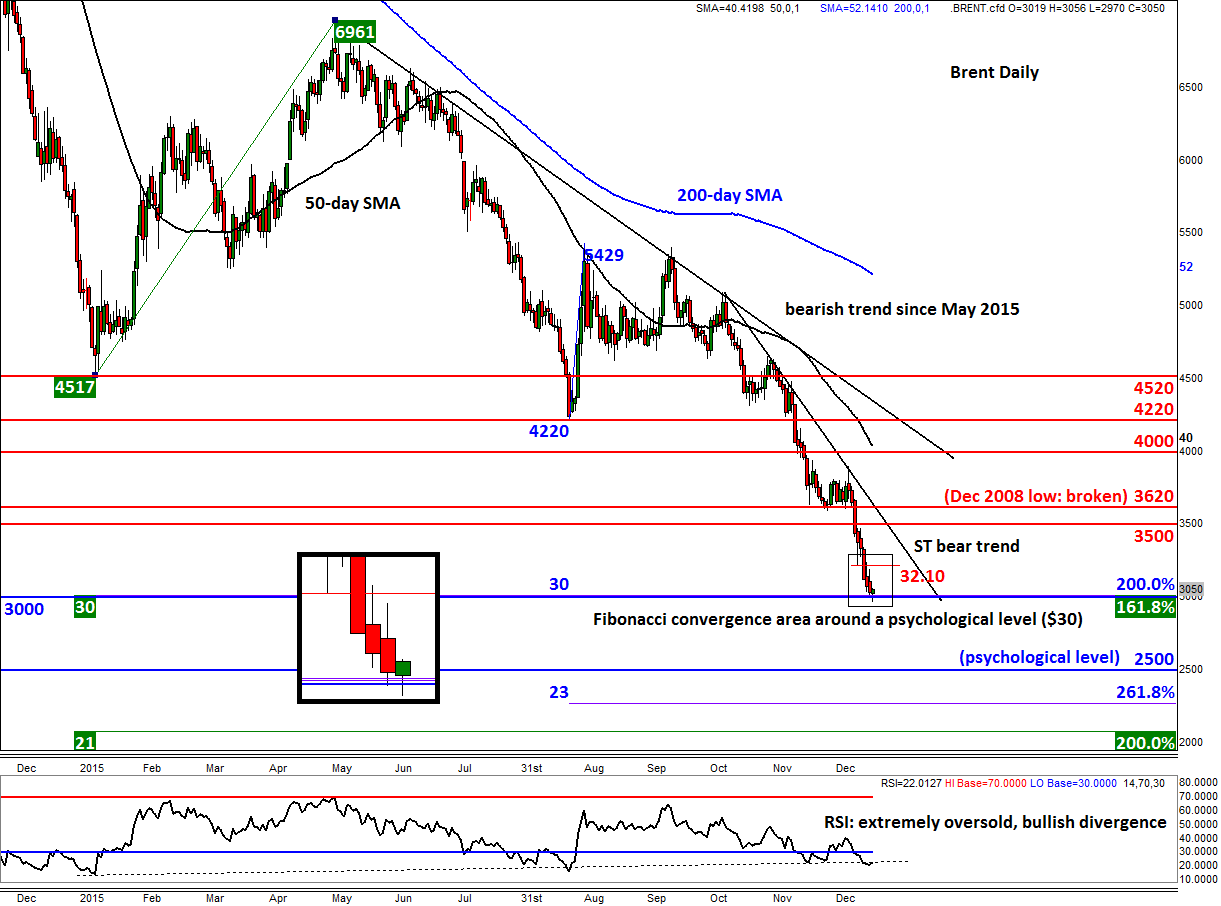