Disappointed that the OPEC refused to come up with a more audacious plan to reduce global oil supply, speculators sold crude oil aggressively yesterday. As a result, both contracts tanked nearly 5% each. The cartel's decision to extend the agreement to restrict oil production until March next year was fully expected. So there was little incentive for those who had been on the sidelines to buy crude oil.

Disappointed that the OPEC refused to come up with a more audacious plan to reduce global oil supply, speculators sold crude oil aggressively yesterday. As a result, both contracts tanked nearly 5% each. The cartel's decision to extend the agreement to restrict oil production until March next year was fully expected. So there was little incentive for those who had been on the sidelines to buy crude oil. If anything, they were correctly expecting the existing long-positioned speculators, who had been buying oil on the rumour, to sell on the news. But now that the weaker hands have been washed out, some dominant market participants are clearly taking advantage of the downbeat sentiment to buy crude oil again at discounted prices. In addition, speculators who sold oil short are taking profit. As a result, oil prices were up around 1% at the time of this writing. But the important question is what is going to happen next: are we going to witness further declines or a recovery?

Well, the OPEC and Russia’s joint efforts to restrict supply should, in theory, support oil prices. The cartel has not ruled out the possibility of a further extension of the cuts if oil stocks do not return to their five-year average by the end of the year. But with the sentiment somewhat damaged after yesterday’s big drop, the recovery process could take a while to happen. In the short-term, the focus is now going to shift back to US, where oil production have been rising again in recent weeks. Any further sharp rises in US oil production or the rig counts for that matter would only raise doubts about the efficacy of the OPEC and Russia’s efforts. That being said, US crude stockpiles have been falling over the past seven weeks, and this trend may continue as the driving season kicks into a higher gear.  So the oversupply situation is not as pronounced in the US as the weekly increases in oil production make it out to be. But the US oil situation is likely to be a long-term factor. Whenever oil prices rise meaningfully, it will become profitable for US shale producers to pump out more oil. This may limit oil prices to around $65-$70 a barrel in the long-term, we think.

In the short-term, we think oil prices will recover following yesterday’s big sell-off. Brent and WTI now need to break a few resistance levels to start the recovery process in a meaningful way. The fact that WTI has risen back above yesterday’s low at $48.50 is positive. It now needs to break $49.60 to trigger a more significant recovery. This level was an old resistance that easily gave way as a result of yesterday’s sell-off. In addition, the 50 and 200 day moving averages come in around this level. Thus a break and hold above it would technically be rather bullish. As result, WTI may then recover towards that long-term bearish trend line again, and who knows may break through it this time around. Alternatively, if WTI were to break back below $48.50 support then we may see a much larger correction before oil prices potentially recover. In this potential scenario, a drop to $46.70 would not come as surprise to us. Conservative oil speculators may wish to wait for oil prices to break one of these levels ($49.60 on the upside or $48.50 on the downside) before potentially opening a trade. 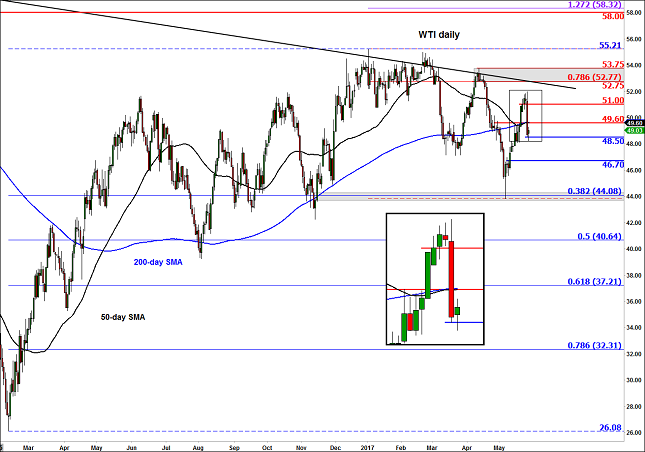