Market participants in crude oil are continuing to shrug off persistent jawboning from oil ministers of some OPEC countries, most notably Saudi Arabia, about extending the production cuts into the second half of 2017, and possibly the first quarter of 2018.

Market participants in crude oil are continuing to shrug off persistent jawboning from oil ministers of some OPEC countries, most notably Saudi Arabia, about extending the production cuts into the second half of 2017, and possibly the first quarter of 2018. They are also ignoring signs that the oil market is slowly tightening, with US oil stocks, for example, decreasing in April. Reports that floating storage decreased in the first quarter have also been shrugged off thus far. Chief among oil market’s worries is that the renewed rise in US oil production is reducing the speed at which the supply surplus is being eroded. Speculators are probably questioning whether an extension to any deal by the OPEC and some non-OPEC countries would be agreed upon again given that this would translate into a loss of market share by those participating as US shale producers are ready to pounce on any opportunity. It appears therefore that sentiment is not as bullish as it was a few months ago, and it would probably require more than just talks to get people interested in front running the OPEC again. Thus, for sentiment to turn decidedly bullish again, we will probably have to see a fundamental stimulus of some sort – specifically from the supply rather than just the demand side of the equation. Perhaps the market is waiting to find out if there will be a deeper and longer-lasting agreement by the OPEC to limit oil production. Meanwhile the charts of oil are still looking bearish. Brent, for example, has failed to reclaim the broken support area around $49.75-$50.20. Until and unless it reclaims this level, the path of least resistance remains to the downside. 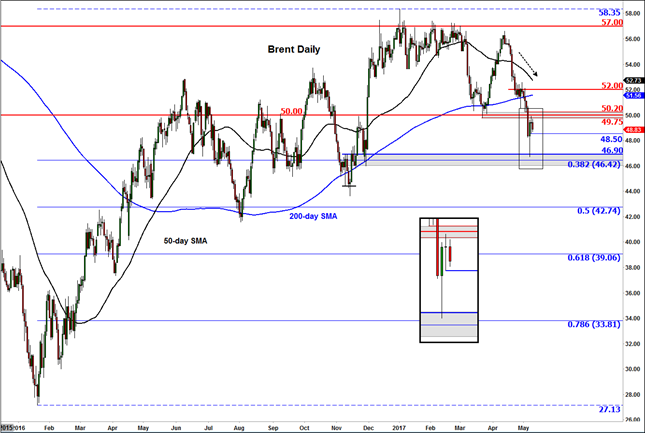