Crude oil has been boosted in part by the surprisingly large drawdown in US oil stocks, as reported by the American Petroleum Institute. Generally speaking, the focus remains fixated on the OPEC and the big deal now is whether the cartel and non-OPEC producers will honour their agreement or whether cracks will start to appear.

Both oil contracts managed to bounce back on Wednesday after suffering big drops in the first trading day of the year. Tuesday’s sell-off took most people by surprise as there was no fundamental news behind the move. It was likely triggered by a general “risk-off” trade that also caused stocks to decline. Equities bounced back along with oil prices by the very next day, but they have decoupled somewhat at the start of today’s session: oil is higher and equity markets are a little soft. Crude oil has been boosted in part by the surprisingly large drawdown in US oil stocks, as reported by the American Petroleum Institute. According to the API, oil inventories fell by a good 7.4 million barrels last week, much more than expected. If this is confirmed by official government data later on today at 16:00 GMT (11:00 EST) then crude prices may rise further as expectations are for a decline of ‘only’ 2.2 million barrels, according to Reuters.

Generally speaking, the focus remains fixated on the OPEC and the big deal now is whether the cartel and non-OPEC producers will honour their agreement or whether cracks will start to appear. I would be very surprised if producer nations breached their agreed quotas by noticeable margins because while that might be profitable in the short-term, it could be very costly in the long-term. Why sell more oil for less when there is a chance to sell less oil for more in the future? For that reason, I do think that oil prices will probably rise further in the weeks and months to come. Indeed, Iraq is already doing its part in trying to trim production by the agreed 200 thousand barrels per day, according to oil minister Jabar Ali al-Luaibi.

Thanks to a brighter fundamental outlook, oil prices made significant technical breakthrough at the end of last year as they finally broke out of their consolidation ranges. Unless prices now fall back into their old ranges, the path of least resistance remains to the upside for both contracts. Brent’s technical bias remains bullish above the shaded $52.80-$54.30 range, possibly towards the Fibonacci conflux area of $60.00-$60.50. WTI’s corresponding support range is at $50.90-$51.90 area. The latter was testing short-term resistance at $53.75 at the time of this writing. 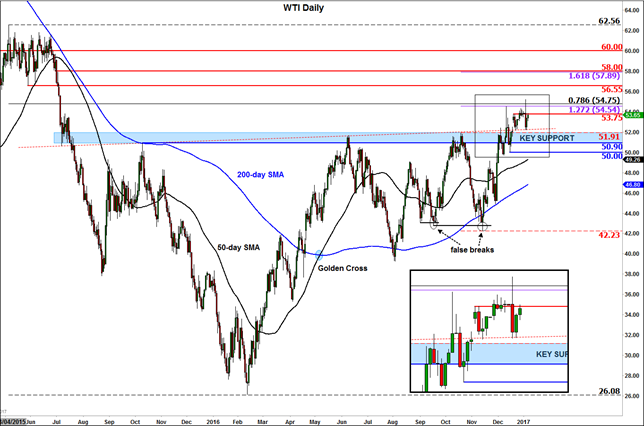 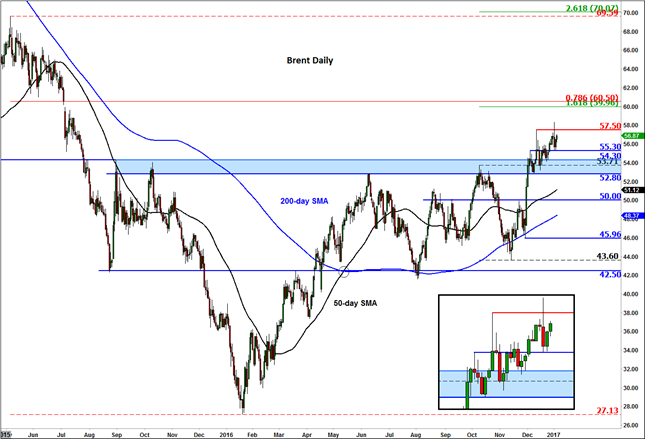