Crude oil turned volatile on conflicting reports about Iran deal earlier today, with US President Donald Trump set to announce his country’s decision in just over an hour at 19:00 BST.

Crude oil turned volatile on conflicting reports about Iran deal earlier today, with US President Donald Trump set to announce his country’s decision in just over an hour at 19:00 BST. Prices initially dropped 3% when a report by Bloomberg cited CNN suggesting that Donald Trump will not withdraw his country from the international deal offering Iran relief from sanctions in return for dropping its nuclear weapons development programme. However moments later, it was all back to square one. Oil priced jumped as it became clear that headline was not accurate. Apparently, CNN had actually reported that Trump would restore sanctions that had been suspended. Also pointing towards the US exiting the accord was a headline from New York Times which cited a person briefed on the conversation that Trump told French President Emmanuel Macron this morning that he plans to announce the withdrawal of the US from the Iran nuclear deal.

The flurry of conflicting reports meant it was a volatile session for oil, but conditions could get even more unstable once Donald Trump announces the US government’s actual position. If the US does actually pull out then oil prices could go further higher, at least in the short-term outlook. What it does next depends on the other countries. If they also exit the deal then this would be bullish for oil as Iranian oil exports will shrink again. However, it is important to note that the markets may have already priced in the potential withdrawal of the US from the 2015 agreement. What’s more they might strike some sort of a fudge deal which would effectively still allow allies to continue purchasing Iranian oil, except the US. Consequently, we may actually see oil prices drop, perhaps after an initial pop higher. In fact, this potential outcome should not come as major surprise as traders often employ or expect the “buy the rumour, sell the news” strategy.

So in the event the US pulls out of the Iran deal then I reckon Brent oil will probably go as high as $77.00-$77.50 before potentially heading lower again. This level was a previous support level that broke down back in November 2014. This is also where a 161.8% Fibonacci extension level converges, making it a key technical area. But the technical the technical outlook for oil his still bullish. That’s because Brent is still holding its own above the last low of $72.50 prior to the latest rally. In other words, it hasn’t created a lower low yet. When and if it does then we can predict with a higher degree of confidence a potential drop in oil prices. Meanwhile the momentum indicator RSI is in a state of negative divergence with price, suggesting the bullish momentum is weakening. So it may be due a correction of some sort anyway. 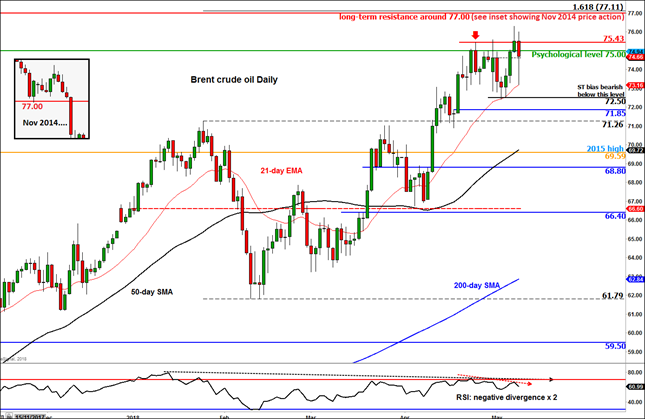