<p>This week has seen a renewed upsurge for crude oil prices sparked by several unexpected events and news that have helped alleviate ongoing oversupply concerns, at least temporarily. Factors contributing to this rise included: wildfires in Canada that have dramatically disrupted Canadian oil production, a report by the US Energy Information Administration of an unexpectedly large decrease (-3.4 million barrels) in US crude oil inventories, and a rise in the global oil demand forecast for 2016 to 1.2 million barrels per day by the International Energy Agency.</p>

This week has seen a renewed upsurge for crude oil prices sparked by several unexpected events and news that have helped alleviate ongoing oversupply concerns, at least temporarily. Factors contributing to this rise included: wildfires in Canada that have dramatically disrupted Canadian oil production, a report by the US Energy Information Administration of an unexpectedly large decrease (-3.4 million barrels) in US crude oil inventories, and a rise in the global oil demand forecast for 2016 to 1.2 million barrels per day by the International Energy Agency.

Aside from these very recent events, crude oil prices have generally been rising in a sharp uptrend channel since January as US oil production has slowed substantially. This rise has occurred despite continued high output from OPEC countries and other major oil producers, who failed last month to reach any agreement on a proposed deal to coordinate an oil production cap.

For the Brent crude oil benchmark, this week’s rebound and rise after the previous week of pullback has brought the price of oil back up to approach a major technical resistance area at $48 per barrel. This level was last reached in late February, when Brent established a new 5-month high at the top of the noted uptrend channel. The $48 level also represents the 50% Fibonacci retracement of the prolonged slide from the $70-area highs in May of last year down to January’s lows around $27. During the course of the sharp uptrend and recovery since those January lows, Brent’s 50-day moving average formed a technical "golden cross" in late April by moving above its 200-day moving average, suggesting continued bullish momentum.

Within the context of this strong uptrend momentum, however, the $48 resistance level continues to pose a key technical obstacle to a further rise. If price is able to make a strong and sustained breakout above this $48 obstacle, it could open the way towards the next major upside target at the key $54 resistance area. In the event that the $48 resistance level holds, however, Brent crude could potentially sustain a swift and sharp retreat back down towards the major $42 support level. 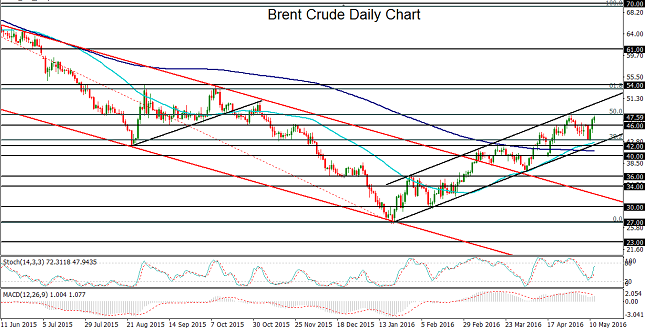