Oil prices have climbed around 2.7% so far in the session after the EU announced a phased embargo on Russian oil earlier. The plan, which needs to be ratified by all 27 EU member states, will see Russian supply of crude oil phased out within six months and crude products by the end of the year. This is part of the sixth round of sanctions on Russia due to its ongoing invasion of Ukraine and will include fresh sanctions on the country’s top bank: Sberbank is to be excluded from SWIFT.

Given the relatively small rise in Brent compared to the recent volatility of oil prices, it looks like the markets are not convinced all EU member states will approve the plan, as clearly some rely heavily on Russian oil. Indeed, Hungary and Slovakia will be excluded and will be given more time to find alternative sources for their oil needs. But this means that countries in the EU will still be able to purchase Russian oil via Hungary and Slovakia at least until the end of 2023. As a result, the damage to Russian oil exports will not be as severe as the EU hopes.

Still, the EU might be able to convince its members to ratify the plan, and prevent Hungary and Slovakia to buy more oil than they need. If so, this will have a huge impact on Russian oil exports. And given the difficultly the OPEC has had in raising its oil output of late, the market is therefore likely to remain tight for a while yet. Oil prices will thus remain supported on the dips, hurting consumer incomes and underpinning inflationary pressures.

In fact, it looks like Brent may have formed a base around $100.00 after spending several weeks in consolidation above this psychologically important level and its 21-day exponential moving average. If it manages to break cleanly above the trend line shown on the chart, then prices may find a new range between $110 to $120 per barrel. 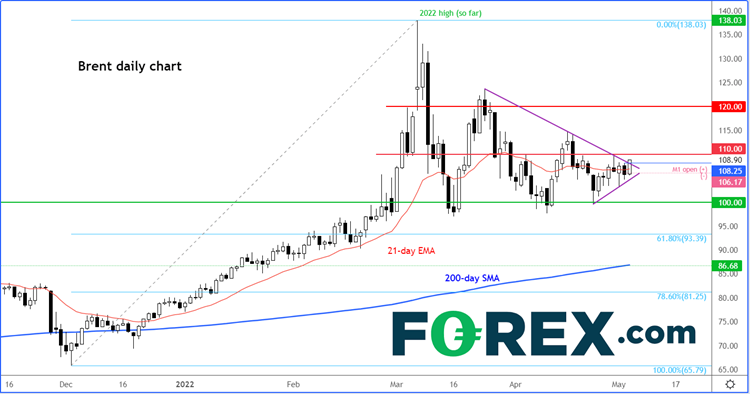 Meanwhile, the focus of oil markets will turn to the OPEC+ meeting on Thursday. Stay tuned for our preview.