This week’s mixed-bag UK economic data has caused the pound to fall against most major currencies, including the Canadian dollar which has managed to perform well recently despite the increased volatility in crude oil prices. The relatively strong performance of the Canadian dollar of late suggests that a bottom in crude is either in place or very close, or that the effects of oil price drops are dissipating. But it could also be due to the non-resources sector of the Canadian economy, which has performed well recently as acknowledged, for example, by the Bank of Canada.

A contingent agreement by major oil producers Russia, Saudi, Qatar and Venezuela to freeze their oil output at January levels has helped to stabilise the oil market. Having just seen its sanctions lifted, Iran obviously wants to win back market share and up until today they had rightly been against the idea of freezing their production levels. After all, why should they pay the price for something they had no part to play in? But today, the Iranian oil minister was quoted as saying "we look forward to the beginning of cooperation between OPEC and non-OPEC countries and we support any measure that can stabilise the market and increase prices," according to Shana. So far however it is not clear if Iran will accept not to raise its production in order to prove its commitment. But it needs to make its position clear and do so quickly for oil investors to really believe that something is being done about the oil price slump. Nevertheless, it appears as though most of the major oil producing nations are willing to freeze their oil output and if this is backed up by evidence in the coming months then we could be seeing the light at the end of the tunnel soon.

Meanwhile, economic data in the UK has been mixed this week. The latest ONS data shows, for example, that UK employment continued to rise between October and December, with earnings moderating slightly. A record 31.4 million people were in work, though the rate of unemployment remained unchanged at 5.1%. Excluding bonuses, earnings rose unexpectedly to 2.0% from 1.9%, while earnings including bonuses moderated to 1.9% from 2.0% previously. The forward-looking employment indicator jobless claims, or the change in the claimant count, fell by a surprisingly large 14.8 thousand applications month-over-month in January. On Tuesday, the CPI measure of inflation for January printed 0.3% year-over-year as expected, while core CPI and RPI both disappointed. Consequently, the data has failed to change the market’s view about the outlook of UK interest rates. Many analysts expect interest rates to remain at the current historically low 0.5% rate well into 2017.

From a technical point of view, the GBP/CAD has now broken below a major support area around 1.9850-1.9900, which could pave the way for further sharp losses. Previously this area was strong support and now that we are below here, the path of least resistance is to the downside and will remain that way until proven wrong.

The selling could really gather pace if the GBP/CAD now goes on to take out further supports. In the short-term, the 1.9550/60 level should be watched closely. As well as the 50% retracement of the last upswing, this level was previously resistance. Should it get there, the GBP/CAD may stage at least a short-term bounce, so the bears need to be wary of that possibility. The more significant support is the long-term bullish trend line, currently around 1.9350.

In the event the long-term bull trend breaks down, the 61.8% Fibonacci retracement level at 1.9225 could be the next bearish target, followed by the psychologically-important 1.90 handle. Meanwhile a potential rally back above the 1.9850-1.9900 area would completely invalidate this bearish setup. In this scenario, the cross could rally back towards its 200-day SMA around 2.0000 or previous resistance circa 2.0300. 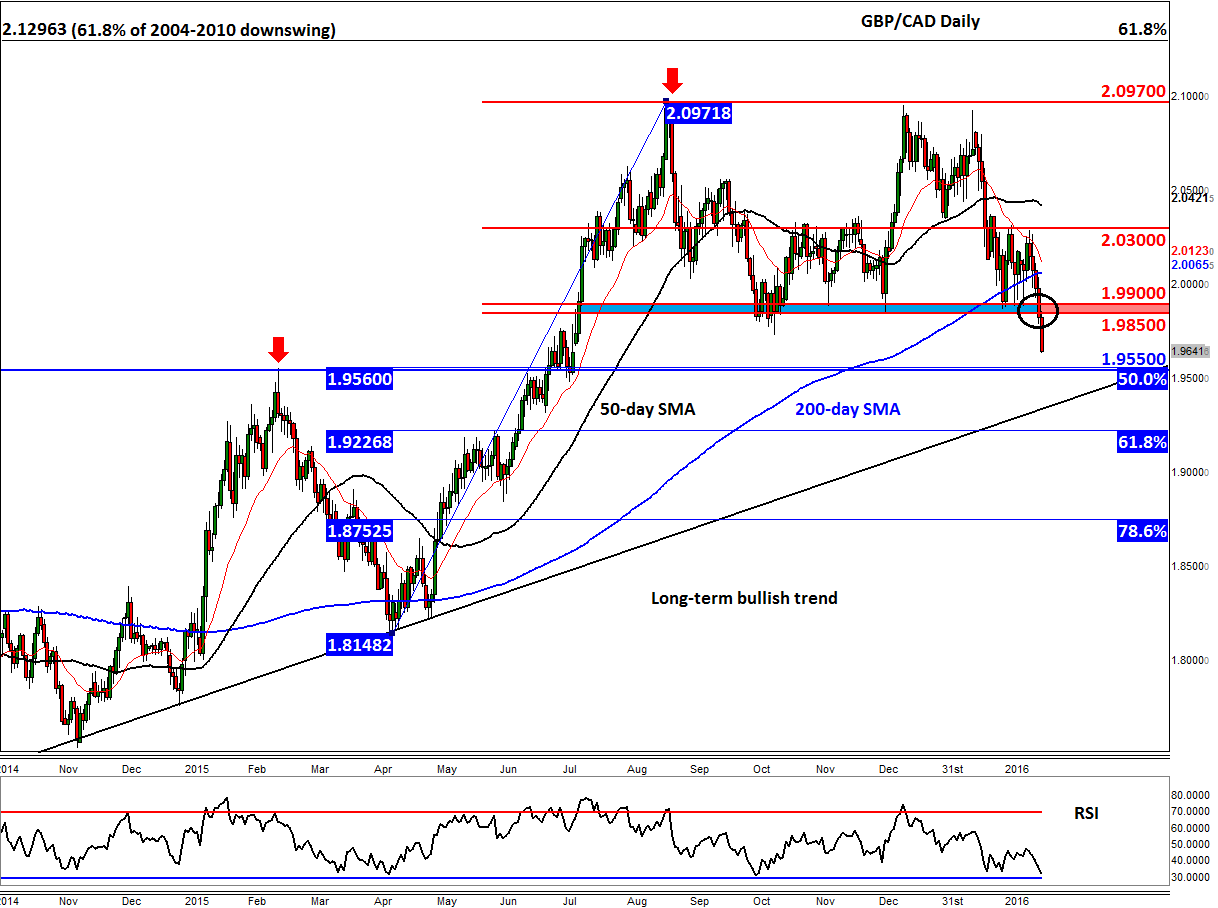