Crude oil was unable to hold onto its gains on Monday after appearing for a while to have ended its bearish run. Oil prices have fallen for three consecutive weeks after the OPEC and Russia failed to surprise the markets with their decision to extend the oil production deal.

Crude oil was unable to hold onto its gains on Monday after appearing for a while to have ended its bearish run. Oil prices have fallen for three consecutive weeks after the OPEC and Russia failed to surprise the markets with their decision to extend the oil production deal. For oil market participants, the situation in the US remains their number one worry. Here, drilling activity increased for the 21st straight time in the week to June 9, according to Baker Hughes. This suggests that US shale oil production will continue to rise. Indeed, according to the US Energy Information Administration (EIA), US oil output is likely to rise for the seventh straight month to a record 5.48 million barrels per day in July. This would take another bite out of the OPEC’s market share, with the cartel having set a self-imposed production cap. According to Reuters, shipments of oil from Saudi to Asia will be reduced by 300,000 barrels per day in July, and will also fall to Europe and US. But as long as the OPEC and Russia stick to plan then global oil inventories should fall and this will ultimately help put a floor under prices in the long-term.

In the short-term, however, the struggling prices of oil has caused the near-term trend to turn bearish on both oil contracts. Not only do we have a few lower highs and lower lows in place now, but Brent oil’s 50-day has fallen below the 200-day moving average too. This so-called “death crossover” in itself is meaningless, but it does objectively confirm that the trend is indeed no longer bullish. The last time the 50 MA fell below the 200 MA was back in mid-2014 and we all know what happened next. This time however, we probably won’t see anything like that sell-off, for the fundamental outlook is not as bearish now as it was then. Still, one cannot rule out the possibility of a deeper correction now given the ongoing negative investor sentiment and the bearish technical indications.

If Brent is going to suffer a deeper pullback, the sellers will need to help it break and hold below the $1 support range between $46 and $47. If broken successfully, Brent may then fall to low $40s next. However, the bears need to remain vigilant as oil prices are still in a consolidation profile. Indeed, a break back above some short-term resistance levels, such as $49.10, could see unwinding of bearish positions, potentially leading to sharp short-squeeze rally. Above $49.10, the next bullish objective would be $50.75, which is a previous support and resistance level. 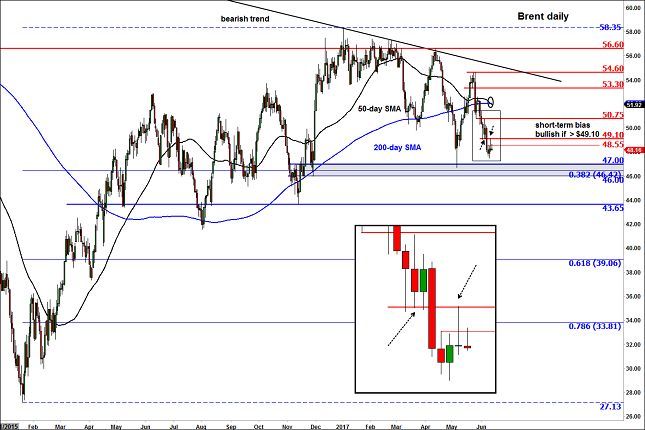