Crude’s hesitation around $50 could end soon

Oil prices were trading noticeably higher this morning. A barrel of oil cost $50.80 in London while the US contract was trading at $49.85. Brent was thus just shy of this year’s high of about $50.85 hit last week, while WTI was not too far off its own 2016 high of $50.20 achieved a couple of weeks ago. However at the time of this writing, both contracts eased off their highs as fresh remarks from Janet Yellen was met with a bit of a "risk-off" response in the markets as equities and oil both eased off their highs and the dollar turned volatile. In a nutshell, the Fed’s chairwoman kept alive the idea of a summer rate increase but her acknowledgement of the poor jobs data in May and the consequences of a Brexit on US monetary policy led to speculation that a rate increase could be delayed further out. Sure enough, US equities were quick to bounce back and the dollar gave up its initial gains made in the immediate aftermath of Yellen’s comments.

But despite the late selling, both oil contracts were still just about holding in the positive territory for the day as we went to press. Oil prices have been finding support from various sources of late. Obviously we can’t ignore the temporary influence of supply disruptions in places such as Nigeria, as well as the indirect impact of an overall weaker US dollar on the buck-denominated commodity. But these factors play second fiddle to growing expectations of a tighter oil market later this year which remains the primary driver behind oil prices at the moment. Although Baker Hughes reported the biggest rise in the US oil rig count this year, namely nine rigs, this could just be a one off or an outlier rather than the start of a new trend. But more important is how resilient crude has been to this and other oil-bearish news, such as the inaction from the OPEC last week. To us, the refusal of oil prices to go down on bad news suggests that it may be just a matter of time before WTI prices climb decisively above $50 a barrel again. That being said, we don’t expect to see oil prices rise more than $70 a barrel this year as shale producers could simply step back in and flood the market with more oil in this competitive market.

The key risk to the above bullish scenario is if US oil production stops declining now that the rig counts there have increased once again. A small and sustained rise in US oil production, if seen, could turn sentiment sour very quickly for the rest of the major oil producers are pumping oil near record levels and Iran is continuing to increase its market share. The weekly oil data from the American Petroleum Institute and the US Department of Energy will be released on Tuesday and Wednesday respectively.

From a technical perspective, WTI’s tight consolidation just below the psychologically-important $50 hurdle suggests that a breakout above this level may be imminent. The hesitation here has allowed the RSI momentum indicator to unwind from "overbought" levels of 70 mainly through time than price action, which is bullish. The RSI is also holding above its own bullish trend line, suggesting the bullish momentum remains strong. But for oil to make a decisive move higher, $50 needs to be cleared soon, otherwise a deeper correction may be required in order to encourage buying interest. Generally speaking, the outlook on WTI remains bullish for as long as it remains within the bullish channel. 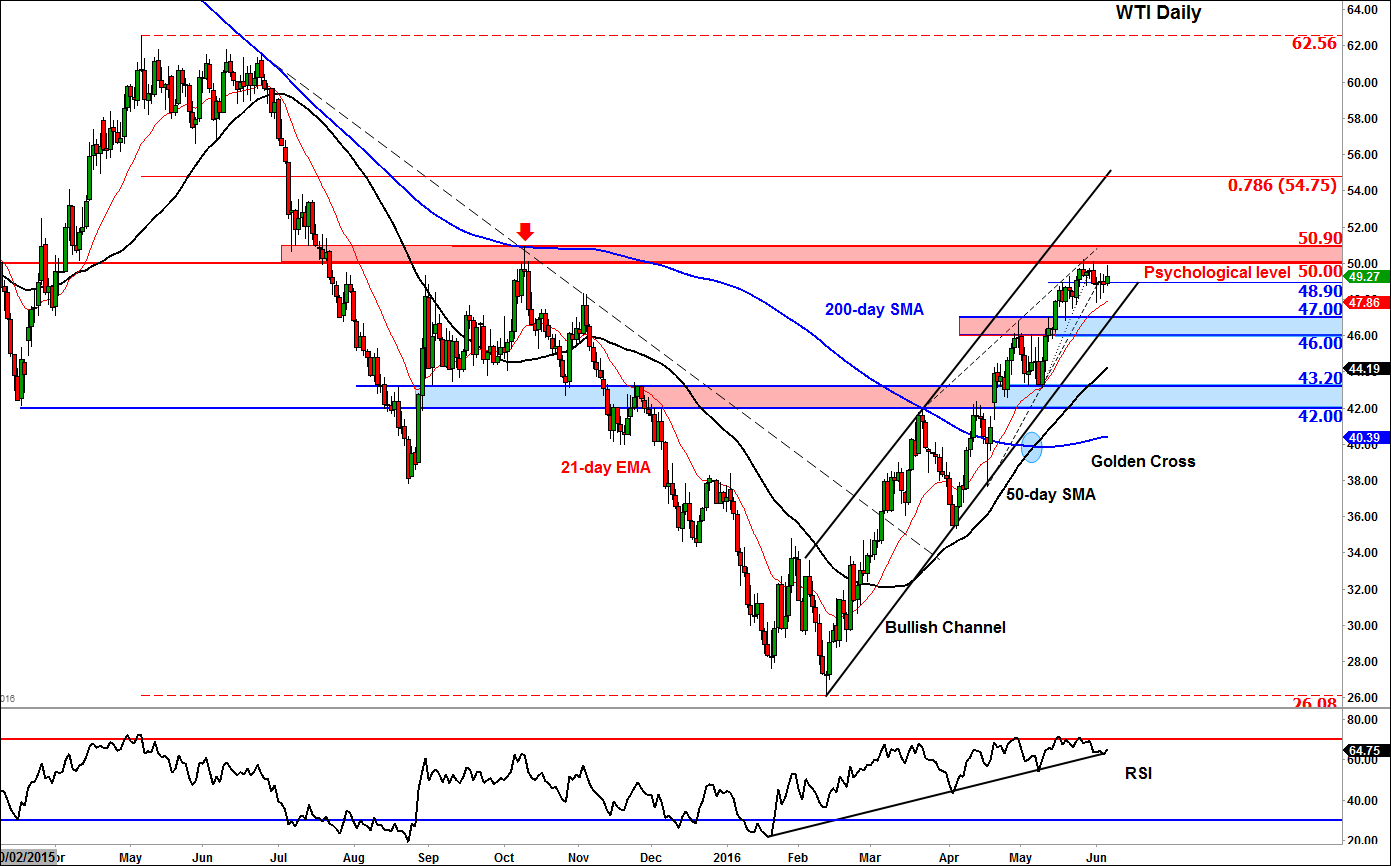