Evidently, yesterday’s upsurge was trigged by media reports that suggested Iran was willing to corporate with other large crude producers in a potential deal to curb oil output and boost prices. In a way, it was almost a repeat of what was happening earlier in the year when oil prices would jump on such headlines only for the gains to quickly evaporate on realisation that Iran was actually not going to be part of any deal. Then the buck-denominated oil prices had the additional support of a depreciating US dollar, as well as the declining US rig counts and oil production. This meant that when talks between the OPEC and Russia to freeze oil output failed, crude prices were able to rally anyway after a brief sell-off.

This time, US oil production has shown signs of stabilisation as the rig counts have actually been trending higher, while the dollar has stabilised somewhat. The market may therefore be able to call the OPEC’s bluff should we see clear signs that the talks will once again fail to materialise into any action. But will it be different this time? After all, Iran has been able to boost its crude oil production to levels that cannot be scaled up further in the near-term anyway due to infrastructure limitations and also because there is so much oil that it can sell in this saturated market. Saudi Arabia would of course be willing to freeze its oil output at these record levels. So a deal may be agreed upon this time, but there is a risk of a much stronger downward pressure on prices should they once again fail to agree on a freeze deal.

But ahead of next month’s informal OPEC meeting, oil prices are likely to find direction from the changes in general risk apatite in the markets, which appear to be bullish, as well as the weekly volatility in US oil inventories, production and rig counts – on these fronts, the news has been oil-bearish recently, though prices have nonetheless remained supported. Last night, the American Petroleum Institute (API) reported a sharp 4.5 million barrel increase in US oil inventories and a surprise build for stocks of gasoline. If these numbers are confirmed by the official Energy Information Administration (EIA) data this afternoon, then we could see some further downward pressure on oil prices later on. However, if the build turns out to be smaller or we see a surprise drawdown in oil stocks then expect to see a jump in WTI prices.

From a technical point of view, both oil contracts look poised for further potential gains in the medium term outlook. In the short-term however, there is a risk for a potential sell-off as prices have yet to break their key long-term resistance levels, with Brent repeatedly failing to climb or hold above the $50.00-50.85 area. WTI has likewise had a couple of failed attempts at trying to break its own psychological level of $50, although it didn’t quite manage to test this level in this latest rally. The key levels of support and resistance are shown on the charts in blue and red respectively. 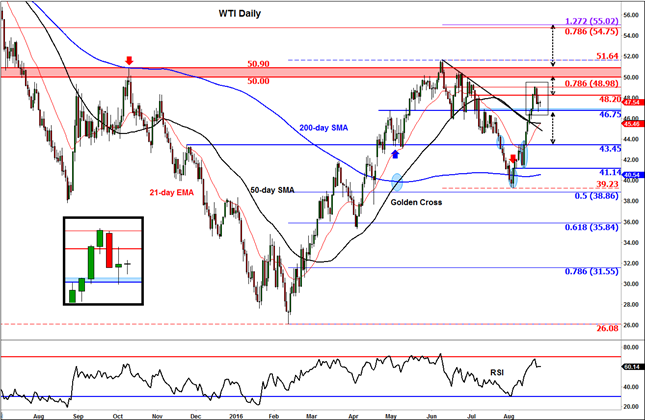 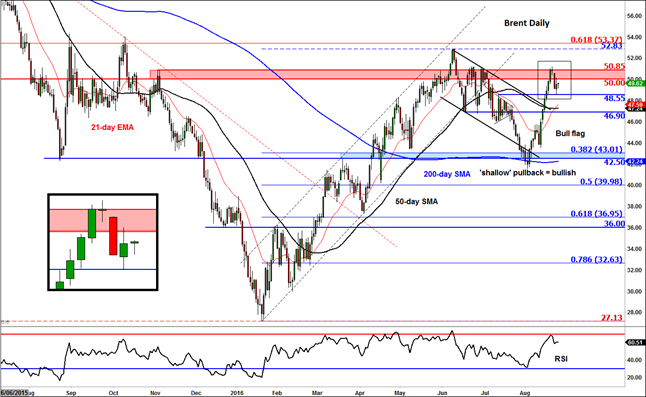