Although the Aussie has been strong, Brexit headlines should be the driving force behind this pair.

The main driver of the Pound this week will continue to be Brexit.  Officials are meeting in London to discuss a trade-deal, however as each day passes towards the end of the year, hopes fade more and more that a deal will get done.   The first positive signs in months came on Friday as the Telegraph reported that the EU is willing to “give in” on some of the UK fishing rights, however talks on governance over a deal and a level playing field have not budged.  However, latest reports are that talks over the weekend were “difficult”.   If no deal is signed, tariffs and restrictions to trade will go into effect on January 1st.

The UK has been under lockdown since November 5th; however, it will be lifted this Thursday and the country will return to a tier system to monitor the coronavirus.  The lockdown appears to have worked, as the R rate fell below 1 last week, meaning the virus spread is slowing.  Retails sales and manufacturing data have been surprisingly strong; however, we won’t see November’s Claimant Count Change until December 15th.  The BOE continues to be dovish but have lessened their stance on negative interest rates.  Chancellor of the Exchequer Rishi Sunak continues to work on an addition stimulus plan.

This week is full of data from Australia.  In addition to the RBA Interest Rate Decision, Q3 GDP will be released, with expectations of 2.5% vs -7%  in Q2.  RBA Governor Lowe will speak on Wednesday and Trade Balance and Home Sales will also be released this week.  At the RBA’s November meeting,  rates were cut from 0.25% to 0.1% and they said they would buy 100 billion Australian Dollars’ worth of government bonds of 5 to 10-year bonds over the next 6 months.  At this meeting, expectations are for unchanged, however the statement will be watched for less dovish comments as the Q3 GDP is expected bounce.  In addition, the coronavirus in Australia is under control, with many states lifting restrictions and lockdowns.  Even Victoria, the once largest hotspot in Australia for the coronavirus, has gone a month without a new case!

The Australian Dollar has been on a tear against most currencies lately, primarily driven higher by a weak US Dollar. GBP/AUD has moved lower from its highs on March 19th at 2.0852 to the lows on September 11th near 1.7493. The pair has sense bounced, however has failed to even reach the 38.2% Fibonacci retracement level at 1.8781, only bouncing to 1.8527.  The pair failed twice to trade above its June 12th highs of 1.8452.  Price also recently met a downward sloping trendline from the March highs near 1.8280. 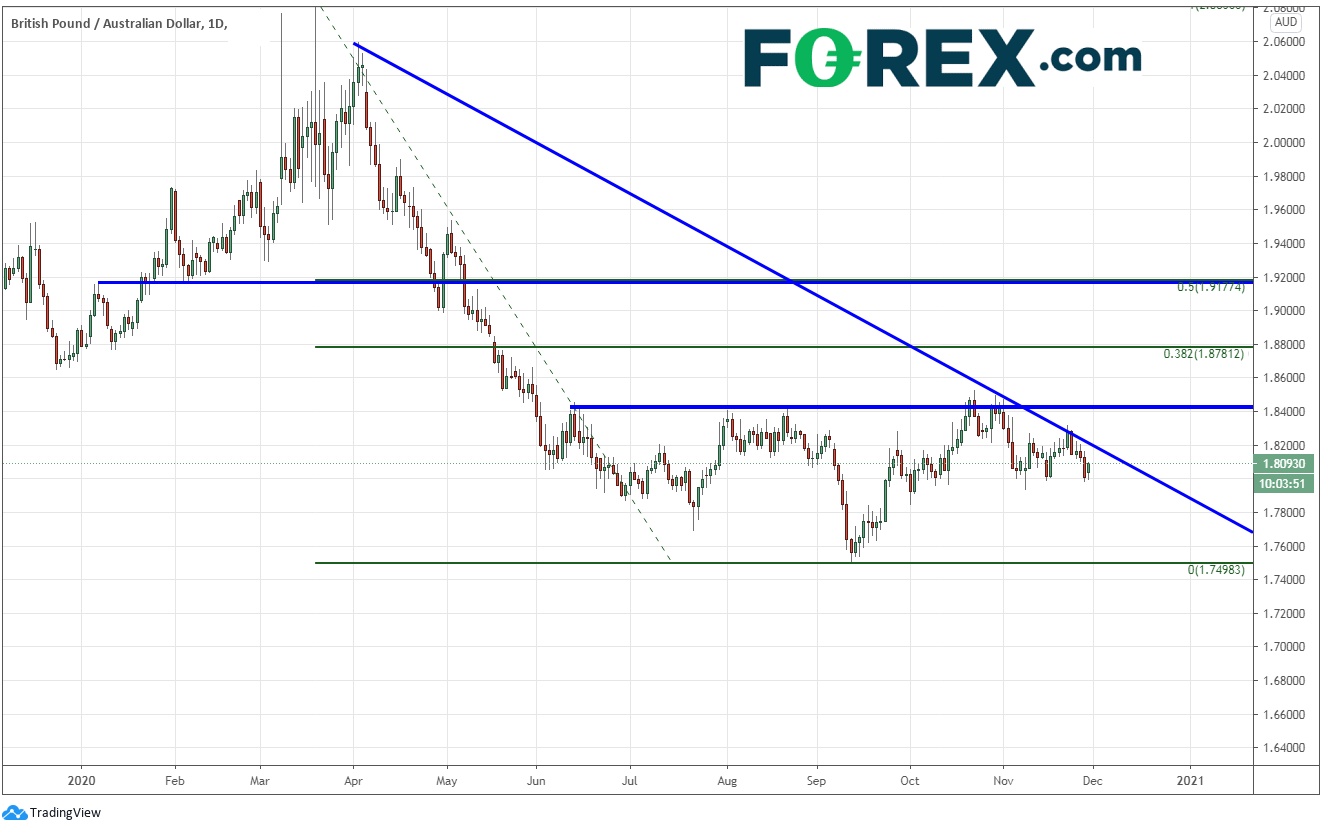 On a 240-minute timeframe, GBP/AUD has been in a symmetrical triangle since early October as price grinds towards the apex.  The pair tested the 50% retracement level from the September 11th lows to the October 22nd highs numerous times, however, it failed to close significantly below there each time.  On Friday, the pair converged with that 50% retracement level and the upward sloping trendline from the triangle and bounced, however is nearing horizontal resistance at 1.8130.  Resistance above there is the downward sloping trendline from the triangle near 1.8275. Support below remains at the 50% retracement level which continues to converge with the upward sloping trendline, as well as the psychological big round number at 1.8000.  Support below is near 1.7875. Although the Aussie has been strong as of late, Brexit headlines should be the driving force behind this pair.  Negative news will push the Pound lower while talks of a trade-deal will send it higher.