Currency Pair of the Week: USD/CAD

With this week’s economic data, including jobs data from both the US and Canada, USD/CAD has potential to be volatile.

The US released the ISM Manufacturing PMI for May earlier.  Although the headline figure was 61.2 vs 60.9 expected, the components of the print were not so great.  The Employment component was 50.9 vs 55.3 expected, meaning its difficult for employers to find workers.  In addition, customer inventories were at their lowest reading of 28 vs 28.4 in April, while order backlogs were at their highest level of 70.6 vs 68.2 in April.  So, US companies are loaded with orders (stimulus checks?), low on inventories, and they can’t get workers to manufacture the products.  This does not bode well for Friday’s Non-Farm Payroll data.  Expectations are for a headline print of 610,000 jobs to have been added to the economy in May and the unemployment is expected to have dropped slightly from 6.1% to 6%.  However, recall that for April, the headline NFP print was 266,000 vs an expectation of 978,000.  This number may be revised higher given that it was off so far from estimates.  A revision could mean a better overall NFP for May.  The jobs data will be closely watched on Friday!  Meanwhile. the Fed has held its ground: maintaining that monetary stimulus will continue until actual data confirms signs of a pickup in inflation and  in the labor.  For now, US inflation is transitory.

The Bank of Canada signaled “tapering” at the last meeting on April 21st, despite much of the country being under lockdowns/restrictions. The Canadian Dollar moved higher and hasn’t looked back since! The BOC cut bond purchases from C$4 billion per week to C$3 billion per week.  Last week, BOC Governor Macklem announced that “Tapering is the right move for the economy”.  The April Employment Change for Canada was worse than expected, just as with the US. Amid the lockdowns, Canada lost 207,100 jobs vs an expectation of -175,000.  The expectation for May (also released this Friday) is for the economy to only lose 20,000 jobs in May.  Will an increase (or less of a decrease) in jobs be enough for the BOC to continue tapering at their meeting next week, or will they hold off on further tapering until the data improves?

Last week, my colleague Matt Weller wrote a technical piece on USD/CAD, asking if the USD/CAD was putting in a bottom. The pair had been in descending wedge since the pandemic highs in 2020.  The expectation is for price to break out above the descending wedge.  However, when the BOC announced tapering on April 21st, price continued lower.  Add to that a bullish crude oil, and USD/CAD sunk to new lows.  The pair moved to the bottom, downward sloping trendline of the wedge, and although it traded below the line, could not move aggressively below it and has oscillated around it.  Near-term, price has been forming a descending triangle (green), an indication that price should move lower.  This would  target 1.1830.  However, horizontal support is at the day’s lows of 1.2006, then long-term horizontal support from April 2017 near 1.1917!  However, today’s price action formed a hammed candlestick, an indication of a possible reversal. With a diverging RSI, it is possible USD/CAD can move towards 1.2125, and above the short-term downward sloping trendline of the triangle (green).  This would open the door for a possible move up to horizontal resistance at 1.2251. 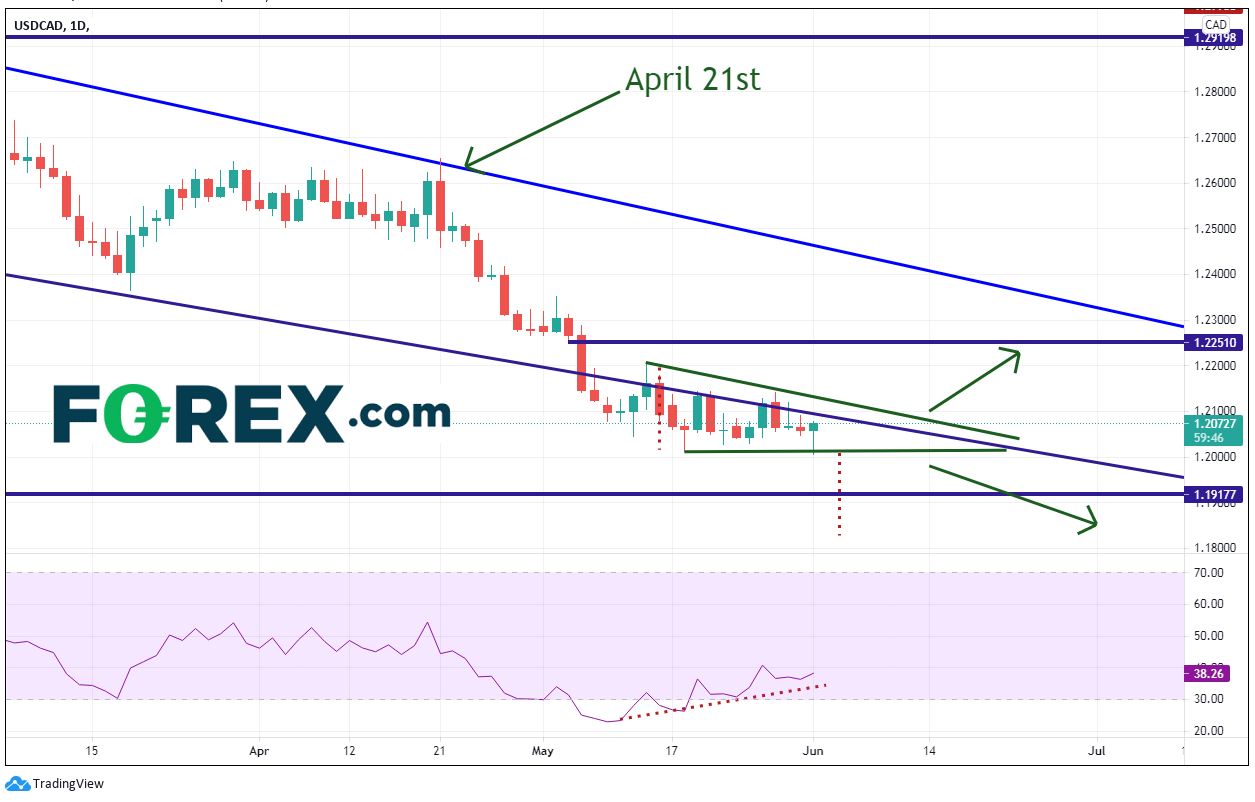 With this week’s economic data, including jobs data from both the US and Canada, USD/CAD has potential to be volatile.  Throw in volatile crude oil prices and a BOC meeting next week, and there could be good 2-way price action over the next two weeks!