Currency Pair of the Week USDNOK

With 2 central bank meetings this week, there are potential opportunities for a good deal of 2-way volatility in USD/NOK

Its FOMC time!  The biggest question traders will be looking for the FOMC to answer is: “Will the committee begin to talk about tapering?”  Inflation has been stronger than expected since the last meeting, with a headline CPI print of 5% YoY in May. At the meeting in April, Jerome Powell continued to say that the inflation is transitory, however several board members have recently indicated that it may be time to take a closer look.  In addition,  Non-Farm Payrolls for April and May were weaker than expected and there are still roughly 7.4 million people who haven’t returned to jobs since the pandemic.  With the Fed stating that they are willing to let inflation run hot as they focus on maximizing employment, was this NFP data enough for them to consider a tapering discussion? The Fed currently is buying $120 billion bonds per month under the quantitative easing program.  If the FOMC indicates that they are talking about tapering, they need to tip-toe around their language as to not cause a “taper tantrum”.  See our complete guide to the upcoming FOMC meeting HERE. The DXY went bid on Friday, presumably on position squaring and short squeezing ahead of the Fed.   Separately, it appears a bi-partisan infrastructure spending plan has been agreed to worth $1.2 trillion and does not include social programs (recall Biden was looking for a $2 trillion plan.)

The Norges Bank also meets this week to discuss interest rate policy.  They are considered to be one of the front-runners to raise interest rates the earliest.  At their previous meeting, Norway’s central bank said they will continue with the current monetary expansion however, they also noted that they will be ready to raise rates toward the latter half of 2021.  Last week, Norway released inflation data.  The headline YoY print was 2.7% vs 3.1% expected while the Core Inflation Rate was 1.5% YoY vs 2.1% expected.  Will the committee consider this a “one time” miss, or will this affect their guidance and cause the central bank to push their rate hike forecast further out?

On a daily timeframe, USD/NOK  hasn’t been much since mid-April when price fell below 8.3800.  As a crude export led country, the value of the Norwegian Krone is often been correlated with the price of Crude Oil.  However, currently, the correlation coefficient between WTI Crude Oil and USD/NOK is only -0.21,  meaning there is almost no correlation between the 2 assets.  If the Norges Bank is looking for inflation to come from crude oil, they aren’t getting it right now.  USD/NOK has been moving lower in a descending wedge formation since putting in pandemic highs in March 2020.  On May 21st, price drifted sideways outside the wedge.  Expectations are that price will retrace the wedge, however thus far, price has yet to do so. 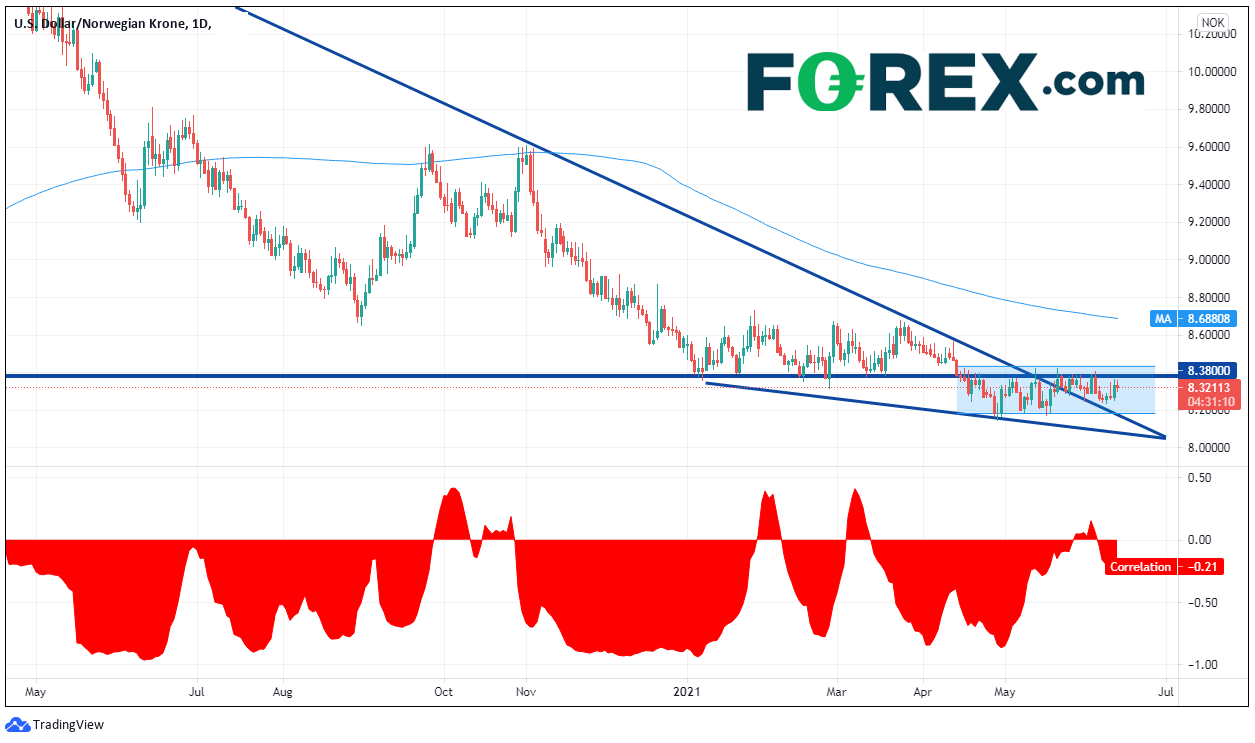 On a 240-minute timeframe, it’s easy to see that since the beginning of 2021, USD/NOK has been trading in 2 very well-defined ranges:  between 8.38 and 8.68 prior to April 19th and between 8.18 and 8.38 from April 18th until today.  The pair has tried multiple times to trade outside either end of those ranges, however, continues to fail. Will either of the central bank meetings his week be able to push USD/NOK above 8.38 or below 8.18.  Resistance is at the prior trading range highs of 8.68. The 200 Day Moving Average sits just above that at 8.6880.  If the Norges Bank remains hawkish than the FOMC, the pair can break down below 8.18, which also happens to confluence with the top downward sloping trendline of the wedge on the daily timeframe, the next support level is the bottom trendline of the wedge near 8.08. 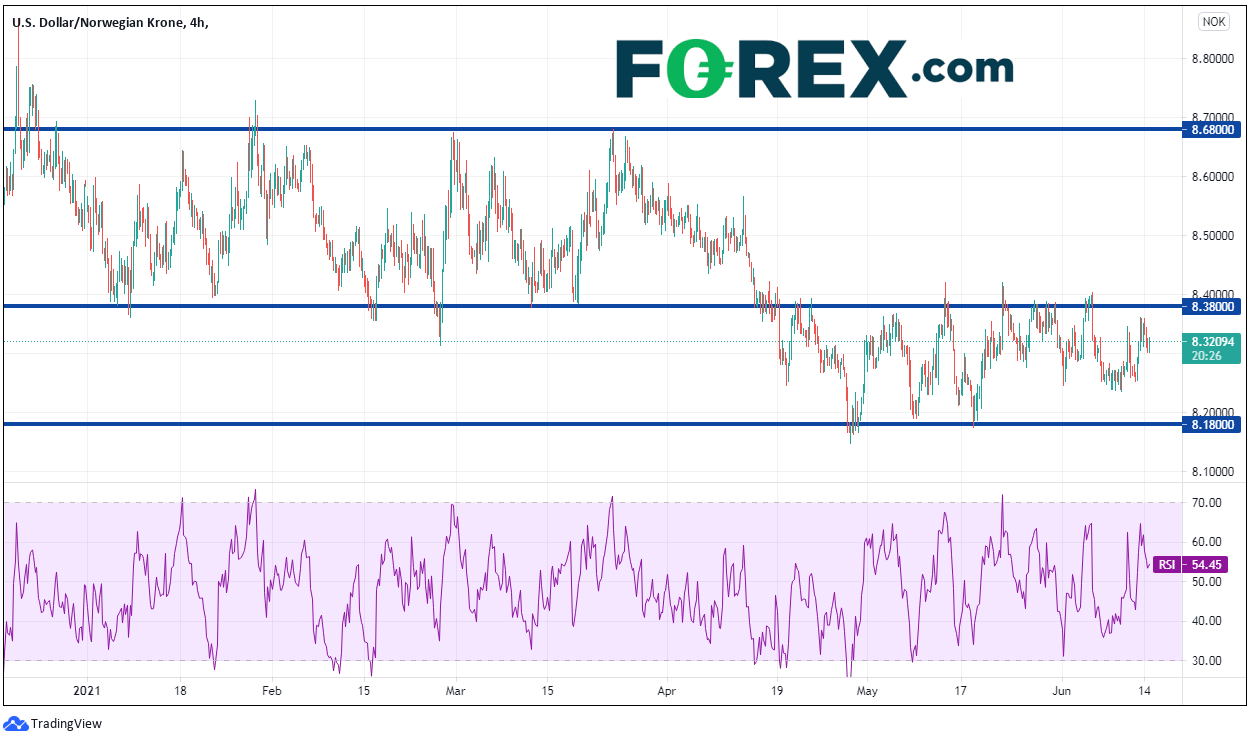 With 2 central bank meetings this week which could affect USD/NOK, there are potential opportunities for a good deal of 2-way volatility in this pair.