Sentiment has been boosted after US President Donald Trump decided to extend the deadline on deciding whether to impose tariffs on EU exports of steel and aluminum and this helped to reduce the threat of a trade war for now.

As reported earlier, it has been a good day for European stocks, most notably the German DAX index. However, shares on Wall Street have not been so buoyant despite a very good earnings season so far. Sentiment has been boosted after US President Donald Trump decided to extend the deadline on deciding whether to impose tariffs on EU exports of steel and aluminum and this helped to reduce the threat of a trade war for now.  On top of this, the sharp rally in the US dollar has weighed heavily on the EUR/USD. Today it fell further below the 1.20 handle from a high of around 1.25 a few weeks ago. Investors hope that the weaker EUR/USD exchange rate would boost Eurozone exports and lift foreign earnings when companies convert them back to euros. Whether or not the bullish trend would remain in place for European stocks remains to be seen and to a great extent it would depend on the direction of the EUR/USD. With the FOMC set to publish its latest policy statement tonight, the EUR/USD could move sharply and this may impact the European index futures.

But from a purely technical perspective, the path of least resistance remains to the upside for European indices such as the German DAX. It did take a while, but the DAX has finally cleared a major resistance area today. The break of the 12625-50 resistance range led to further follow-up technical buying this morning as a big cluster of buy stop orders that were probably resting above here was cleared. The resulting rally has filled the void that was left behind at 12780 following the breakdown in early February. The index has also now climbed above the 200-day moving average at 12665, which is a further bullish development.

Thus, the short term trend is bullish for the DAX and will remain that way so long as the index holds its own above that broken 12625-50 range, which is now the key support zone that the bulls need to defend. If they fail to do so then we would consider that as a bearish sign and a subsequent break below the last low of 12560/5 would probably signal the end of the short-term bullish bias completely. But as things stand, the DAX does look bullish and should it now form a base above that broken 12625-50 range then we could see the index climb further higher in the days to come. The next bullish objective above is at 12880ish which marks the 61.8% Fibonacci retracement against the all-time high. The subsequent bullish objective would be the point of origin of the breakdown at the start of February around the 13137-60 area. 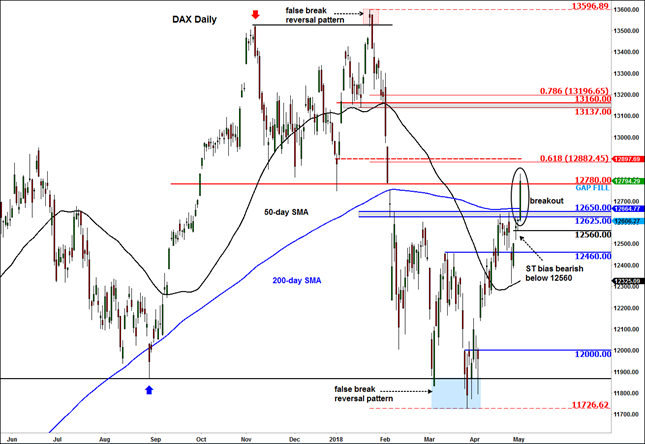