DAX: Draghi pulled the rug out from under the bulls

<p>It’s been a harrowing trip for global markets today, and ECB President Mario Draghi was the conductor.</p> <p>First traders were impressed by the size and scope of the ECB’s aggressive actions to ease monetary policy, but the market’s collective view shifted to dismay when Draghi later indicated that further rate cuts were neither anticipated nor needed. As my colleague James Chen <a href="http://www.forex.com/post?SDN=5f6893ad-2b2a-493e-a57e-bad9a0b0d7ae&Pa=20db1fa6-e674-420c-9a87-2ee29261d638">noted earlier today</a>, <i>“</i><i>While not as disappointing as December’s under-delivery of easing actions, the press conference essentially amounted to a forward-looking disappointment due to Draghi’s relatively strong comments regarding future rate cuts.”</i> </p>

It’s been a harrowing trip for global markets today, and ECB President Mario Draghi was the conductor.

First traders were impressed by the size and scope of the ECB’s aggressive actions to ease monetary policy, but the market’s collective view shifted to dismay when Draghi later indicated that further rate cuts were neither anticipated nor needed. As my colleague James Chen noted earlier today, "While not as disappointing as December’s under-delivery of easing actions, the press conference essentially amounted to a forward-looking disappointment due to Draghi’s relatively strong comments regarding future rate cuts."

This reevaluation shifted all markets immediately from a risk-on to risk-off posture, leading to a big selloff in the US dollar, commodities, and equities. As my colleague Fawad Razaqzada noted in regards to the S&P 500, "given the technical importance of [the 2010 resistance] area, a sell-off here looked almost inevitable. So, at this stage, traders need to be open minded to the fact this could just be a short-term pullback rather than the start of another major leg lower."

A similar move is playing out in European stocks, highlighted by Germany’s DAX index. While not quite as well-defined as the resistance area in the S&P 500, the DAX has reversed off a key round number / Fibonacci resistance zone of its own in the 10,000-10,060 range. Like the S&P 500, the German bourse is also forming a large Bearish Engulfing Candle* of its own, signaling a big shift toward selling pressure that could carry over into next week. Meanwhile, the daily RSI remains in negative territory (<60), signaling some medium-term skepticism toward the DAX as well.

From here, the next meaningful support level to watch is at 9,300, where the index consistently found support last year and even in January of this year. If that level gives way, a continuation down to the 18-month low near 8,700 could be next. As it currently stands, the bears will maintain the near-term upper hand as long as the DAX holds below 10,060. 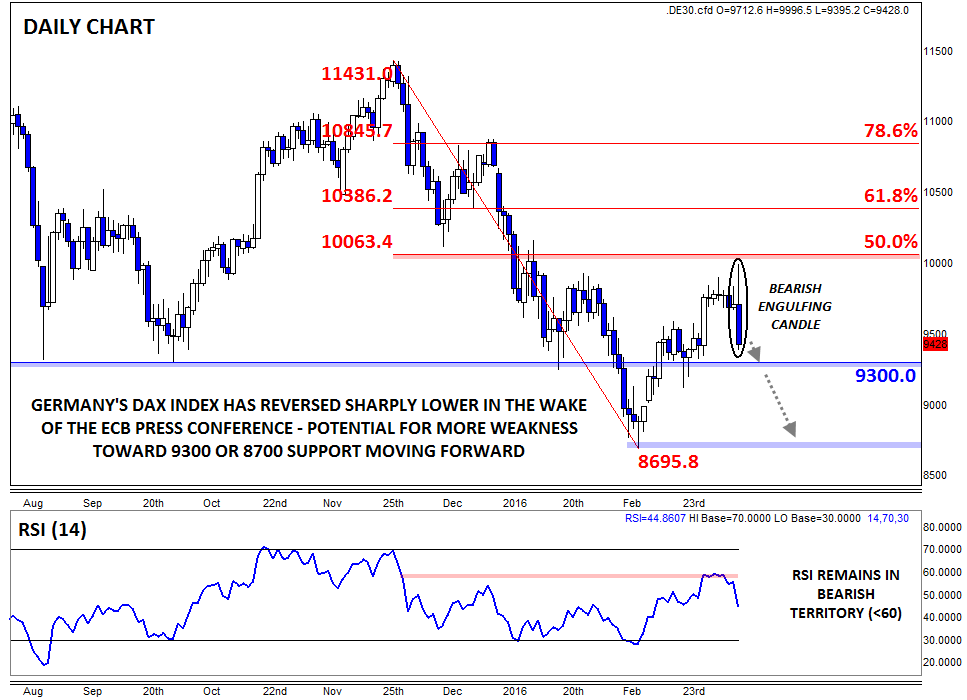