There’s significant political risks facing the Eurozone in the coming months, which may also help to keep a lid on the European stock markets.

So, the ECB delivered a policy statement and press conference that were more in less in line with expectations. Mario Draghi re-iterated that QE is likely to stay in the Eurozone at least until the end of the year, even if the ECB forecasts stronger growth and inflation rates over the next two years. But the euro rose as Mario Draghi hinted at the Q&A session that further policy action is less likely because deflation risks have receded. So, on balance, the ECB was a slightly less dovish and more hawkish than expected, as adding to policy accommodation appears less likely. If the euro has any chance of coming back, its best bet would be against a weaker rival, although even against stronger rivals the single currency was doing okay today. Meanwhile the potential strengthening of the euro and eventual withdrawal of ECB’s bond purchases means European stocks may come under pressure again. There’s also significant political risks facing the Eurozone in the coming months, which may also help to keep a lid on the European stock markets.

The Netherlands will hold its presidential election on March 15th, with populist candidate Geert Wilders running a close race with incumbent PM Mark Rutte. The Dutch election could serve as a precursor to what may happen in France where anti-EU populist candidate Marine Le Pen is also looking strong. In the event of populist victories in Europe, the future of the European Union could come under greater threat.

Thus, there is a possibility that the German DAX’s big rally could come to an abrupt halt, along with other European indices. In fact, the DAX has reached a key resistance zone in the 12015-12080 area. This area was the last support prior to the breakdown back in April 2015. It has taken the index almost two years to recover its losses from that point. Given the extent of the current rally, there is a possibility that the DAX may turn lower again from these levels, for it does look a little overbought (see the RSI). The technical short-term bias would turn bearish upon the breakdown of a key support level such as 11780. In this potential scenario, the DAX may then drop to the old resistance levels such as 11430 or even all the way to 10800 before potentially bouncing back.

Alternatively, if the above resistance area at 12015-80 fails to hold the index down for long then a revisit of the all-time high at 12390 would become highly likely. And if the index were to get to that level again in spite of everything going on in the Eurozone, then it would not come as a surprise to me to see a significant upward continuation thereafter. 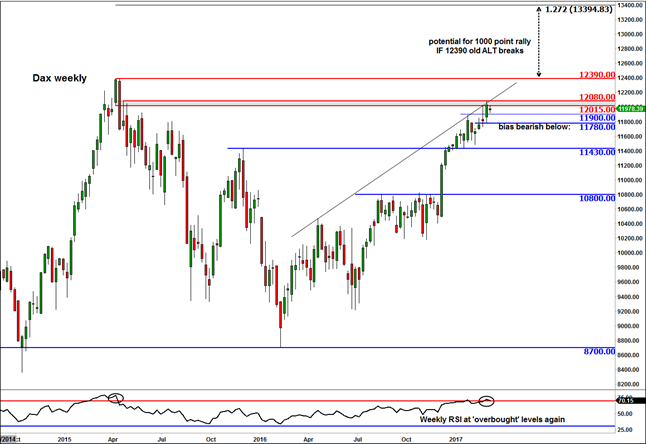