The impact of the Bank of Japan’s surprise move to cut interest rates into the negative was swift overnight as the Nikkei led a global stock market rally. This ensured that at least in Japan, stocks would close significantly off the recent lows. But this has nevertheless been the worst ever start to a year for global stocks. Money managers may therefore decide to significantly reduce their equity holdings as they rebalance their portfolios ahead of the new month. They don’t want to be stuck with equities should they fall further in February. So, the last trading day of this month may end how it began: lower. Added to this, the impact of Amazon’s big drop following its earnings release may deter US investors from buying the so-called "FANGs" group of stocks which was largely the reason why US indices did not fall significantly in 2015.

On the other hand however, the combination of the slightly stronger oil price and continued falls in government bond yields, most notably in Japan following the BOJ’s latest easing measure, means some people will undoubtedly find value in some names. Energy companies, for example, could extend their rebound next month if oil prices manage to sustain their recent gains. Crude prices have managed to recover around 25% of their losses after dropping to below $28 a barrel last week. As well as the impact of the oversold bounce, they have been supported in recent days by speculation that key oil exporters Russia and Saudi may agree to cut their output by around 5% each. Although, if agreed, this would point to a much tighter oil market, it is unlikely to have lasting impact on prices because of the fact other oil producers (e.g. Iran or the US) may simply ramp up their exports and keep the excess supply intact. Also, with Brent trading around the key $35 handle now, there is a possibility for renewed selling pressure here. If seen, stocks could also tumble.

Among the global indices, the German DAX in particular is looking rather weak. There are a number of reasons for this. For a start, the euro appears to have stopped falling with the EUR/USD exchange rate refusing to move below the 1.08 handle despite the German 2-year yields falling to fresh lows. The EUR/GBP and EUR/JPY crosses have both surged higher in recent times, too. As a result, German exports are becoming relatively expansive for customers in the US, Britain and Japan. China is another large export market for Germany, in particular for its luxury cars. With the world’s second largest economy struggling to sustain its 7% growth rate target, this does not bode well for German companies either. The European quarterly earnings season kicks into a higher gear next week and investors are understandably a bit cautious due to the slight slowdown in global economic activity and the recent emissions scandal from VW, which may have weighed on demand for German cars across the board. If the earnings fail to match or better the already-low expectations then that could be the final nail in the coffin for the DAX.

Also preventing the DAX to recover strongly is the damage that the recent sell-off has had on the long-term technical picture, which is discouraging bullish speculators from stepping back in again at this stage. Though the index bounced strongly from the previous key support area around 9300/25 (which has raised the possibility we may have seen a triple bottom reversal pattern), speculators are not rushing back into the market as the index continues to find resistance around the underside of the broken long-term bullish trend line. As can be seen from the daily chart, below, this trend line comes in around the 9830-9930 area. For as long as the bears manage to defend this level there is a possibility for another sharp move lower, possibly as early as next week. In fact, the index has not even managed to pull back to the shallow 38.2% Fibonacci retracement level (10085) of its most recent downswing, suggesting that this latest rally could be a dead-cat bounce. The lack of a more significant bounce from the key 9300/25 area is not a great sign heading into a new month. On the downside, some of the key bearish targets are shown on the chart. These include the Fibonacci levels of the most recent bounce at 9510 (61.8%), 9070 (127.2%) and 8840 (161.8%), and the 127.2% extension of the previous, much larger, upswing at 8720.

That being said, if the DAX now manages to retake the abovementioned 9830-9930 resistance area then we may see a more significant recovery soon. Until and unless that happens, the bulls should proceed with extra care. As the monthly chart shows, the long-term bullish trend line is still technically holding on this much larger time frame. Thus if the DAX manages to recover above the key 10000-10120 resistance area next month then a sharp rally could follow. Else, a revisit of the 2007 high is likely, around 8160. 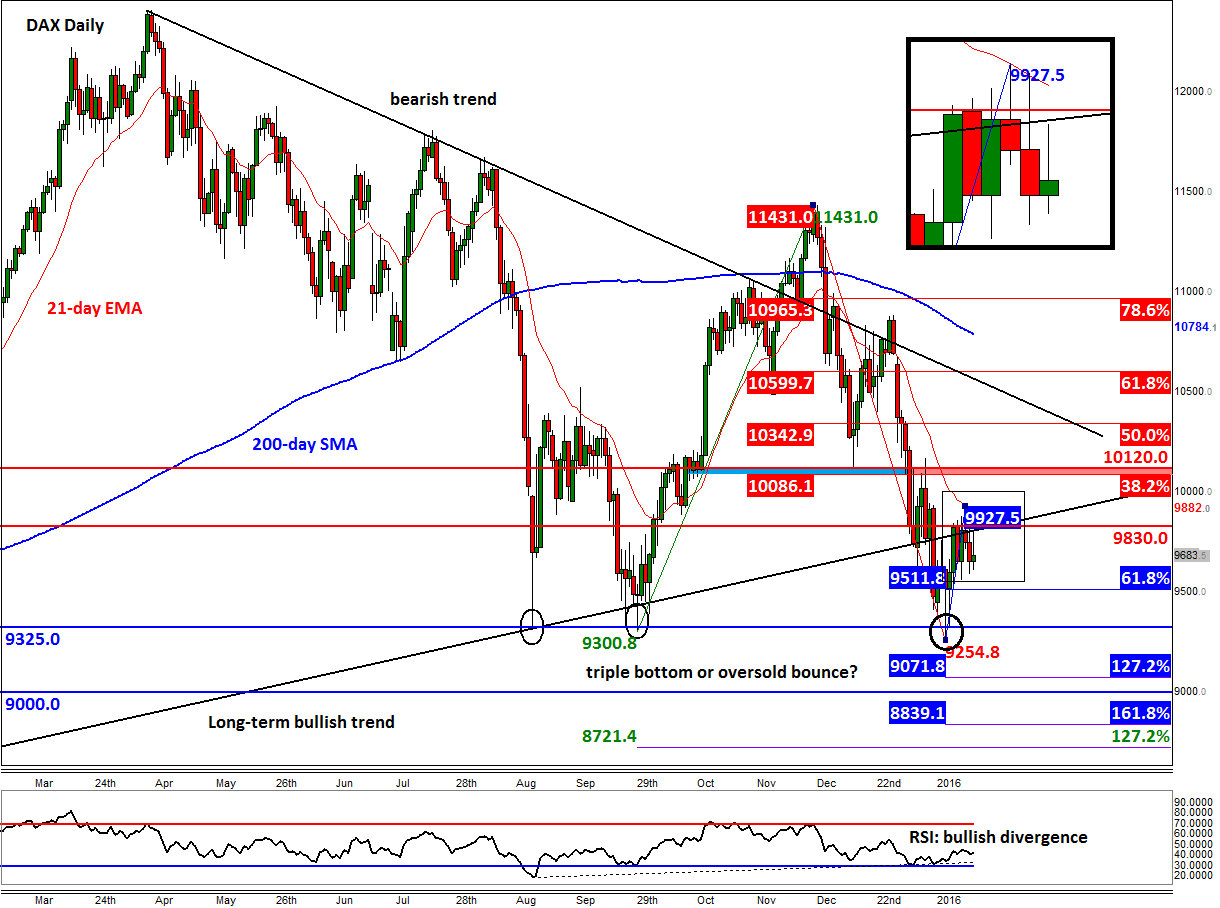 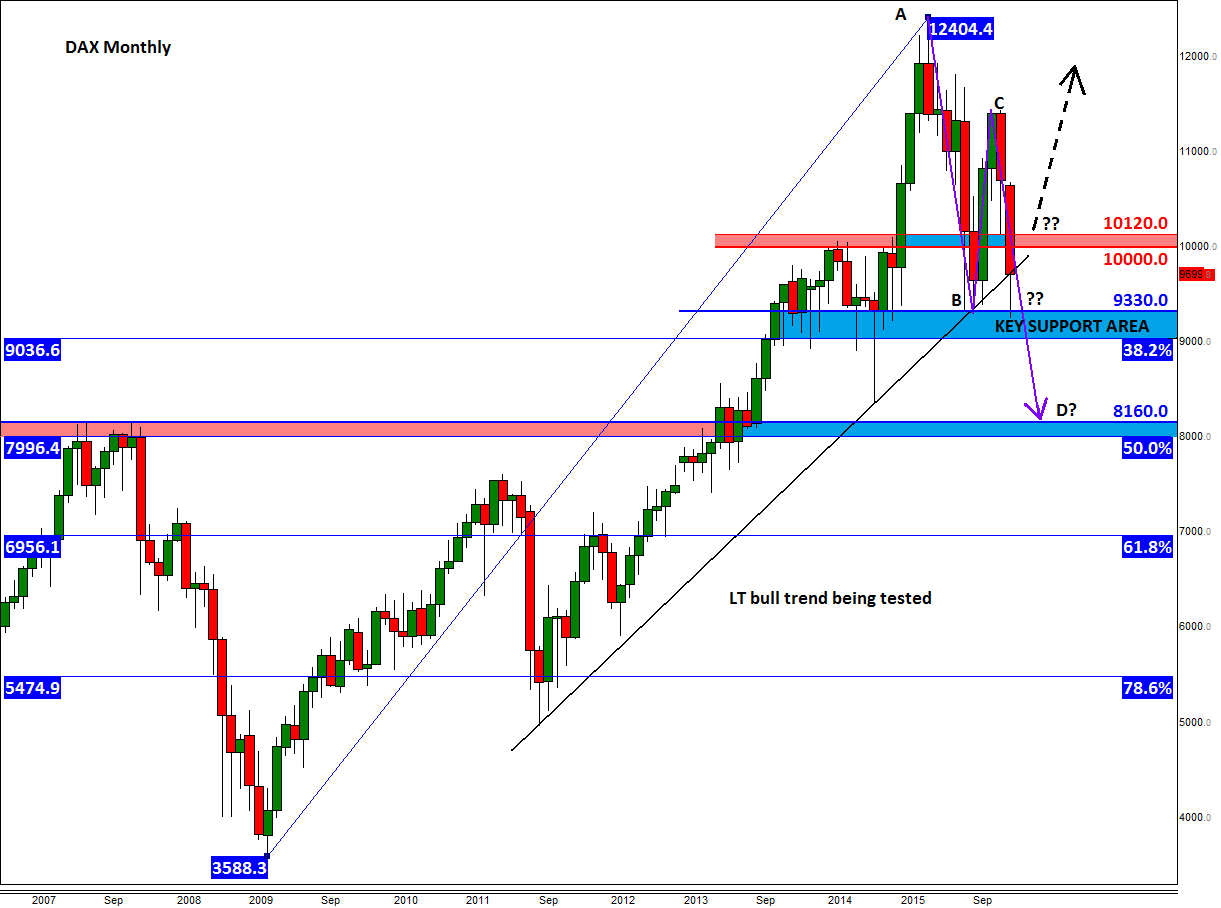