After yesterday’s sizeable drop on Wall Street, there was no immediate follow-through in the selling pressure in overnight trading.

After yesterday’s sizeable drop on Wall Street, there was no immediate follow-through in the selling pressure in overnight trading. Not only did Asian shares rise, European markets also traded in the positive territory this morning while US index futures made good a big chunk of their losses from the day before. However, the global indices were still holding below the previous day’s highs. So, the markets could still resume their downward trend once Wall Street gets underway again later. Today’s rebound could be due to short-covering and may not last long. Indeed, not a lot has changed since yesterday to trigger a rally in the markets. While the latest services PMIs from UK and Eurozone beat expectations, China’s gauge of activity in the sector dipped to the lowest level in four months: The Caixin-Markit services PMI fell 2.5 points to 51.1 in February. Meanwhile, China announced a growth target of 6.0-6.5% in 2019, lower than the previous year’s target of around 6.5%, and confirmed a series of tax cuts to boost economic growth. There was no fresh news regarding US-China trade, however. But yesterday, US President Donald Trump in his latest move to shake up the global trade, announced that goods from India and Turkey were no longer eligible for preferential, tariff-free access to the US market.

If the selling pressure were to resume, then the German DAX index needs to be watched closely, for it has underperformed her major rivals year-to-date. While the Shanghai Composite has risen about 22% since the turn of the year and the US Russell 2000 has gained 17%, the DAX has only managed to gain just over 8% during the same period. Only the UK’s FTSE 100 and Spain’s IBEX have performed slightly worse. But as things stand, we still haven’t seen a major bearish reversal pattern unfold on the DAX despite yesterday’s sharp drop. The index is currently residing within its existing bullish channel but struggling to climb and hold above the 200-day moving average. In the short-term, things would turn bearish in the event the DAX breaks its most recent low prior to the latest rally, at 11400. If this level were to break down then we will have our first lower low in place, which could pave the way for further losses in the days and weeks to come. However, if it first creates a new high for the year above the 11700 resistance level, then all bets would be off for the bears again. 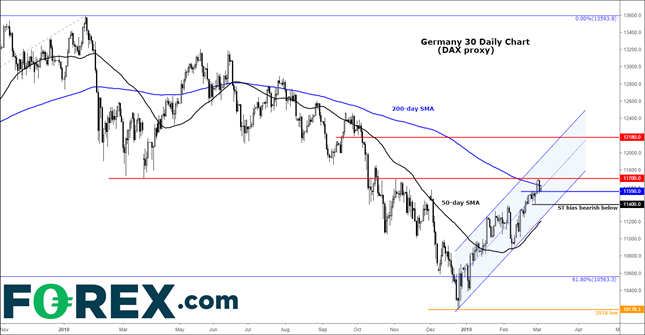