It may be a quiet day in terms of economic data, but there’s been plenty of political news in mainland Europe which has impacted both the euro and stocks.

It may be a quiet day in terms of economic data, but there’s been plenty of political news in mainland Europe which has impacted both the euro and stocks. The big news is that Angela Merkel would be running for her fourth-term as German chancellor, while in France the centre-right Republican Party is close to choosing its presidential candidate after former leader Nicolas Sarkozy was knocked out of the race. The winner – either Francois Fillon or Alain Juppe – will probably face far-right leader Marine Le Pen of Front National in next year’s presidential election. Some political analysts think that Sarkozy’s defeat will boost the Republican Party’s chances of defeating Front National. In theory, this should be good news for risk assets, although some would argue that the Brexit experience and Trump’s victory in the US suggests otherwise because in both cases stocks bounced back strongly after an initial wobble.

But what makes European equities even more appealing in my view is the slumping EUR/USD exchange rate, which continues to boost the appeal of export-oriented stocks. In particular, those that make up the German DAX index. Although today’s bounce in the EUR/USD has been attributed in the media to the above political news, I think the latter will have more of a positive influence on stocks than currencies. Indeed, this could be a dead-cat bounce for the EUR/USD. I think over the coming days the exchange rate will drift further lower towards parity as the divergence between Eurozone and US monetary policies grow. For more details on the euro, please refer to my analysis on Friday.

DAX bullish breakout above 10800 is what to watch out for

If the EUR/USD does fall further, then we may see a big breakout for the German DAX index. The latter has been stuck in a relatively tight consolidation range since early August after its impulsive move above a long-term bearish trend line was met with tenacious selling pressure around the 10800 area. The buyers didn’t completely vanish however as they defended their ground around 10200 area several times. The end result has been a steady bull-bear battle between 10200 and 10800, give or take 100 points or so. But this battle is taking place in a bullish territory and amid bullish conditions. After all, the 200-day moving average is now trending higher and the index is holding comfortably above it for the time being. This is not bearish. Neither is the fact that a few higher lows and higher highs have been formed. What’s more, the consolidation has occurred near the upper end of the longer-term range, with support coming in around the 38.2% Fibonacci level, which represents a relatively shallow retracement against the bullish trend.

Thus, the lack of a more significant downward move from around the key 10800 suggests that the buyers are happy to remain bid. Now the more times a level is tested, the more likely it will break in the direction of the test. Therefore if resistance around the 10800 area is tested again in the coming days (thanks to the slumping EUR/USD) then we may see that elusive bullish breakout after all. And given the amount of time the DAX has spent in consolidation, the breakout could be vicious due to pent up demand. So we could be talking about significantly higher levels for the DAX IF that breakout were to happen.

Now that’s all good in theory. In practice, we may see another failure at or around 10800. And who knows, it could lead to a big sell-off this time around. Even if the breakout were to come to fruition, it could still take a while. Thus, traders in the DAX may wish to remain nimble at least until such a time that a clear breakout has been witnessed. Only then can the bulls be more confident in expecting to see significantly higher levels. Because then, some of the existing sellers will have also changed their opinions. The sellers would probably grow more in confidence now if short-term support around 10600 area gives way. 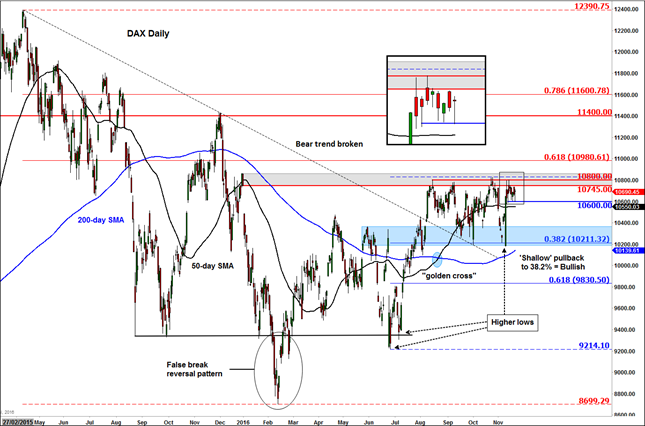