<p>European equity markets fell sharply this morning and are only modestly off their earlier lows at the time of this writing. Traders responded to yesterday’s big drop in oil prices and a retreat on Wall Street to dump European equities, which saw miners dominate the bottom of half of the FTSE 100. Banks were also lower with Deutsche off by 3.5 per cent in Frankfurt. The sell-off in banks appears to be in response to the falling yields.  Today, for example, the German 10-year Bund yields hit a new 12-month low as they hover near the all-time extreme.</p>

European equity markets fell sharply this morning and are only modestly off their earlier lows at the time of this writing. Traders responded to yesterday’s big drop in oil prices and a retreat on Wall Street to dump European equities, which saw miners dominate the bottom of half of the FTSE 100. Banks were also lower with Deutsche off by 3.5 per cent in Frankfurt. The sell-off in banks appears to be in response to the falling yields.  Today, for example, the German 10-year Bund yields hit a new 12-month low as they hover near the all-time extreme.

Yields are falling (and bond prices are rising) because of the ECB’s on-going QE stimulus programme. Previously, falling yields would have seen the stock markets rise in tandem with bond prices, and weigh on the euro. But this is no longer the case as the market is now more focused on the direction of oil prices and concerns that the record low interest rates would hurt banks’ earnings. The surprisingly positive reaction of the euro in recent months to the growing divergence of monetary policies between the EU and US suggests that the single currency may have bottomed out against the dollar. Thus some of the export names that had previously found support from a weaker euro can no longer rely on this source.

That being said, I still think oil prices are due a bounce of some sort because nothing has changed fundamentally over the recent days to justify the recent sharp sell-off. Indeed, some would argue that oil prices have already bottomed out and that the latest pullback is an opportunity to go long once the impact of profit-taking and short-term selling pressure wanes. If this view turns out to be correct, stocks should also rebound I would imagine. What’s more, the impact of falling yields may not be supporting the markets right now, but further falls to fresh record lows could see more yield-seeking investors park their funds into risker assets such as equities and away from safe haven government bonds.

The recent sell-off has left a couple of big gaps in some of the major indices, such as today’s featured chart: the German DAX, below. Usually, but not always, gaps get "filled" before the markets make their next move. This implies that the DAX could bounce back. Indeed, the technical outlook is still slightly positive on the DAX after it climbed back above the pivotal 9300/9340 area in February, which basically violated the trend of lower lows and lower highs. Although the 200-day moving average is still significantly above price and pointing lower, the faster moving 50-day average has turned flat recently and is being tested as support today. Significantly, the 50-day SMA is also roughly where the 38.2% Fibonacci retracement level, at 9570, comes into play. This makes it a potentially strong support area. So, I wouldn’t be surprised if the DAX bounces back from here as early as later this afternoon.

Of course, the more significant reference point is the broken 9300/9340 area, but ideally the bulls would like to see the index turn around and rally without testing this region; if seen, this would strongly suggest the selling pressure is weak. But if the selling pressure continues relentlessly then the next stop could well be at around the 9300/9340 support area before the index makes it next move. 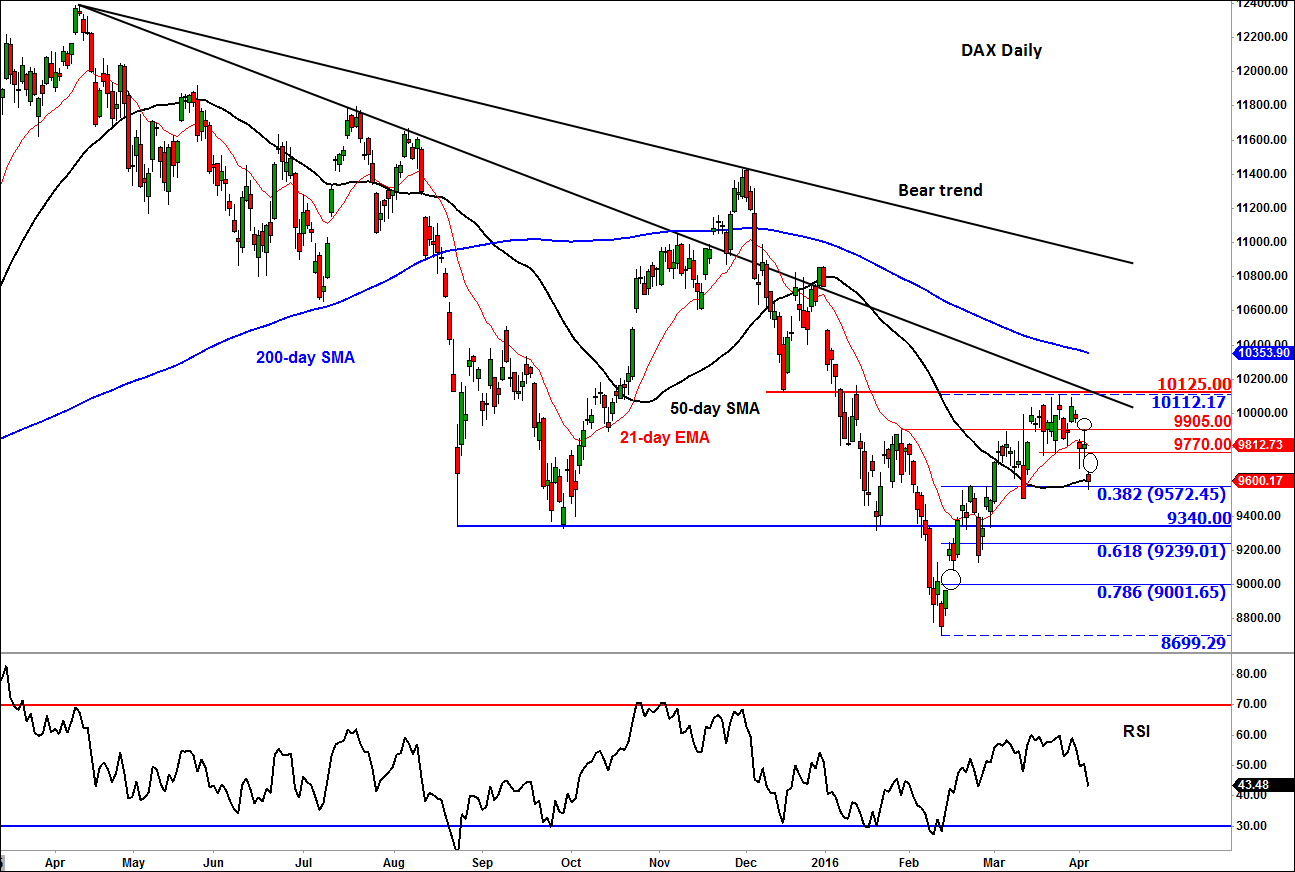