European stocks turned mixed after a positive start, following a positive session in Asia where sentiment was boosted on prospects for China’s economic reopening.

In Europe, we saw Eurozone CPI inflation come in a touch softer but remained in double digits on the headline front. However, core CPI was unchanged at a record high of 5% year-over-year, suggesting that higher prices are being embedded in other areas of the economy. Investors were awaiting a speech by Fed Chair Jerome Powell for signals about the path of interest-rate hikes, and some important US macro-economic data.

The slightly softer Eurozone inflation data gives hope that the ECB is starting to see the light at the end of the tunnel in its fight against inflation. CPI slowed for the first time in more than a year. But at 10%, CPI remains far too high above ECB’s target and projections. Base effects will come into the equation, meaning CPI will likely start falling more in coming months – unless there’s more energy shock. But core CPI is proving to be stickier than expected. So, the ECB is unlikely to take its foot of the gas just yet. I have doubts as to whether they will move down a gear to 50 basis point rate hike in December. Don’t forget that it hasn’t started active quantitative tightening yet. This is likely to start at some point in 2023, potentially providing fresh downward pressure on EU stocks.

But that’s a worry for another day. Investors are looking forward to Powell’s comments on the economy and the labour market later this evening. The Fed has signalled rate hikes will step down to 50 basis points from December. Powell is likely to confirm this. But if he also signals that there will be a higher terminal rate then that could hurt sentiment.

Attention will also turn to the US economy in the second half of the day, with the publication of ADP payrolls report, GDP, JOLTS Job Openings and Pending Home Sales all to look forward to.

Ahead of all of that, the DAX has struggled to move in either direction as it continues to stick around key resistance between 14450 to 14576, with the latter marking the 61.8% Fibonacci retracement level against this year’s high. Conservative bears will need to see evidence of strong selling here and a break of the recent low at 14123, before the potentially stepping in. 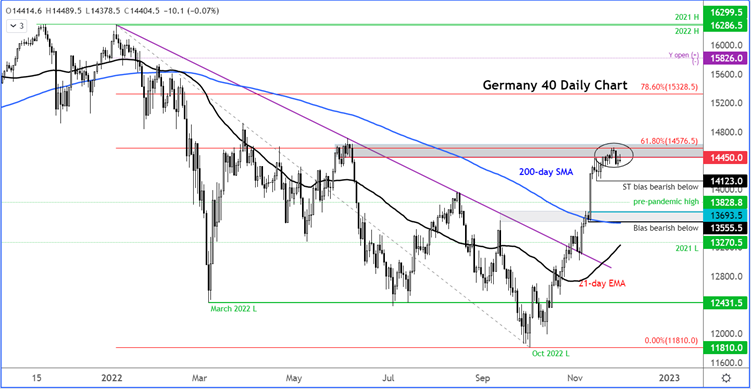