Out of the major US indices, the Dow Jones Industrial Average has struggled the most in recent times.

Out of the major US indices, the Dow Jones Industrial Average has struggled the most in recent times. Unlike the S&P 500, the Dow is not weighted by market capitalization. This makes it vulnerable as any of its 30 components can have a big impact on the index, which is why – despite its popularity – it is not considered to be a good representation of the US stock market. Undoubtedly, the struggles at Boeing have been one of the main reasons explaining the Dow’s poor performance of late. But we have also had disappointing earnings and/or outlook guidance from some of its other components such as Caterpillar, Texas Instruments and McDonalds:

Lots of earnings still to come

It is going to be a very busy period for earnings, with 62% of the S&P 500 companies reporting their results this and next week. So, we could have a much better understanding of valuations by next Friday. The stock markets may well have moved sharply by then. Judging by the above earnings, it doesn’t look like this earnings season is going to be pretty. Indeed, tech giants face shrinking growth, according to my stock market expert colleague Ken Odeluga – HERE is why. So, there is a good chance we could see a correction in the markets despite Trump’s ongoing “making good progress” jawboning in relation to US-China trade talks.

DJIA clinging onto key support but pressure is growing 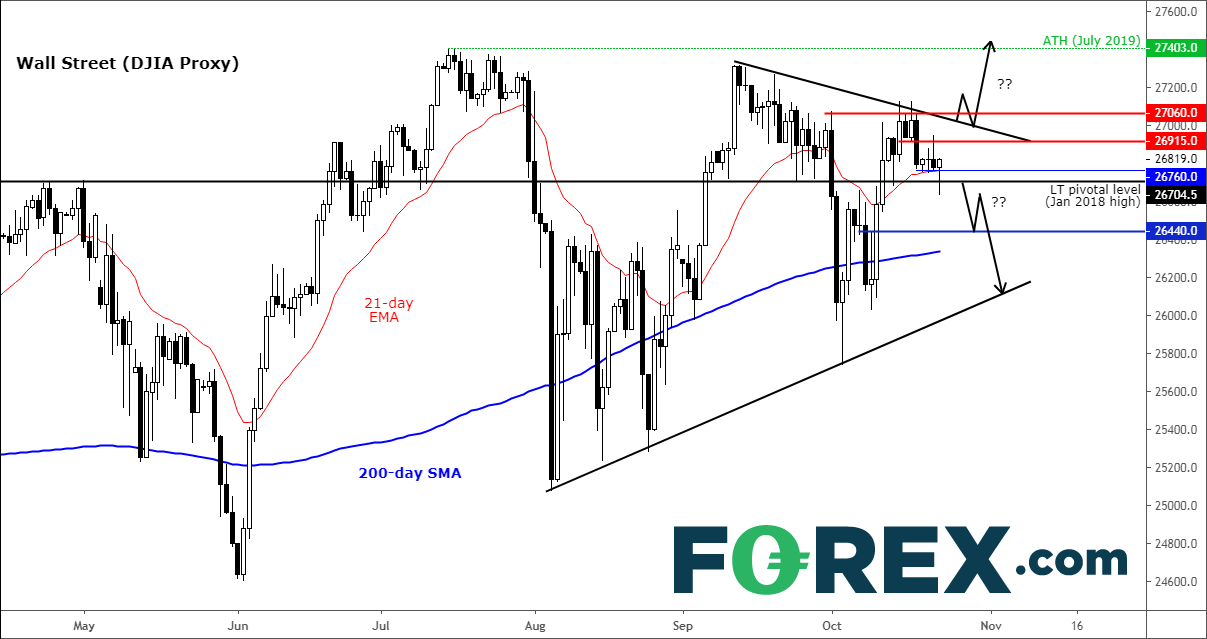 Looking at the Dow from a technical standpoint, the Dow is not exactly breaking down but it isn’t surging higher either. In other words, it is consolidating. The Dow is clinging onto its 21-day exponential, although it is still somewhat comfortably above the 200-day simple moving average. The indexes is also holding inside converging trend lines, compressing it ahead of a potential break out or break down soon.

Within this consolidation, there is a pivotal level around 26705, which was the high from January 2018, above which the index has struggled to hold on a number of occasions now. Every time it has closed back below this level, it has gone on to fall sharply, with the exception of one or two cases.

So one of the two scenarios we are on the lookout for is a similar pattern to unfold here: a closing break below 26705, which could lead to a sharp move lower.  Alternatively, a clean break out from the consolidation could lead to a rally towards and possibly beyond the previous all-time high of 27403 hit in July.

Out of the two scenarios, I am leaning more towards the bearish side given the recent soft earnings, but need that confirmation (a closing break sub 26705) to become more convinced.
TAGS:
Indices Wall Street
Share: