The dollar continued its recent downside momentum on Thursday as Federal Reserve Chair Janet Yellen closed out a second day of testimony to the US Congress, casting an ominous shadow over the prospect of further interest rate hikes. Indeed, investors have even begun to speculate on potential interest rate cuts going forward, while Yellen specifically refrained from ruling out negative rates in her Senate testimony on Thursday.

The dramatic reversal recently in US monetary policy speculation has weighed heavily on the previously strengthening dollar. This pressure can readily be seen in the USD/JPY currency pair. Of course, the precipitous plunge for USD/JPY within the past two weeks may be attributed not only to a falling dollar due to an increasingly dovish Fed stance, but also to the equally sharp surge for the yen resulting from safe haven asset flows back to the Japanese currency.

The combination of a plunging dollar and surging yen has resulted in the USD/JPY currency pair tumbling by more than 8% in the first two weeks of February alone. This sharp slide follows immediately after, and dramatically reverses, the late-January USD/JPY rise that occurred when the yen weakened after the Bank of Japan’s surprise move towards negative interest rates.

Pressure on the dollar due to radically diminished expectations of future Fed monetary tightening is not likely to abate in the very near future. Likewise, heightened fear and volatility in the struggling global equity markets appear likely to remain for the time being, which should further prop up the Japanese yen.

For USD/JPY, this means that the recent plunge could potentially be extended significantly. Since the beginning of February, the currency pair has fallen sharply below several major support levels within a matter of just days, including 118.00, 116.00, and most recently, the 114.00 level. Having just reached down to touch a new 15-month low slightly below 111.00 as of Thursday, USD/JPY has accelerated its bearish momentum and could now be poised to target further downside objectives at the key 110.00 and 108.00 support levels. 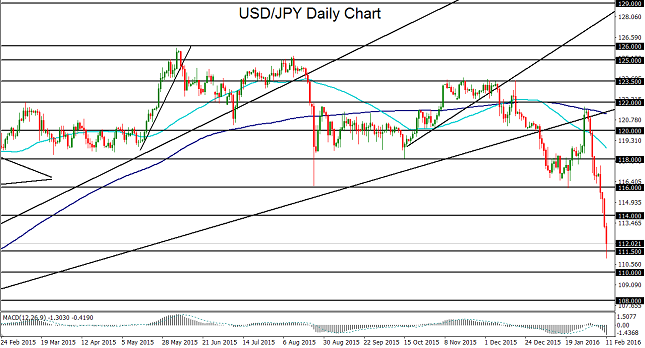