With the GBP/USD breaking down and the EUR/USD starting to accelerate lower, the CHF/USD could be the next domino to fall among the major European currencies.

It has been a rather good week for the US dollar, supported mainly by outflows in foreign currencies. In Europe, for example, raised Brexit uncertainty has undermined the pound and the latest news here is that cross-party talks have collapsed, according to Labour's Jeremy Corbyn. The euro, meanwhile, has come under pressure after Italy’s Deputy Prime Minister Matteo Salvini said his country should be ready to break the EU’s deficit ceiling of 3% of GDP and push debt to 140% of GDP if necessary, in order to lower the unemployment rate. Meanwhile emerging market currencies have suffered their worst week since the Turkish lira crisis last summer, with China’s renminbi taking it on the chin amid escalated trade tensions between the world’s two largest economies. The greenback has also shrugged off this week’s mixed data, with retail sales and industrial production data disappointing while a couple of housing market numbers and the Philly Fed manufacturing index beating expectations.

CHF next domino to fall among ailing European currencies?

With the GBP/USD breaking down and the EUR/USD starting to accelerate lower, the CHF/USD could be the next domino to fall among the major European currencies. That’s to say, the USD/CHF could be about to stage rally, as the Dollar Index closes in on its earlier 2019 high. The only caveat is that the Swissy is a safe haven currency, so should geopolitical risks increase further then we may not see much bullish momentum in the USD/CHF.

Regardless, from a purely technical point of view, the fact that the USD/CHF is poking its head above short-term resistance at 1.0100 today is potentially a sign of things to come with the bears losing some control. Also, with equities markets rallying sharply the past couple of days, the risks are skewered to the upside for this currency pair. The key level to watch above here is at 1.0125 – a break above here could see the USD/CHF push towards this year’s high at just under 1.0240 next. Meanwhile if the break above the 1.0100 handle proves to be a false move and price closes back below this hurdle, then in this case, a potential drop below 1.0050 support could be next, with the 200-day average at just below parity being the main bearish objective. 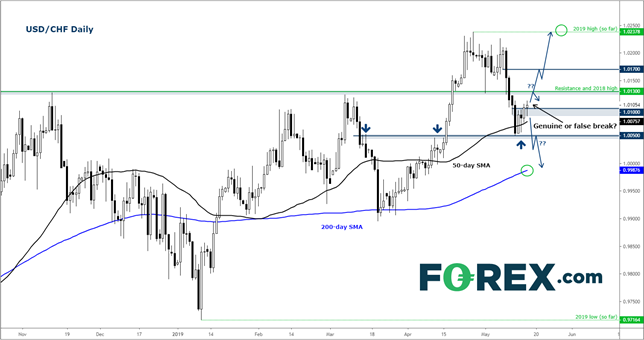