Dollar falters but strength remains ahead of jam-packed week

Share:
The US dollar has taken a bit of a breather this week as it consolidates its recent gains ahead of major economic data and events in coming days. For around a month, the greenback has been on an exceptionally sharp incline as expectations for a Federal Reserve rate hike this year have progressively increased. A mid-December rate hike continues to be seen as the most likely scenario. But before that may or may not happen, there are plenty of data releases and events that could have a heavy impact on that scenario, and on the direction of the US dollar.

The rest of this week brings two key data releases: Durable Goods Orders (including the core data that excludes transportation) and Advance GDP. Both of these readings could have an effect on the Fed’s eventual direction, especially in the event of any major deviations from expectations. But perhaps much more important for Fed-watchers and dollar-traders will be the slew of events scheduled for next week. Besides key policy decisions from major central banks – including the Reserve Bank of Australia, the Bank of Japan, and the Bank of England – the November Fed decision occurs next Wednesday. The Fed statement should provide some further clues as to the likelihood of a December rate hike (if, as expected, rates are indeed kept unchanged on Wednesday).

Aside from the Fed meeting, October’s non-farm payrolls employment data will be released next Friday – this heavily anticipated jobs report will play a major role in the Fed’s policy direction in December. Besides this, also in store for next week are both the ISM manufacturing and non-manufacturing PMI reports, which are vital barometers of the US economy for the Fed.

Amid this bombardment of data releases and Fed activity, the US dollar is likely to see some volatile moves, especially surrounding the mid-week Fed statement. As noted, the dollar has been in fluctuation ahead of these events, although it has maintained its overall strength as expectations of higher US interest rates have provided strong support. In the case of USD/CHF, an upside breakout above a long-term downtrend channel last week resulted in the currency pair rising to less than three pips short of parity (1.0000) before pulling back. With any further dollar strength next week in the event of positive economic data or a more hawkish-leaning Fed, a USD/CHF breakout above parity could open the way towards major upside targets at the 1.0100 and 1.0250 resistance levels. 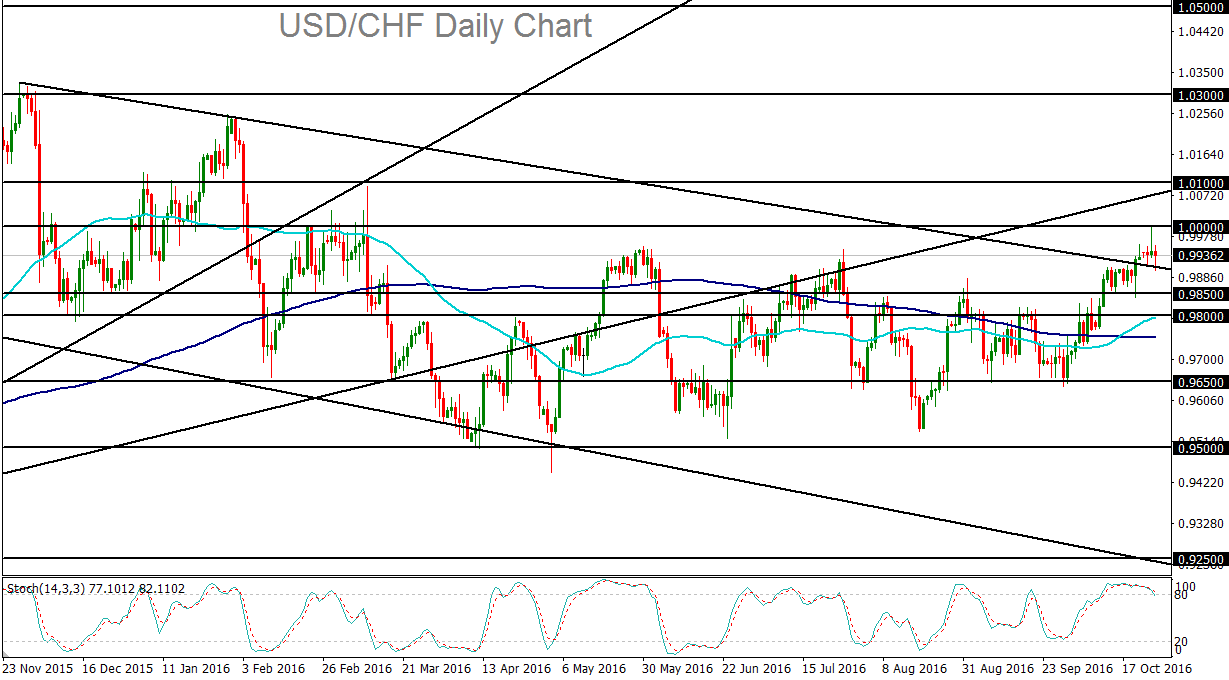