Dollar Index defends 100 as focus turns to US GDP

It has been a rather quiet day so far in the markets. Traders have been sitting on their hands after the recent volatility, as they probably await the release of US GDP at 13:30 GMT. The world’s largest economy is expected to have grown by 2.1% on an annualized basis in the fourth quarter of last year. If correct, growth would be down sharply from 3.5% recorded in Q3

It has been a rather quiet day so far in the markets. Traders have been sitting on their hands after the recent volatility, as they probably await the release of US GDP at 13:30 GMT. The world’s largest economy is expected to have grown by 2.1% on an annualized basis in the fourth quarter of last year. If correct, growth would be down sharply from 3.5% recorded in Q3. Given the subdued expectations, a positive surprise here could see the dollar surge higher. But a small negative surprise of below 2.1% may not cause the dollar to weaken noticeably, unless the data comes in really weak. This is because Donald Trump’s ambitious fiscal plans point to stronger growth in the coming quarters, and traders may not pay much attention to what had happened in the past.

So whichever way you look at it, there is an increased likelihood that the dollar may end the day higher than lower. In fact the Dollar Index has already formed a reversal-looking price pattern on its chart on Thursday, which points to further strength for the greenback. Thursday’s bullish engulfing candlestick formation clearly highlights a change in the direction from selling to buying pressure. The shape of the candlestick is important but it wouldn’t mean much if it was formed at a random price location. But as can be seen from the chart, this bullish pattern was formed around the 100 handle. This psychologically-import level had been strong resistance in the past, and after the breakout in November, it has held as support on a daily closing basis on several occasions now. Put another way, the sellers have had difficulty to push the dollar below this level, suggesting that the bullish trend is still just about holding firm for the dollar. This view would change should 100 break on a daily closing basis. Until and unless that happens, one can only assume that the most likely outcome is for the dollar rally to resume. A few levels of support (blue) and resistance (red) are shown on the chart. 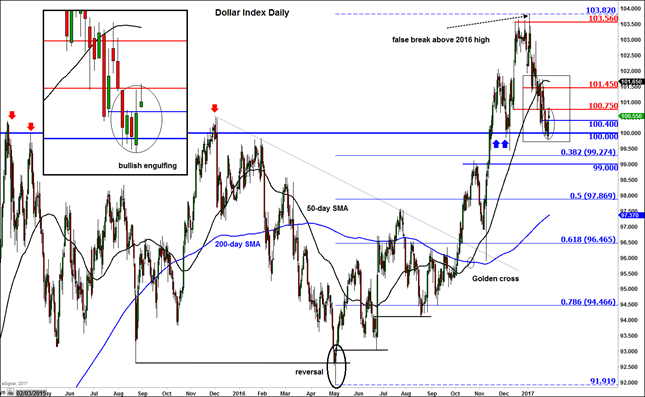