Dollar Index Holding Above Key Area in the Mid-95.00s

After last week’s aggressive schedule of Fed speakers and the start-of-the-month data dump, this week’s trade is notably quieter on the data front, even when US banker return from today’s Columbus/Indigenous Peoples Day break. Indeed, the monthly inflation reports (PPI on Wednesday and CPI on Thursday) are the only US economic reports of note, and with the Federal Reserve seemingly set on raising interest rates in December, the market impact of those readings may be relatively limited as well. As a result, we expect technical developments to dominate this week.

Looking at the chart, the US Dollar Index broke back above a key previous resistance area last week around 95.60. This area capped rallies in June, July, August and September (though the index did briefly break above it in August. With the index now on track to close back above for a third straight day, bulls may start to turn their eyes upward for a potential retest of the 15-month high near 97.00.

From a longer-term perspective, it’s also worth noting that the Dollar Index is showing bullish momentum and has, thus far, only seen about a 38.2% Fibonacci retracement off the summer rally. Prices recently broke out of a falling wedge pattern, which despite its bearish-sounding name, presages a continuation higher more often than not. As long as the Dollar Index holds above 95.50 on a closing basis, bulls will maintain the upper hand. 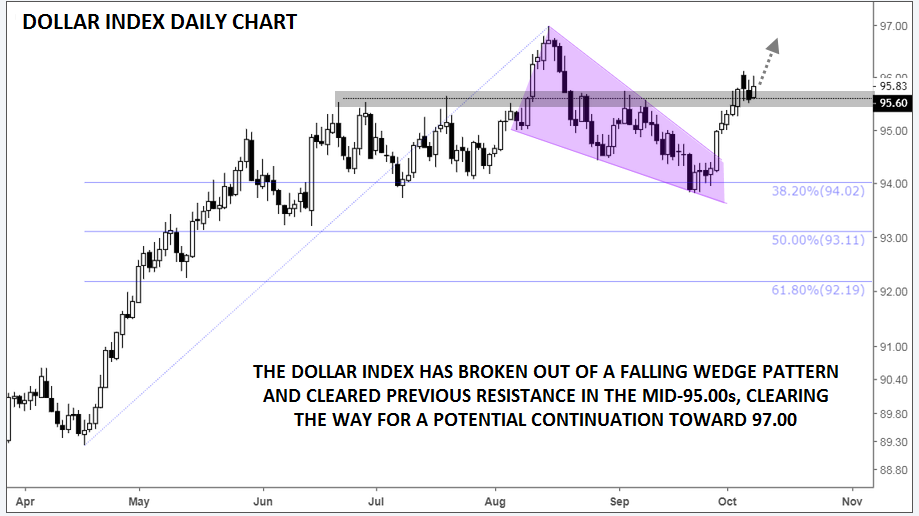