Dollar rises to test key levels ahead of US CPI

Today saw the benchmark 10-year US Treasury yield climb above 2.9% for the first time since early 2014.

Today saw the benchmark 10-year US Treasury yield climb above 2.9% for the first time since early 2014. Yet, unlike last week, stocks didn’t respond in a negative way, as the short covering continued after Friday’s turnaround. The dollar was mixed, trading higher against most currencies. Investors have warmed up to the idea that interest rates may have to go up quicker as the Fed attempts to control inflation following the publications of mostly stronger macroeconomic data from the world’s largest economy. The dollar could make a more significant comeback in the event the latest US inflation and retail sales figures, both due for release on Wednesday, come out ahead of expectations. But will that be enough to turn the dollar’s fortunes around? While the greenback may have risen for the past two weeks, this comes on the back of a sustained drop since the start of last year. For the dollar to turn bullish, we will need to see a few things unfold now. First and foremost, the Dollar Index (DXY) will need to go back above the lows of the previous two years, at 91.00 (2017) and 91.92 (2016). Should this happen then there is a good chance the DXY would go on to break above its established bearish trend line that has been in place since the start of 2017. The trend line comes in around this year’s opening price level of 92.28, making it even more important. Meanwhile the next short-term support levels come in at 90.00 and at 89.40. The long-term support level of 88.50 has held after a couple of tests. 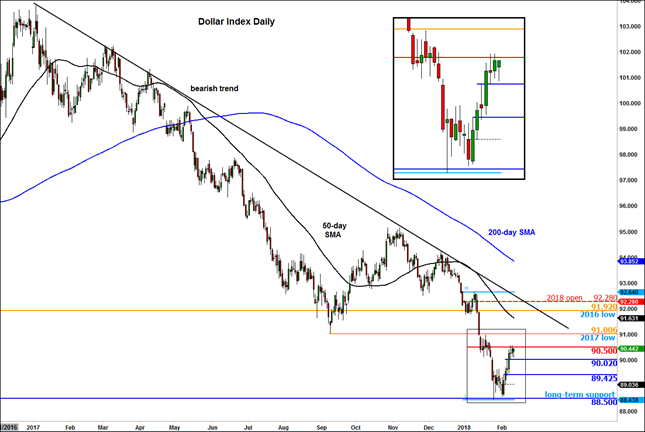