Dollar shines in an eventful week in US politics

Contrary to most analyst predictions, including ourselves, the US dollar looks set to close the week higher after an eventful week in US politics. Meanwhile, the Australian dollar fell even though base metals rallied, most notably copper which is having its best week since 1979 with a near 20% surge. This is quite bizarre in my view, given the still-high demand risks in China, which is the world’s largest consumer of copper. So either the Aussie is up to something or Dr Copper...

Contrary to most analyst predictions, including ourselves, the US dollar looks set to close the week higher after an eventful week in US politics. The greenback has surged higher against most currencies except the British pound, which has been supported by the Bank of England dropping its dovish bias amid concerns about overcooking inflation in the UK. In contrast, the euro, yen, Swiss franc and all the commodity majors have slumped versus the dollar. The Canadian dollar has resumed its downward trend amid slumping oil prices, weak domestic data and on the back of a dovish Bank of Canada. Elsewhere, the Reserve Bank of New Zealand cut interest rates in mid-week and warned of more easing steps due mainly to a strong currency and the kiwi has correspondingly sold off.

AUD/USD down despite copper rally

Meanwhile, the Australian dollar fell even though base metals rallied, most notably copper which is having its best week since 1979 with a near 20% surge. This is quite bizarre in my view, given the still-high demand risks in China, which is the world’s largest consumer of copper. So either the Aussie is up to something or Dr Copper: the divergence cannot go on forever in my view. Next week in Australia, there will be some important domestic data to look forward to, which includes the RBA’s policy meeting minutes on Tuesday and the all-important Aussie employment numbers on Thursday. These have the potential to move the Aussie out of its laborious consolidation range.

AUD/USD on the verge of a collapse?

The Aussie is actually on the verge of a collapse, at least that is what the charts indicate. As can be seen below, the AUD/USD is testing its 11-month old bullish trend line and key support in the 0.75555/70 area following yet another failed attempt to breakout above key resistance in the 0.7720 area this week. The Aussie could fall sharply now if support at 0.7555/70 area breaks down, although the first bearish objective at 0.7505 – the 200-day moving average – is not too far from current level. A more import support is the prior swing point at 0.7445, a decisive break below here could send the unit tumbling towards the low 0.70s again. Meanwhile in the event that the Aussie again bounces back here then the key short-term resistance levels to watch are at 0.7630 and 0.7690. But for as long as the 0.7720 level holds, it remains in danger of a sharp drop. 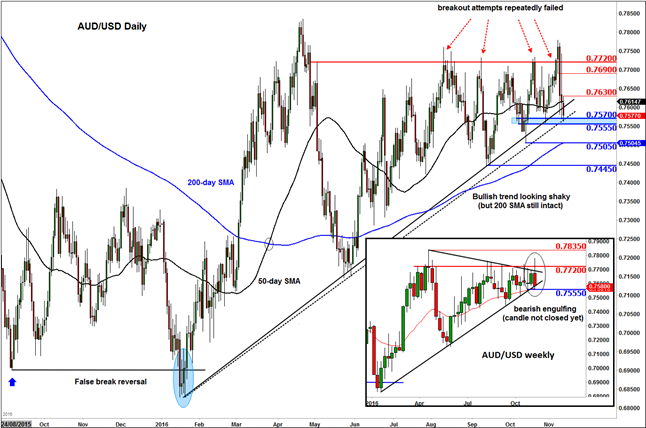