A couple of FOMC members have spoken in favour of a sooner rather than later rate increase...

The dollar has surged higher today. I don’t think the trigger was Donald Trump’s speech, because that was short on detail. Instead, it is the sharp rise in the probability of a Federal Reserve rate rise in March. The Fed Funds Futures have been rising even before Trump spoke and now point to an 80 per cent probability of a rate hike at the Fed’s next meeting on 14-15 March. To put things into context, just last week this stood at under 35%. So what triggered the sharp rise? Well, the Fed itself. A couple of FOMC members have spoken in favour of a sooner rather than later rate increase. Philly Fed president Patrick Harker reiterated that the economy is in a good shape and that he sees three rate increases as appropriate in 2017. But it was William Dudley, the New York Fed chief, who caused the biggest spike as he said that the case for a Fed tightening has become “a lot more compelling.”

But is the dollar getting ahead of itself? There is still the small matter of the monthly jobs report – due for release next Friday – that needs to be considered. Imagine we see a massive surprise to the downside – how will that affect the Fed’s thinking? What’s more, Janet Yellen will not speak until this Friday. What if she dismisses the prospects of a March rate hike?  Although a small possibility, it is a possibility nonetheless. And what if a March hike is priced in now? So, I wouldn’t rule out the possibility of a dollar pullback after this sizeable rally. But essentially the fundamental outlook remains bullish for the greenback since no other major central bank is even close to rising rates.

As a result of the dollar’s broad-based rally, the dollar Index has risen above its recent short term resistance at 101.70. It has thus moved back above the 50-day moving average again and looks like it is heading towards 102.05. This is where the 61.8% Fibonacci retracement level against this year’s high meets the potential right shoulder of a Head and Shoulders reversal pattern. Now at this stage there is no way of knowing whether this 102.05 level will hold as resistance, but if the DXY were to test this level and move back below the now broken 101.70 level this would be rather bearish. In this potential scenario I would then expect the DXY to drop towards – and probably below 100 – before it potentially surges back higher at some point down the line. Alternatively, if the 101.70 holds as support and the DXY establishes a base above it then the most likely outcome would be for the dollar to revisit this year’s earlier high at 103.80 and potentially break above it. So those are the two scenarios we will be watching closely this week. 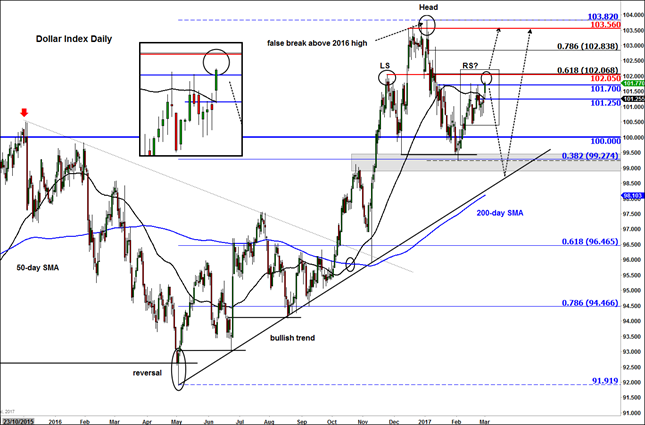