With the US stock markets on course to record their worst performance for a December since 1931 during the Great Depression, some investors are undoubtedly feeling cautiously optimistic that the Federal Reserve will prevent that by delivering a dovish rate rise or ideally no hike at all today and that this will trigger a rally in equities.

With the US stock markets on course to record their worst performance for a December since 1931 during the Great Depression, Donald Trump some investors are undoubtedly feeling cautiously optimistic that the Federal Reserve will prevent that by delivering a dovish rate rise or ideally no hike at all today and that this will trigger a rally in equities. Ahead of the FOMC rate decision, US index futures have pushed higher after a late sell-off on Wall Street yesterday – which was driven in part by a slump in oil prices – saw the indices relinquish their earlier gains. European markets were also firmer at the time of writing, with the UK’s FTSE 100 up 0.8% and Germany’s DAX 0.4% higher. Italian stocks were up 1.7% after the government said it had reached a budget agreement with the EU. But as far the US markets are concerned today, will the Fed’s potential promise to hold off hiking in 2019 be enough to support stock prices from falling further?

Well, with the European Central Bank last week delivering a more dovish outlook, and the central banks of England and Japan likely to follow suit on Thursday, a dovish Fed today could provide at least a temporary relief for US and global stock markets, you would think. However, I, for one, would not be surprised if the relentless selling then resumes on Wall Street regardless of the Fed’s decision today. Global growth concerns arising from China and other emerging markets, ongoing Brexit uncertainty and the prospects of a US government shutdown are among the reasons that might keep the bulls discouraged from making a meaningful comeback just yet. There’s also a possibility that the Fed will want to sound more optimistic about the economy and thereby give an inadvertent hawkish signal to the markets today, which would surely be bad news for the higher-yielding equities. Conversely, the outlook for a slower pace of rate hikes could easily be interpreted as a sign of weakness for the economy; that could also put more pressure on stocks. So, the reaction of the stock markets to the outcome of today’s Fed meeting is not going to be a straight forward one.

Ignoring the fundamentals, the charts of benchmark global equity averages don’t look too great at the moment. Indeed, the major US indices are now lower on the year after making a series of lower lows and lower highs over the past few months. The trend has been bearish, in other words, and could get even stronger. Trends are not easily reversed, as some would point to arguably the longest bull market in history since 2009. I do think that the indices have suffered too much technical damage which will require a lot of time and choppy price action to repair. It could take several months or even quarters. Granted, we might get a rally here and there, but unlike before, the selling pressure could quickly resume given the above fundamental considerations and the recent technical damage.

As far as the S&P 500 is concerned, well one of the major short term bearish objectives has now been met. For a long time, we were expecting the index to re-test the February lows at 2529/30 area, after it had formed a major reversal pattern when it failed to hold above the January high between late-August to early-October. This level has now been tested a couple of times and we have seen an oversold bounce from there already. But the more a level is tested, the more likely it will break in the direction of the test. So, don’t be surprised if that 2529/30 level were to give way in due course. If that does happen, then things could turn really ugly.

For me to turn bullish again, we will need to see the S&P make a distinct higher high again. The most recent high was at 2886 hit earlier this month. So, this level is now the line in the sand for us. But plenty of additional resistance levels stand in the way of that target, including, for example, 2591 and 2636. 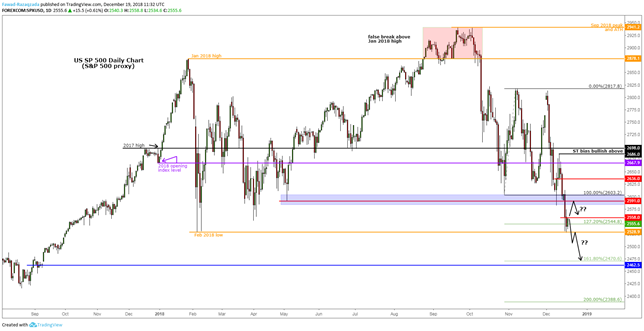