#UK - IRELAND#
Antofagasta, a mining giant, posted a 2Q production report: "Group copper production in Q2 2020 was 177,700 tonnes, a decrease of 8.4% compared to the previous quarter, (...) Group copper production in the first six months of the year was 371,700 tonnes, in line with expectations and 4.0% lower than in the same period last year. (...) Gold production for the quarter decreased by 29.3% to 46,000 ounces compared with Q1 mainly due to lower grades at Centinela, and for the first six months decreased by 25.5% to 111,100 ounces. (...) Molybdenum production was 3,100 tonnes, some 700 tonnes higher than previous quarter. For the year to date, production was 5,500 tonnes, 14.1% lower than in the same period last year. (...) Group copper production guidance is unchanged at the lower end of the original 725-755,000 tonnes guidance range, on the basis that no COVID-19 related shutdowns are required during the rest of the year."

Melrose Industries, an investment company, released a 1H trading statement: "In the Period Group revenue declined by 27% which was reflective of trading in line with expectations until mid-March 2020 followed by a steep decline in the second quarter. (...) The Group was loss-making in the second quarter of this year, but rebounded to be breakeven at the adjusted operating profit level in the month of June as recovery started to take place.  This means Melrose is likely to make a small adjusted operating profit in the Period."


#FRANCE#
Valeo, an automotive supplier, announced that it swung to a 1H net loss of 1.22 billion euros from a net profit of 162 million euros in the prior-year period, citing 622 million euros one-off charges related to the Covid-19 crisis. Also, EBITDA declined 83% on year to 202 million euros on revenue of 7.06 billion euros, down 28%.
From a chartist point of view, the stock price has broken below a short term rising trendline. The share is trading between its 20 and 50 DMAs, while the RSI lacks momentum around its neutrality area at 50%. As long as the horizontal resistance threshold at 25.5E is not bypassed, the risk of a break below the support threshold at 22.3E will remain high with the horizontal support at 19.35E and the 50% Fibonacci retracement at 18.06E as next bearish targets. Alternatively, a rebound above 25.5E would reinstate a bullish bias. 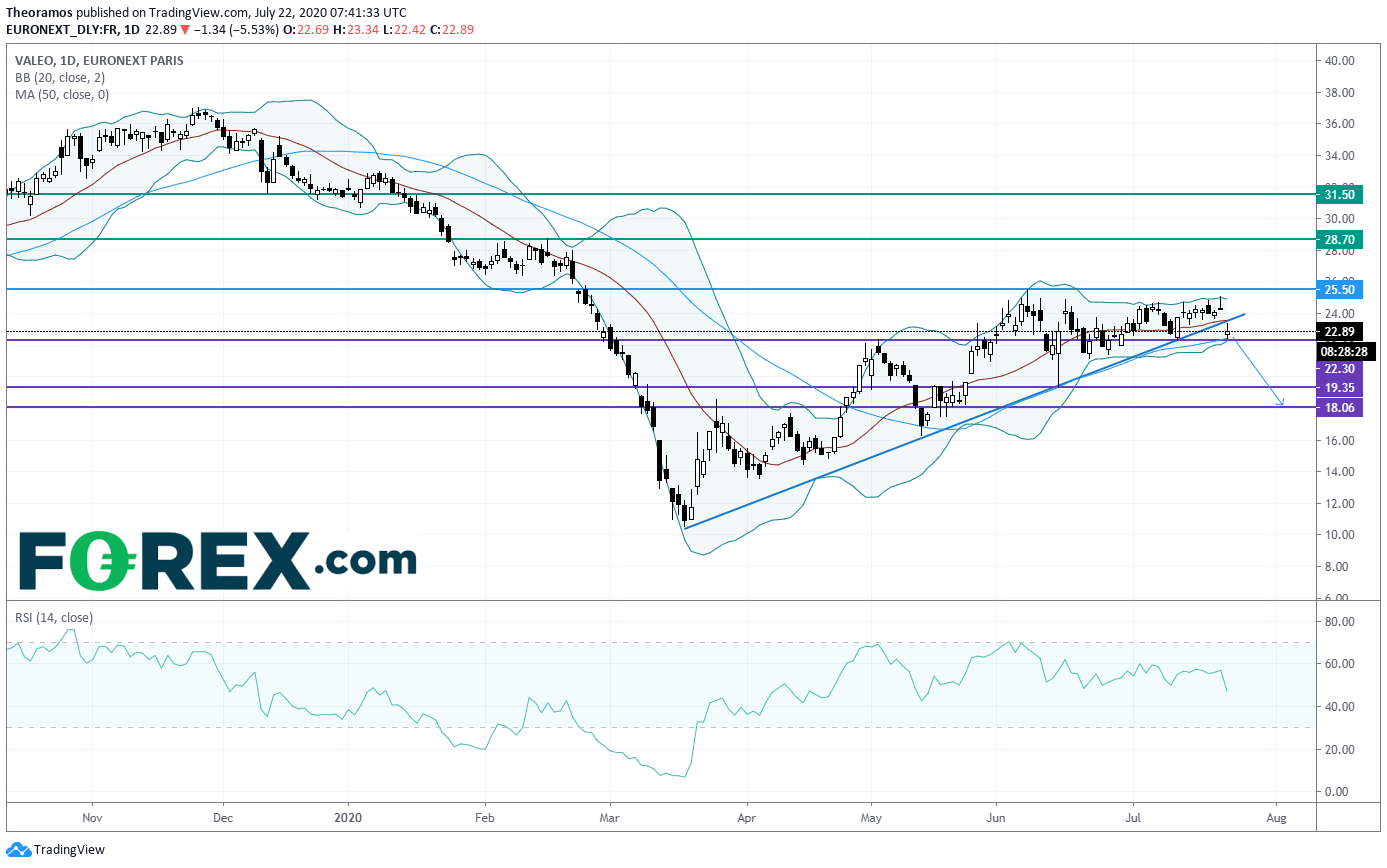 Ubisoft, a video game company, is expected to release a 1Q trading update.

Ipsen, a pharmaceutical company, was upgraded to "overweight" from "neutral" at JPMorgan.


#BENELUX#
Akzo Nobel, a chemicals group, announced that 2Q net income dropped 44% on year to 129 million euros and adjusted EBITDA slid 19% to 321 million euros on revenue of 1.99 billion euros, down 19% (-17% at constant currencies).
From a charist point of view, the stock price is supported by a rising trend line since March. The 20DMA has played the role of support and the RSI is

Proximus, a Belgian telecommunications group, was upgraded to "buy" from "hold" at HSBC.


#SWITZERLAND#
ABB, a power and automation company, reported that 2Q net income jumped 398% on year to 319 million dollars, "benefited mainly from the absence of the charge booked in 2019 in relation to the sale of the solar inverters business". Meanwhile, operational EBITA fell 21% to 651 million dollars on revenue of 6.15 billion dollars, down 14% (-10% on a comparable basis).

Lindt & Sprungli, a chocolatier and confectionery company, was downgraded to "underweight" from "equalweight" at Barclays.