European stock indices, including the UK’s FTS 100, came sharply off their earlier highs ahead of the outcome of UK Prime Theresa May’s key cabinet meeting, likely to be after 17:00 GMT. Doubts have risen whether she will be able to win her colleagues' support for the draft Brexit agreement as some Brexiteers fear it will keep the UK locked into EU rules for many years to come.

European stock indices, including the UK’s FTS 100, came sharply off their earlier highs ahead of the outcome of UK Prime Theresa May’s key cabinet meeting, likely to be after 17:00 GMT. Doubts have risen whether she will be able to win her colleagues' support for the draft Brexit agreement as some Brexiteers fear it will keep the UK locked into EU rules for many years to come. As well as Brexit, European stocks have also been undermined recently by other major global macro factors – for example, concerns over demand from China, where a lot of German luxury cars are exported to, owing the ongoing trade dispute between the US and China. Sentiment has also been hit by the recent currency crises in emerging markets, hurting demand for luxury goods such as Apple’s iPhones. The German DAX index has been the hardest hit among European indices. Regardless of what happens this evening, where the likes of the FTSE and DAX are headed in the slightly longer-term outlook will depend to a large degree on the outcome of trade talks between the US and China as we head towards the end of this year.

DAX hit by multiple blows but could a strong dollar support EU markets?

If the world’s largest economies sort out their trade dispute then this should help to revive optimism over demand for Eurozone exports in 2019, which should alleviate some of the pressure from German stocks. Within Europe, though, ongoing concerns over Brexit and Italy’s budget, as well as the prospects of the German economy falling into a recession – with preliminary third quarter GDP today showing a 0.2% drop in growth – could limit the upside potential for German stocks. What’s more, the European Central Bank is likely to hike interest rates after the summer of next year, for the first time since 2011. The ECB has already tapered its asset purchases programme which is set to end next month. With monetary conditions set to tighten in the Eurozone, things are not looking too great for German equities heading into next year. That being said, interest rates are unlikely to rise sharply and will remain around historically low levels for the foreseeable future. What’s more, the prospects of any positive developments regarding the Brexit or Italy situations, or in the US-China trade dispute, could lead to at least a short-term rally in risk assets across the board. Another source of support for EU stocks could come from higher levels of demand from the US for European goods and services, owing to an improving economy there and a strong dollar. So, it is not all doom and gloom.

For now, though, the DAX remains entrenched in a bearish trend as it continually makes lower highs and lower lows. Unless that structure changes one should expect to see further pain rather than gain. The long-term key support range is around 10690-10825 range as per the chart below. If we get there, that’s where we think we might see a more noticeable bounce from. However, it is possible the index pushes higher from here without that deep a pullback first. As such, it is important to watch the most recent highs closely in case they break. This makes the 11855 level particularly important. IF we go above that level then the short-term bias would flip to the bullish side. 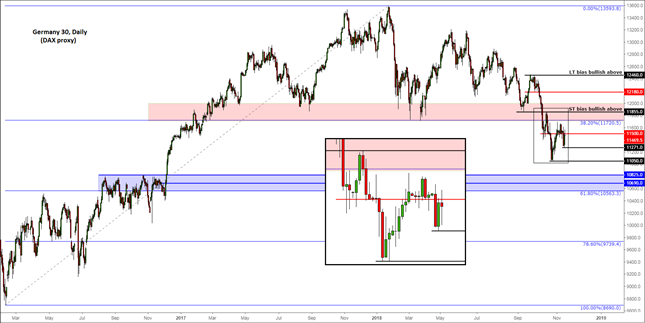