EUR/JPY extends gains in the aftermath of BOJ rate cut

EUR/JPY extended its gains further on Monday following last week’s surprise interest rate cut into negative territory by the Bank of Japan (BoJ). That unexpected rate cut sent the yen reeling against other major currencies, as it reaffirmed the BoJ’s aggressive easing stance.

In the wake of this action, USD/JPY, which had risen sharply late last week on a plunging yen, pulled back on Monday due to dollar weakness prompted by the ramifications of the BOJ’s decision on the Federal Reserve’s own monetary policy. With Japan further entrenched in a clear-cut easing cycle, the Fed may well be discouraged in continuing its previously intended pace of rate hikes in the US.

In the case of EUR/JPY, however, the falling yen and a relatively strong euro continued to push up the cross pair on Monday, extending last week’s steep gains.

From a technical perspective, the past week-and-a-half have seen a sharp rise from major support around the key 126.00 level. The daily candlestick that formed at that level was a "hammer" candle (small upper body, long lower shadow), which is generally considered an upside reversal pattern. After this pattern completed and EUR/JPY began its sustained surged, the currency pair broke out above the key 130.00 psychological resistance level by late last week when the BoJ announced its rate cut.

Having made a bold statement last week with its easing actions, the Bank of Japan has sent out a clear signal of its perspective and intention. This supports the potential for extended actions in the future that could weigh even further on Japan’s currency.

With any additional upside momentum on the current EUR/JPY surge, the next major bullish target is currently at the key 134.00 resistance level, which is also where the 200-day moving average is currently situated. Above 134.00, another important upside target is at the 137.00 level. To the downside, any significant re-breakdown below the noted 130.00 psychological level, now as support, would invalidate the bullish scenario. 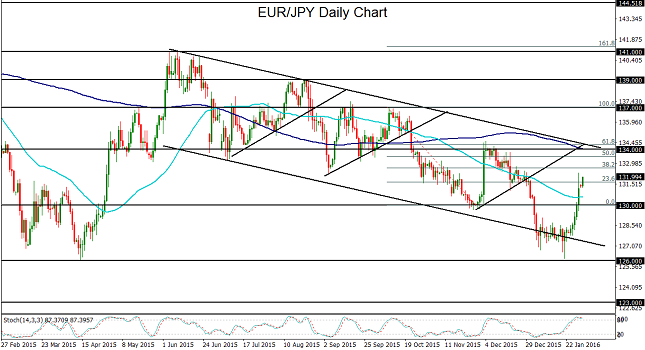