EUR/JPY extended its recent free fall on Wednesday as concerns over a UK exit from the European Union continued to pressure both the euro and sterling, and an oil-driven equities plunge drove up the safe haven Japanese yen.

British multinational bank, HSBC, warned on Wednesday that a "Brexit" would significantly damage both economic growth in the UK as well as the value of the British pound. As a result, sterling dropped sharply against other major currencies. Although the pound also fell against the euro, the shared currency has likewise been under substantial pressure from the prospects of a UK exit from the EU.

Also on Wednesday, global equity markets continued to retreat as crude oil prices fell for the second consecutive day after the Saudi oil minister crushed any previous hopes for concerted production cuts among oil-producing nations. Even less ambitious hopes for a coordinated output cap were discouraged when Iran’s oil minister dismissed any expectations that his country might participate in the proposed deal to freeze output at January’s levels. To make matters even worse, the American Petroleum Institute reported on Tuesday that crude oil inventories rose by over 7 million barrels last week, far surpassing previous estimates of a 3.4-million-barrel increase.

With global equity markets recently correlated very closely with plunging crude oil prices, US and European stocks fell broadly early on Wednesday. This, in turn, prompted a resumed flight towards the perceived safety of the Japanese yen.

This combination of a sinking euro and rising yen has driven the steep plummet in EUR/JPY for the past month. This drop recently accelerated below a large descending trend channel, and has just reached an intermediate downside target around the 123.00 support level to establish a new multi-year low. This target is also around the 161.8% Fibonacci extension of the most recent upswing in late January. With any further downside momentum for the currency pair resulting from persistent stock market and crude oil volatility combined with continued Brexit concerns, sustained trading under the noted 123.00 level could target the next major downside objective at the 119.00 support level. 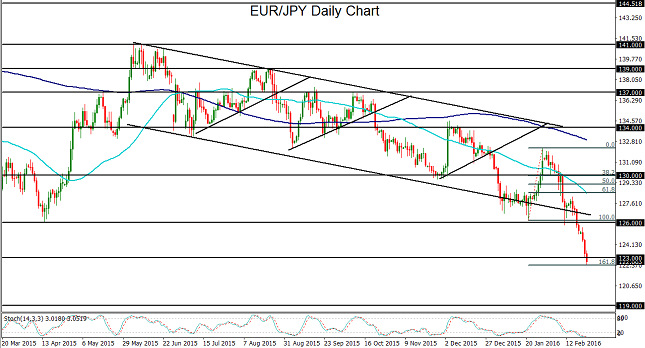