EUR/JPY: Reason for optimism ahead of the BOJ?

<p>After <a href="http://www.forex.com/post?SDN=c0a7411a-97c7-4888-808a-82104f884bc7&Pa=20db1fa6-e674-420c-9a87-2ee29261d638">yesterday’s snoozer of a Federal Reserve meeting</a>, traders are understandably a bit disappointed that we’ll have another seven weeks of data-watching before the chance of another rate increase from the world’s largest central bank. Before tuning out from the markets for the week though, traders should note that another major central bank faces a much tougher decision tonight.</p>

After yesterday’s snoozer of a Federal Reserve meeting, traders are understandably a bit disappointed that we’ll have another seven weeks of data-watching before the chance of another rate increase from the world’s largest central bank. Before tuning out from the markets for the week though, traders should note that another major central bank faces a much tougher decision tonight.

The Bank of Japan commenced one of their frequent monetary policy meetings yesterday and will finish deliberations tonight. With inflation still running well below the central bank’s 2% target, exports struggling, household consumption subdued, and even today’s resignation of Japan’s Economy Minister, you could certainly make a case for more easing this week, perhaps through an expansion of the bank’s quantitative and qualitative easing (QQE) program.

That said, most analysts expect the BOJ to hold off in this week’s meeting. In some ways, one of the most important considerations for the central bank is the value of the yen (talk about the tail wagging the dog!). With the widely-watched USD/JPY pair bouncing off strong previous support in the 116.00 zone last week to trade back around 119.00, the yen is essentially unchanged against the US dollar since Q4 2014. While the currency has strengthened against many of its other major rivals, USD/JPY is still the most widely-watched measure of the yen’s value, and many believe that the BOJ can afford to wait as long as the 116.00 support level holds.

Since we covered USD/JPY in depth on Monday, we wanted to take a look at another major yen cross: EUR/JPY ahead of tonight’s BOJ announcement. EUR/JPY has been in a prolonged downtrend over the seven months, with rates falling from above 140.00 all the way down to last week’s low near 126.00 over that period. However, the near-term technical signs are showing signs of a potential bounce.

For one, last Thursday’s price action formed a big Bullish Pin Candle* off previous support at 126.00. This candlestick pattern shows a shift from selling to buying pressure and is often seen at near-term bottoms in the market. The fact that this candle formed with the RSI indicator in oversold territory only strengthens the likelihood of a near-term rally.

With the MACD indicator also turning higher, there are signs that the short-term momentum is shifting in favor of the bulls. Therefore, if the BOJ does surprise traders by easing policy, a bullish move up toward the 100-day MA at 132.00 is a distinct possibility. On the other hand, we could see a modicum of near-term EUR/JPY weakness (yen strength) if the BOJ holds the line on monetary policy, but the constructive technical picture still could take EUR/JPY higher of the coming days. 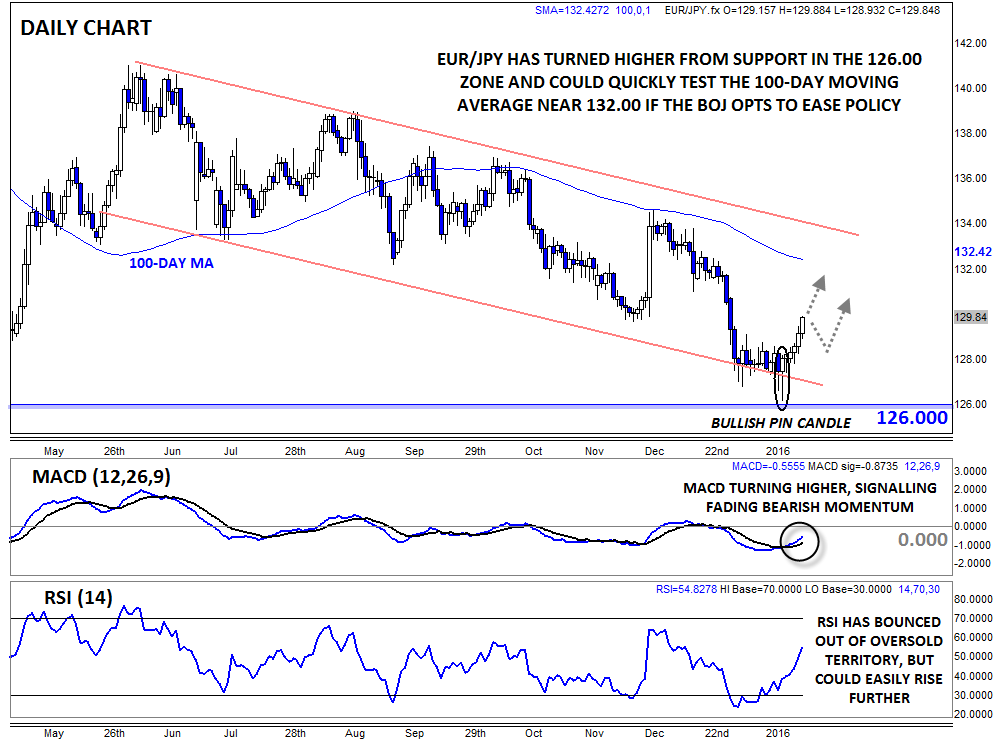