<p>Both sterling and the euro found some relief on Tuesday with relatively modest bounces as profit-taking on short positions occurred after recent sharp declines, and the markets took a tentative breather from Brexit concerns. As may have been expected on such a breather, global stocks also generally bounced and safe haven gold fell from its recent long-term highs. Another major safe haven asset, the Japanese yen, which had been in exceptionally high demand after the historic outcome of last week’s British EU referendum, subsequently made a retreat on Tuesday.</p>

Both sterling and the euro found some relief on Tuesday with relatively modest bounces as profit-taking on short positions occurred after recent sharp declines, and the markets took a tentative breather from Brexit concerns. As may have been expected on such a breather, global stocks also generally bounced and safe haven gold fell from its recent long-term highs. Another major safe haven asset, the Japanese yen, which had been in exceptionally high demand after the historic outcome of last week’s British EU referendum, subsequently made a retreat on Tuesday.

Despite this turn of events in the direct aftermath of the highly market-moving Brexit decision, fundamental pressure on the euro remains strong, particularly in light of the turmoil in European economic and financial markets that has resulted from Brexit. This turmoil may compel the European Central Bank to implement further stimulus measured that could weigh heavily on the euro. Additionally, a potential loss of confidence in the viability of the European Union due to the UK’s vote to exit, especially if other EU countries eventually begin to follow suit, should also put into question the viability of the euro common currency.

If such a scenario plays out, it could also continue to impact the Japanese yen, which has recently been strongly boosted due to its traditional appeal as a safe haven currency during times of economic and financial volatility. Despite Japan’s wish to limit the strength of its currency, the yen has remained on a sharp incline due in part to its status as a safer alternative to riskier assets. While this continues to be true, the possibility is ever-present of an abrupt Japanese intervention with the objective of weakening the yen, especially in light of its current strength. In spite of this possibility, however, Japan has not been particularly successful in the recent past when it has attempted to reign-in the yen.

For EUR/JPY, the noted impending pressure on the euro coupled with support for the safe haven yen in the post-Brexit environment of uncertainty and volatility, is likely to result in additional downside momentum for the currency pair. As it currently stands, EUR/JPY continues to be entrenched within a long-term downtrend. The Brexit-driven plunge late last week prompted a sharp continuation of that downtrend, pushing the currency pair down to hit a new 3½-year low at 109.52 before the current relief bounce. Despite this bounce, EUR/JPY remains strongly bearish if it continues to trade under the 116.00 resistance (former support) area. On any resumption of the bearish trend after this relief rally, the next major downside targets are at the 111.00, 108.00, and then 105.00 support levels. 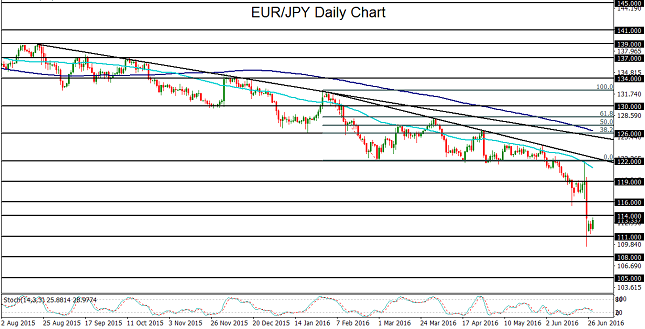