EUR/JPY started the week in renewed rally mode as the safe haven yen retreated further after having temporarily surged earlier on news of the attempted coup in Turkey. The heightened risk appetite in the markets from the past week has extended to the beginning of this week, and the failed coup has been summarily shrugged off by the markets. As a result, the appeal of safe haven assets like gold and the Japanese yen has deteriorated significantly, boosting both USD/JPY and the yen crosses within the past week.

EUR/JPY started the week in renewed rally mode as the safe haven yen retreated further after having temporarily surged earlier on news of the attempted coup in Turkey. The heightened risk appetite in the markets from the past week has extended to the beginning of this week, and the failed coup has been summarily shrugged off by the markets. As a result, the appeal of safe haven assets like gold and the Japanese yen has deteriorated significantly, boosting both USD/JPY and the yen crosses within the past week.

Also weighing on the Japanese yen since last week have been concrete promises of a new round of comprehensive monetary easing measures from Japan’s Prime Minister Shinzo Abe and his reinvigorated Abenomics stimulus policies.

Meanwhile, from the European side, the euro was modestly higher overall on Monday, but has generally been range-bound against the US dollar since its sharp fall in the immediate aftermath of June’s Brexit vote. Coming up on Thursday this week will be another major risk event for the euro – the European Central Bank’s (ECB) rate decision and press conference. In the event that the habitually dovish ECB indicates even more aggressive stimulus measures, it could mean a further fall for the euro against its major currency counterparts.

These two complementary, yet conflicting, forces – Japanese stimulus and European stimulus – are likely to impart heightened volatility on EUR/JPY for the next few weeks, potentially pulling the currency pair in opposing directions.

As it currently stands, the risk-on market environment coupled with the virtually inevitable monetary easing by Japan has boosted EUR/JPY from near its multi-year lows around 111.00 support last week up to approach the 118.00 resistance level. This level is also where the 50-day moving average is currently situated, as well as the 50% Fibonacci retracement of the down-move from the late-April high down to the post-Brexit low. With any continued upside move above this resistance as Japan’s monetary policy unfolds, the next major short-term target is around the key 122.00 resistance level. The ECB decision on Thursday, however, could very well hinder EUR/JPY’s rebound, potentially prompting the currency pair to turn back down below 116.00 to target the noted 111.00 support level once again. 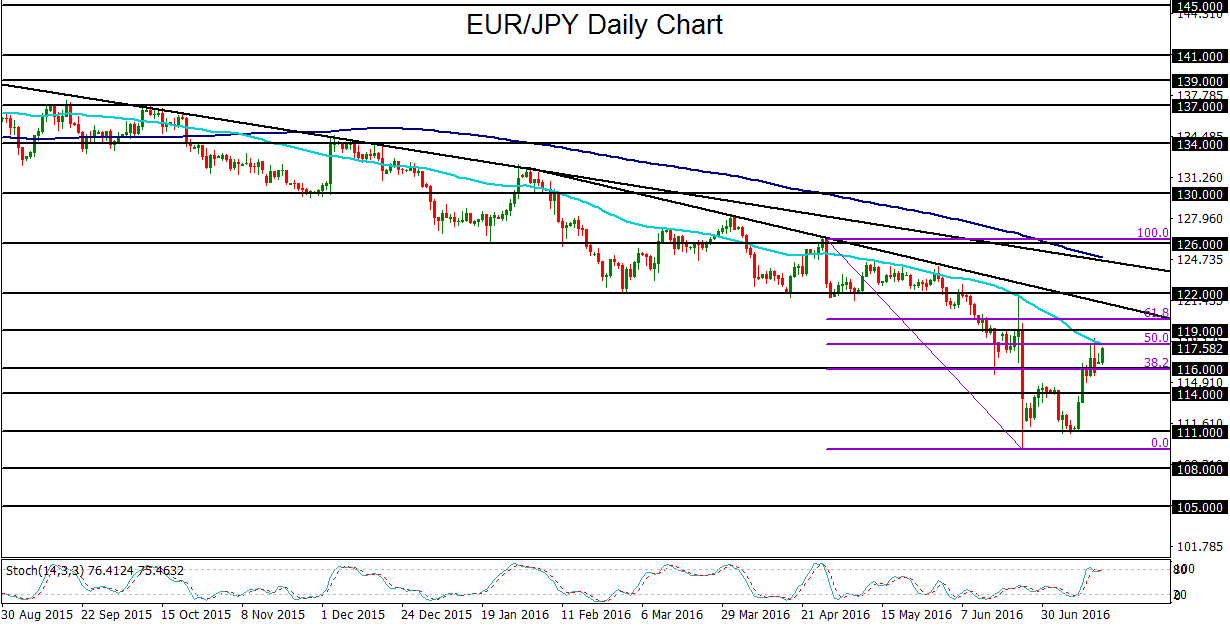