EUR USD All about Brexit vote next week

<p>Volatility could spike in the days leading up to and during the EU referendum on Thursday, providing plenty of short-term trading opportunities for FX traders. A lot hinges on the outcome of this vote. I think that a remain outcome could send the EUR/USD rallying towards the 1.1450-1500 area, while a vote to leave could see the world’s most heavily-traded pair drop back towards the March 2016 lows of around 1.0820/50 area at the very least.  </p>

This week was dominated by headlines and opinion polls regarding the UK’s June 23 EU referendum, and central bank inaction as the Fed, BoJ, SNB and – needless to say – BoE, all decided to keep their policies unchanged. The pound fell, stocks tumbled and yen soared. However, Thursday’s tragic killing of Labour MP Jo Cox saw both Brexit and Leave camps suspend their campaigns. This led to speculation that the Leave camp will now lose support and the bookies cut their odds for Brexit and GBP staged a short-covering bounce accordingly.

The EUR/USD also huffed and puffed but ultimately made little progress on the week as Brexit concerns kept the EUR bulls on the side-lines and helped to offset USD selling pressure on the back of a more dovish-than-expected Federal Reserve. Economic data relevant to the EUR/USD is somewhat lighter next week, with the exception of German ZEW Economic Sentiment (Tuesday), Eurozone Flash PMIs (Thursday) and German Ifo (Friday), as well as some second-tier US macroeconomic pointers. But that doesn’t mean volatility will be any less.

In fact, volatility could spike in the days leading up to and during the EU referendum on Thursday, providing plenty of short-term trading opportunities for FX traders. A lot hinges on the outcome of this vote, as we have discussed below. I think that a remain outcome could send the EUR/USD rallying towards the 1.1450-1500 area, while a vote to leave could see the world’s most heavily-traded pair drop back towards the March 2016 lows of around 1.0820/50 area at the very least.

Scenario 1: UK public votes to stay in the EU

If the UK public votes to stay within the EU then surely the pound will rally on relief and short-covering, which should pressurise the EUR/GBP cross. But as far as the EUR/USD pair is concerned, the response will not be that straight forward. On the one hand, a stay vote is deemed positive for the EU economy as it is for the UK. Thus, in this scenario, one would think that the EUR/USD will rally. On the other hand, however, a vote to stay could also lead to renewed calls for a rate hike in the US, for the Federal Reserve has suggested that Brexit is among the concerns holding the FOMC back from increasing interest rates again. So the EUR/USD’s response in this potential scenario may well be positive initially, which could see price rally to the key 1.1450-1500 resistance area (see the technical details, below). But whether the potential rally will last long or go decisively beyond 1.1500, I am not so sure. After all, I remain fundamentally bearish on the EUR/USD exchange rate given the growing divergence of monetary policy between the Eurozone and US central banks.

However, if the unthinkable happens and the UK votes to leave the EU, the EUR/USD’s response will likely be a swift sell-off, as this scenario is still not the base case for many analysts and traders alike and the risks may therefore be under-priced. That being said, the likely sell-off will probably not be as bad for the EUR as it may well be for the GBP since the UK economy relies more on the EU for its exports than the EU does on the UK for its overseas shipments. Still, the USD is likely to find some safe haven flows, which should ultimately pressurise all the USD pairs, including the EUR/USD.

Ahead of the EU referendum, let’s remind ourselves about the fact that the EUR/USD is effectively stuck inside a long-term consolidation range with repeated failures around 1.15, as highlighted on the weekly chart. With that in mind, traders should treat any short-term rallies cautiously, especially around the 1.1450-1500 key resistance area. Indeed, many speculators who are on the side-lines for now and bearish on the EUR/USD exchange rate will no doubt be looking to fade the rallies there, too.

However, within the consolidation, price action has been mostly bullish since the end of last year with the EUR/USD putting in a few higher highs and higher lows. More recently, at the end of May, the EUR/USD formed a large bullish engulfing candlestick pattern on its weekly chart as the buyers stepped in to defend the now-rising 55-week and 200-day moving averages and a bullish trend line around 1.1100. But in recent weeks, that bullish momentum appears to have faded once again and as we go to press the EUR/USD was once again testing this rising trend line, now at around 1.1200 (see the daily chart). However as price is still holding above low of that engulfing candle (1.1100), the bulls appear to be just about edging it in terms of control.

So, for as long as this 1.1100 level holds as support, the bulls will be hopeful that at the very least the EUR/USD will go for yet another test of the noted 1.1450-1500 area before it decides on its next move. A potential break below 1.1100 however could pave the way for another move towards the lower end of the long-term range, near 1.0500, with an intermediate long-term support (and therefore a bearish target) being at around the 1.0800/50 area. 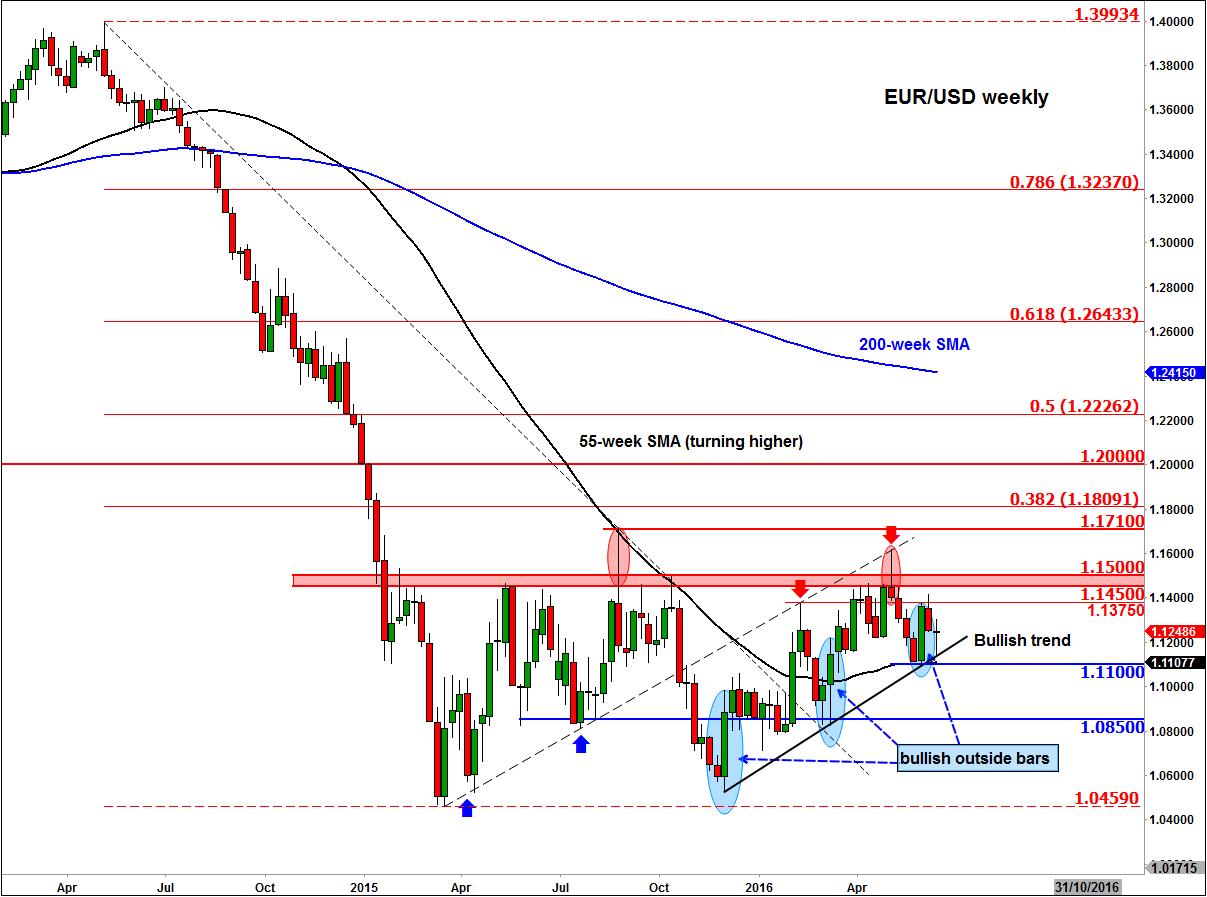 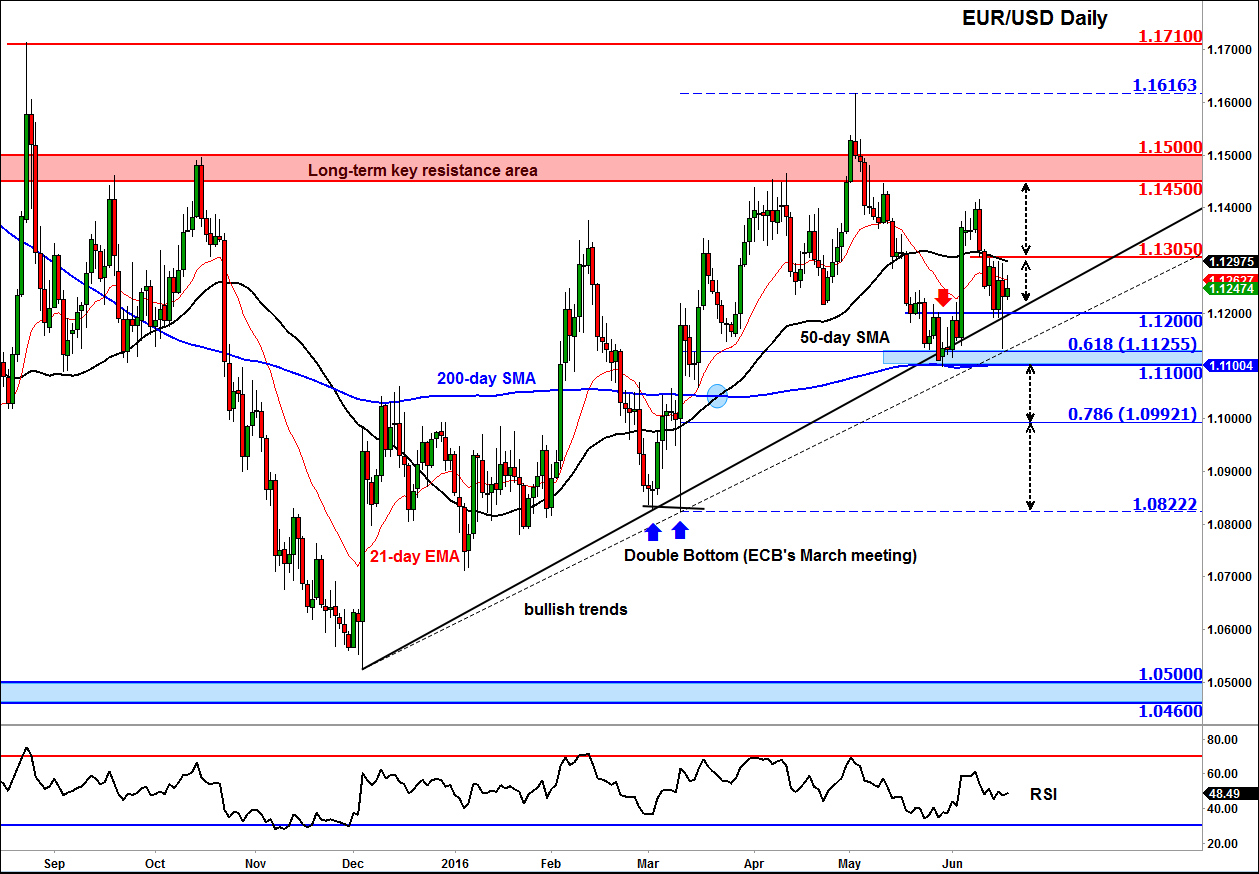