The EUR/USD is trading higher for the fourth consecutive day as traders continue to dump the US dollar after the Federal Reserve Chairwoman Janet Yellen pulled a dove out of the Fed's hat earlier this week. Her exceedingly cautious outlook on the US economy has been interpreted as a sign that interest rates will remain at their current low levels for longer than expected. Her views will be put to the test given the sheer number of top-tier US macroeconomic data coming up this week, including the March payrolls numbers and average hourly earnings, a measure of inflation, on Friday. Meanwhile the latest data from the Eurozone shows that the economy is still in deflation and the recovery remains anaemic. That being said, the core CPI measure of inflation actually exceeded expectations. It came in at a solid rate of 1.0% year-over-year for March versus 0.9% expected and 0.8% in February. In contract, the headline CPI figure printed -0.1% year-over-year, although it too improved slightly from the prior month’s -0.2% reading. The rest of this morning’s Eurozone data generally disappointed, with German retail sales falling 0.4% month-over-month in February while the number of unemployed people there was unchanged. This however wasn’t enough to derail the EUR/USD’s rally.

The last time I looked at the EUR/USD was on Tuesday of last week, when the world’s most heavily-traded currency pair was testing a key support level around 1.1200 (see "EUR/USD: Golden Cross Imminent," for more). Then, I was anticipating a rally due to a reoccurring pattern that had emerged since the ECB’s introduction of more QE in early March failed to push the pair below the 1.08 handle. Although the EUR/USD went on to break below the 1.1200 support level, which momentarily raised question marks over the developing bullish trend, the stay below that level was short-lived. Once the bulls reclaimed the 1.12000 handle, they haven’t looked back with the pair now up, as mentioned, for the fourth consecutive day.

Today the EUR/USD has broken another resistance level around 1.1330 and was testing the February high at 1.1375 at the time of this writing. A decisive break above this level could pave the way for a rally towards the psychological 1.1500 handle or even the August 2015 high at 1.1710. Meanwhile a potential break back below the 1.1330 support level would be deemed a bearish development. This could happen if this week’s key US data trounce expectations by an extent that a June rate hike would be put back on the table. That being said, the EUR/USD would still need to form a lower low below the 1.12 handle in order to completely change the technical outlook. But as things stand, the path of least resistance is clearly to the upside. 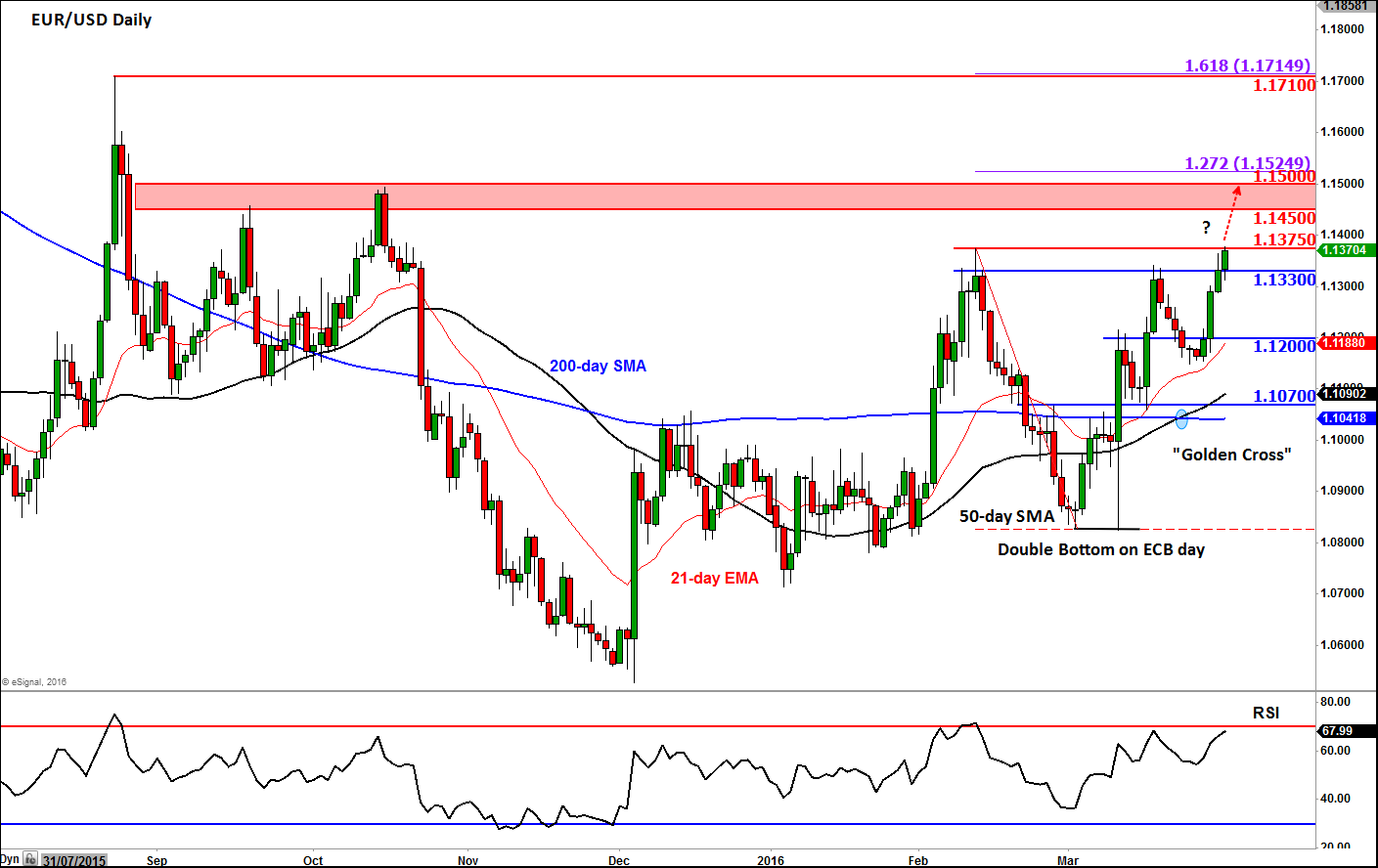